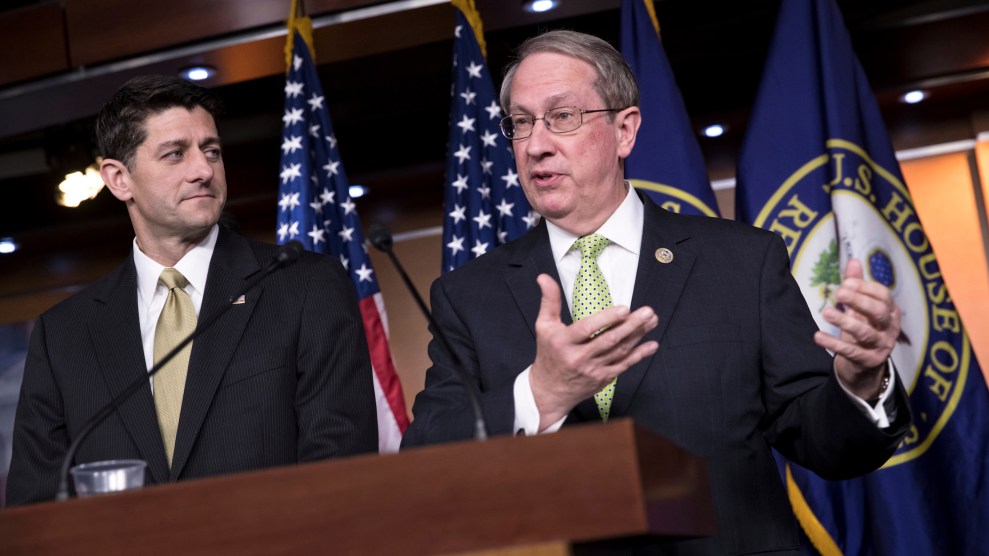 In his State of the Union address last week, President Donald Trump called for a “down-the-middle compromise” on immigration. Of course, Democrats don’t see his proposal that way, with its funding for a border wall and sharp cuts to family migration. But right-wing immigration groups don’t like it either, and they quickly attacked it as amnesty for Dreamers—undocumented immigrants who came to United States as children. That raises a question as Congress weighs Trump’s immigration plan: What exactly would satisfy hardliners?

The answer looks something like the Securing America’s Future Act, a 414-page Republican bill that covers almost every area of immigration policy. Rep. Bob Goodlatte’s (R-Va.) legislation, which has attracted 82 Republican co-sponsors, would treat Dreamers as criminals if they fall into poverty, and would deny Dreamers a direct path to citizenship.

House Speaker Paul Ryan (R-Wis.) has not said whether he will hold a vote on the bill, and it has essentially no chance of passing the Senate. But it shows where a sizable contingent of conservative Republicans in the House stand on immigration—and how hard it will be to craft any immigration bill that can actually become law.

Last year, Trump moved to end protections from deportation for the nearly 700,000 Dreamers who qualified under the Obama administration’s Deferred Action for Childhood Arrivals (DACA) program. A bipartisan group of senators hopes to replace DACA with the DREAM Act, which would provide a path to citizenship for DACA recipients and roughly 1 million additional Dreamers. Trump is now backing that approach, but only if it is paired with conservative priorities including a border wall and steep cuts to family-based immigration. United We Dream, the most prominent Dreamer advocacy group, has called Trump’s framework a “white supremacist ransom note.”

The Securing America’s Future Act, on the other hand, would provide protections only to DACA recipients. Instead of a path to citizenship, DACA recipients would be granted a permanent conditional status that needs be renewed every three years for $1,000. They would be blocked from receiving child tax credits and Obamacare subsidies. And to leave the country, they would need advance approval from the US government. Each trip abroad could not last more than 15 days.

Adults who aren’t in school full-time would lose contingent status if their income falls below 125 percent of the poverty line—making them subject to deportation. As David Bier at the libertarian CATO Institute writes, that would bar DACA recipients from staying at home to take care of children or retiring.

A separate section of the bill would make immigration violations crimes instead of civil offenses. Taken together, it means that poor DACA recipients would be treated as criminals. Gregory Chen, the director of government relations at the American Immigration Lawyers Association, says the criminal provisions would affect “Dreamers who initially qualify for protection but then lose their job and fail to meet the income requirements.”

But DACA is not really Goodlatte’s focus. The first 386 pages of the bill would, among other things, reduce legal immigration by 38 percent, according to CATO. That would be achieved by ending the diversity visa lottery for people from countries with low immigration rates to the United States and blocking US citizens from sponsoring their siblings and adult children for green cards. It would produce the largest immigration cuts since the United States blocked large numbers of Asian, Jewish, and Southern European immigrants in the 1920s. Other provisions would fund Trump’s border wall, make it significantly harder to claim asylum in the United States, and allow asylum seekers who arrive at the southern border to be sent to Mexico, even if they are from other countries.

Before the White House introduced its own immigration framework in January, Homeland Security Secretary Kirstjen Nielsen said the bill “reflects many of the policy principles and priorities identified by DHS’s frontline personnel which the Administration has advocated for this past year.” The Republican Study Committee, which includes more than 150 House Republicans, called Goodlatte’s bill “the framework” for immigration reform, adding that it opposes “any process for a DACA solution that favors a backroom deal with Democrats over regular order in the House.”

The Republican Study Committee has not weighed in since Trump proposed citizenship for Dreamers, but its usual allies on immigration have. Mark Krikorian, the head of the anti-immigration Center for Immigration Studies, called Trump’s approach “The Art of the Choke.” The right-wing news site Breitbart favored “Amnesty Don.” Dan Stein, the president of the populist-nationalist Federation for American Immigration Reform, accused Trump of offering a “massive amnesty vehicle.” He urged Trump to take up the Securing America’s Future Act instead.

Both Trump’s “compromise” and Goodlatte’s bill stand no chance in the Senate, where at least nine Democratic votes are needed to pass an immigration bill. But the criticism from the right still matters. Immigrant advocates are hoping Congress will add a Dreamer compromise onto a spending bill that includes conservative priorities like increased defense spending.

Even if the Senate succeeds with that approach, Ryan would likely have to defy many of his fellow Republicans by letting Democrats provide the votes needed to get a majority in the House. In 2013, bipartisan immigration reform passed the Senate with 68 votes before going nowhere among House Republicans who were opposed to citizenship for undocumented immigrants or fearful of being labeled “pro-amnesty” in a primary. Like his predecessor John Boehner, Ryan will likely be guided by how much compromise his colleagues on his right will tolerate.