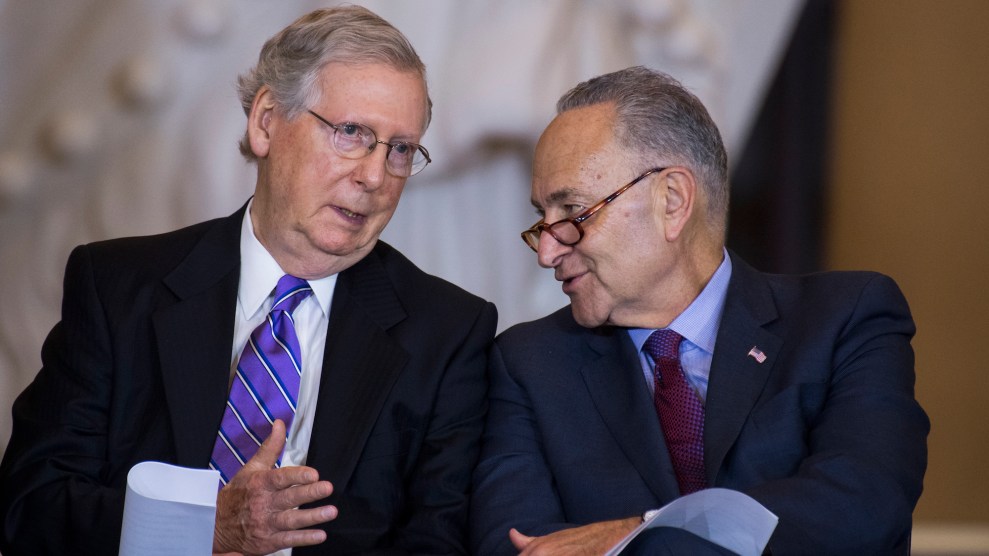 After months of stop-gap measures, Senate leaders say they’ve reached an agreement to fund the government for two years while raising spending levels. The budget deal would increase domestic and defense spending by about $300 billion, and provide an additional $90 billion of disaster relief, the Washington Post reports. Congress has until Thursday night to pass a funding bill to keep the government open.

The deal, brokered by Senate Majority Leader Mitch McConnell (R-Ky.) and Minority Leader Chuck Schumer (D-N.Y.), would provide billions of dollars in funding for Veterans Affairs hospitals, infrastructure, and the opioid crisis. It would also extend the Children’s Health Insurance Program for an additional four years, on top of the the six-year extension passed last month. In the coming weeks, lawmakers will turn the deal into specific spending legislation. In the meantime, the Senate is expected to pass another stopgap to avert a shutdown.

After months of fighting over the tax bill and immigration, McConnell and Schumer praised each other for their bipartisanship. “I particularly want to thank my friend, the Democratic leader,” McConnell said. Schumer responded by saying that “we have worked well together for the good of the American people” and called the deal a “genuine breakthrough.”

The compromise does not address the status of Dreamers, undocumented immigrants who came to the country as children. Last year, President Donald Trump ended an Obama-era program that protected hundreds of thousands of Dreamers from deportation. In January, Senate Democrats voted against a short-term spending bill because it did not provide protections for Dreamers. The three-day shutdown it triggered ended after McConnell agreed to allow debate on immigration legislation if Democrats backed a spending bill this week.

McConnell announced on Wednesday that he will not bring a specific immigration bill to the floor. Instead, he will allow Senators to introduce amendments to shape potential immigration legislation. McConnell said that the process will be “fair to all sides,” before adding that he cannot guarantee any outcome.

House Minority Leader Nancy Pelosi (D-Calif.) has said that she and many other Democrats will only back the spending deal if Speaker Paul Ryan (R-Wis.) agrees to hold a vote on an immigration bill that covers Dreamers. McConnell and Schumer’s agreement would likely need Democratic votes to pass the House.

Ryan has said Trump’s support is a precondition for any immigration bill that he brings to the House floor. The White House’s current immigration plan calls for trading a path to citizenship for Dreamers for border wall funding and steep cuts to legal immigration. Democrats and immigration advocates consider Trump’s framework a nonstarter.

After attacking Democrats for the January shutdown, Trump said on Tuesday that he’d “love to see a shutdown” if the spending bill doesn’t address his immigration priorities. “Without borders we don’t have a country,” Trump said. “So would I shut it down over this issue? Yes.”

The spending deal ignores Trump’s shutdown threat. According to Politico, the White House is likely to back it anyway.