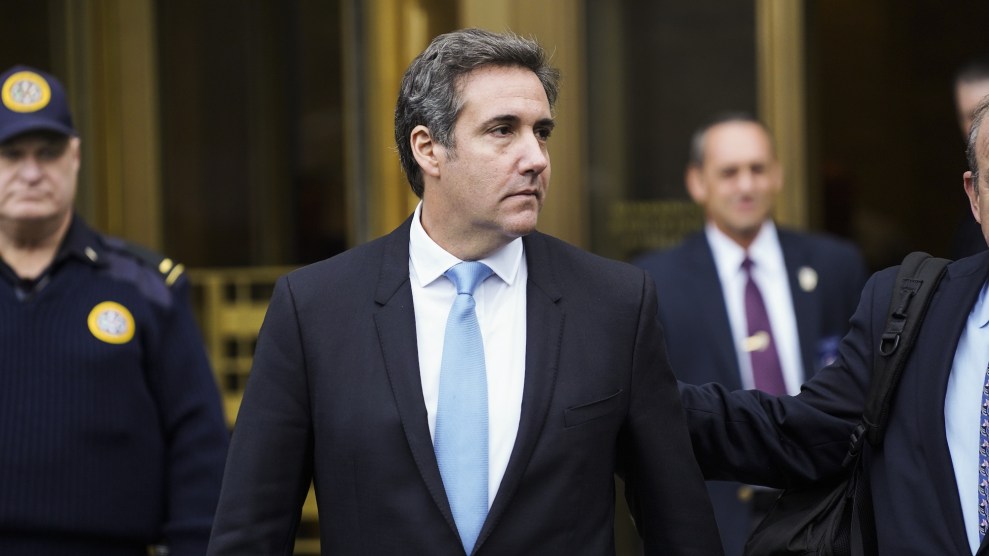 At a meeting in Miami on April 5, Franklin Haney, the owner of an inoperative nuclear power plant in Hollywood, Alabama, sought a major investment for his facility, according to two sources familiar with the gathering. His target, the sources say, was Sheikh Ahmed bin Jassim bin Mohammed Al Thani, Qatar’s minister of economy and commerce and deputy chairman of the Qatar Investment Authority, the $300 billion sovereign wealth fund of the natural-gas-rich Persian Gulf state. Also at the meeting, according to the sources, was Michael Cohen, President Donald Trump’s longtime personal lawyer and fixer. (Several days later, Cohen’s office and home would be raided by federal agents.) Now, as the Trump scandal expands to include Cohen’s business deals and possible interactions between Trump associates and officials of Saudi Arabia and the United Arab Emirates, any relationship between Cohen and Qatar would likely be of interest to federal investigators.

“Michael doesn’t do anything without getting paid.”

Last week, Foreign Policy reported that Cohen met with Al Thani in Florida that same week on the sidelines of the Qatar-US Economic Forum, but the publication noted that its sources would not say what they discussed. A Qatari embassy spokesman told Foreign Policy that Cohen requested the meeting with Al Thani but would not say if it took place. “The State of Qatar has never been a client of Mr. Cohen,” the spokesman said.

The two sources familiar with the discussions between Cohen and Al Thani tell Mother Jones that the two men met with Haney to discuss possible Qatari investment in his nuclear power plant. MarineTraffic.com, a website that tracks the location of large ships, shows that Haney’s $50 million, 167-foot yacht, the Emelina, was docked in Miami’s Miamarina from April 2 through April 7. (Haney’s yacht is usually based in Washington, DC.)

If a deal were struck, Cohen could have expected to receive a finder’s fee, according to the sources. “Michael doesn’t do anything without getting paid,” said one of the sources, who knows Cohen. It’s unclear whether any agreement was reached.

Cohen’s presence at the meeting would raise questions about his relationship with Qatar, a US ally that has been involved in a bitter diplomatic dispute with Saudi Arabia and the United Arab Emirates, a conflict that has played out among officials and lobbyists within Washington. Ahmed Al-Rumaihi, who formerly served as the head of the investments division at the Qatari sovereign fund (known as the QIA) and as a Qatari diplomat, recently told the Washington Post and the Intercept that in December 2016, Cohen demanded a fee of $1 million in exchange for connecting Al-Rumaihi with potential partners on US infrastructure projects. Al-Rumaihi, who left the QIA in March 2017, said he rejected Cohen’s request. Cohen told the Intercept it was “untrue” that he had sought payment from Al-Rumaihi. But Cohen, according to the sources who spoke with Mother Jones, still managed to make a connection with the QIA.

Haney, 77, a Chattanooga, Tennessee, native who made a fortune largely through leasing office space to federal agencies, bought the unfinished Bellefonte Nuclear Plant from the federal Tennessee Valley Authority for $111 million in 2016. Work on the plant started in 1975 but was halted in 1988 and never completed. Haney still needs to line up financing—an estimated $13 billion—to complete work on two nuclear reactors at the plant. Haney also needs Trump administration help. He is seeking an extension of an Energy Department loan guarantee, nuclear power tax credits, and various Nuclear Regulatory Commission approvals. And if the plant is eventually completed, Haney will need business from the TVA, the only viable customer for the plant’s electricity.

Haney has aggressively courted the Trump administration. After giving heavily to Democrats for years, he donated $1 million to Trump’s inaugural committee through one of his companies. He has also contributed at least $125,000 to the Republican National Committee this year, according to Federal Election Commission records. Bloomberg reported last year that Haney had bragged to associates that he has dined with Trump at least a dozen times since the election. Haney is also a member of Mar-a-Lago, Trump’s Florida club, according to the report.

Cohen’s attorney and Haney did not respond to requests for comment. A spokesman for the Qatari Investment Authority declined to comment.

Federal prosecutors in New York are investigating Cohen, an investigation which appears partly focused on Cohen’s efforts after Trump’s election to pitch his relationship with the president to individuals and companies seeking assistance from the new administration. Earlier this month, Michael Avenatti, a lawyer for Stormy Daniels, the porn star who says she had an affair with Trump, revealed a series of payments to Cohen, which were detailed in suspicious financial activity reports compiled by a bank Cohen used. AT&T; Swiss pharmaceutical company Novartis; and Columbus Nova, the US investment manager for Viktor Vekselberg, a Russian oligarch recently sanctioned by the Treasury Department, have all confirmed making payments to a Cohen firm called Essential Consultants. After news of these payments broke, several companies claimed that Cohen failed to deliver the assistance they sought.

Cohen’s meeting with Al Thani suggests he was seeking to capitalize on his connection to Trump as recently as last month. The Miami meeting came the week before an April 10 Oval Office meeting between Trump and the emir of Qatar, Sheikh Tamim bin Hamad Al Thani. In 2017, Trump supported a blockade imposed on Qatar by Saudi Arabia, the UAE, and others, and he accused Qatar of funding terrorist groups. During this White House meeting, in a sharp reversal, Trump praised the emir for cracking down on terror funding.