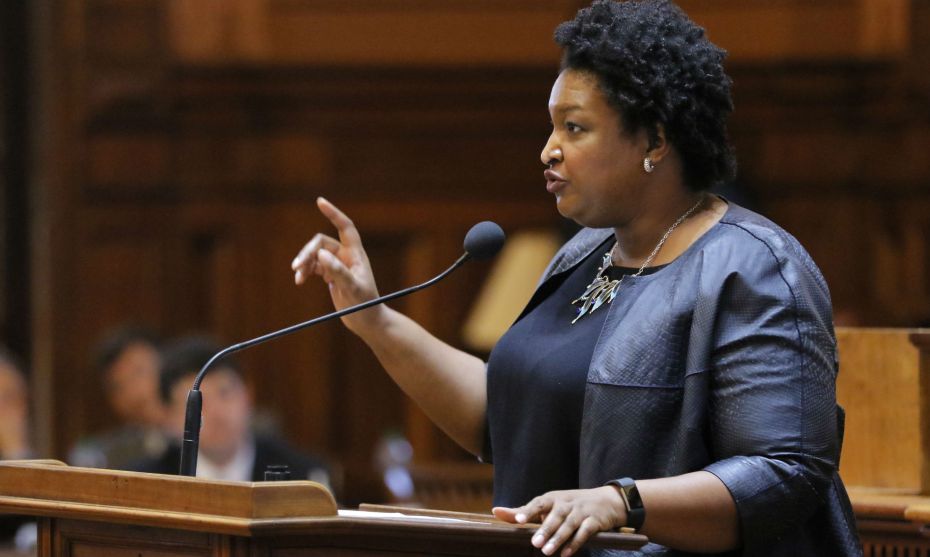 Stacey Abrams has worked hard to cultivate an image as a progressive stalwart in Georgia. That’s why it was so surprising last week when claims surfaced that the gubernatorial candidate, who is running to be the first black female governor in the country, had effectively endorsed a racially gerrymandered electoral map during her time as the minority leader in the Georgia House.

The claims, from several state Republicans, are part of an attempt to discredit a lawsuit brought by former Attorney General Eric Holder and the NAACP that challenges the Georgia GOP’s 2016 redistricting effort. But making matters worse for Abrams, several Democratic supporters, including some of Abrams’ primary opponent, Stacey Evans, also allege in a recent Intercept story that Abrams signed off on the controversial map and even pushed the caucus to vote for it.

The Democratic primary is just one month out and this—a black politician supposedly squashing black votes—isn’t a good look. The lawmaker, who I recently profiled, is locked in a heated primary with Evans that’s gotten lots of national attention, not to mention money. Much of the interest has been focused Abrams’ power in personal storytelling—from her humble beginnings in Mississippi to becoming the first female minority leader of either party—and her vision for a state that uses the weight of its infrastructure to help its most vulnerable residents prosper.

Her campaign is relying on a strategy that includes a massive voter registration effort targeted at the state’s fast-growing communities of color. And the candidate often boasts of having a long record of supporting and expanding voting rights, a particularly crucial selling point since several states’ electoral maps have come under scrutiny recently, as my colleagues have repeatedly reported.

The heart of Abrams’ past efforts on voting rights is the New Georgia Project, a nonprofit she founded in 2013 that’s aimed at registering hundreds of thousands of voters of color across the state. Abrams is also wagering her political future on registering new voters of color instead of trying only to convert moderate white ones. “We spend millions of dollars trying to convince Republican women in the suburbs that they really are Democrats, that they’re just confused,” Abrams said during a candidate forum in February, according to the Atlanta Journal-Constitution. “That has not worked,” she said, referring to Democratic politicians like Michelle Nunn and Jason Carter, who ran unsuccessfully for the US Senate and governorship. “Not once.”

Her registration efforts through the New Georgia Project, though, have gotten a fair share of criticism. Some state Democrats have argued that the group hasn’t been transparent about its finances and hasn’t registered enough voters to justify the millions of dollars in private donations it has received. In response, the New Georgia Project sued the state in 2014, asking for oversight of the election that year. (They lost.) The drama continued from there, with at least one investigation into the group for voter fraud, though it came up empty.

That sets the backdrop for the current legal fight. The lawsuit from Holder and the NAACP alleges that Republicans in Georgia manipulated the lines of two of the state’s legislative districts to cut down the numbers of black voters in them. As part of that lawsuit, in late March, Georgia’s Republican Secretary of State, Brian Kemp, filed a brief including testimony from several Republican lawmakers saying that it was either their understanding that Abrams approved of the gerrymandered map, or, at least, that she didn’t seem to object to it. It should be noted that in key testimony from Andy Nix, chairman of the House Reapportionment Committee, and from Brian Strickland, a member of the House, both say that someone else had told them this was Abrams’ position; Strickland says he doesn’t “remember if [he] had discussed that directly with her.”

Of course, if Abrams did in fact approve the map, that makes things quite a bit more tricky for Holder and the NAACP.

Beyond picking up the Republican testimony, the Intercept further complicated things for Abrams. In an interview with LaDawn Jones, a Democratic former member of the House who has become a vocal critic of Abrams, says that Abrams created a hostile environment for her colleagues, in which few questions were allowed. In a follow-up email to Mother Jones, Jones, a supporter of Stacey Evans in the primary says, “The climate in the Democrat Caucus under Leader Abrams was not collaboration among the elected leaders representing a variety of Georgia cities. There were directives to simply ‘follow the Leader.'”

She adds, “The most concerning part is that these decisions were not made out of the need to compromise or make ‘bad bills less bad’ as the Leader has claimed. These decisions were made because they benefited Leader Abram’s path to the Governor’s office and later the White House.”

But the Abrams campaign steadfastly denies that she ever consented to final changes on the gerrymandered maps. Her explanation, according to an Atlanta Journal-Constitution report yesterday, is that she was mislead:

“Abrams said Tuesday that the chairman of the House Reapportionment Committee had assured her that the primary purpose of HB 566 was to make small adjustments in the House district of Speaker pro tem Jan Jones, R-Milton, which abutted only other Republican districts. And to accommodate a swap of Atlanta voters between state Reps. Margaret Kaiser and Keisha Waites, both Democrats—which gave the bill a bipartisan cast.”

She then claims that “several seats were added afterwards,” and 17 total house districts were actually affected. (The lawsuit focuses on two districts, neither of which were the two she claims she thought would be adjusted.)

While such a scenario still doesn’t look great for Abrams, it’s quite different from what the others allege.

In a statement for Mother Jones, Abrams goes even further to defend her record: “As House Democratic Leader, I told my own members that I would mount primary challenges against them if they voted for gerrymandered maps. I think that my work to partner with the Democratic Legislative Campaign Committee, National Democratic Redistricting Committee, and to put six seats drawn for Republicans in Democratic hands speaks for itself.”

Carolyn Hugley, the Democratic whip in the Georgia House, also vouched for Abrams. “This is a sad and inaccurate recollection of the events that occurred,” Hugley said in a statement to Mother Jones. “Once the effect of the changes were known, to combat Republican gerrymandering effects, [Abrams] enlisted allies in the legislature and redistricting and legal communities to fight the changes.”

Democratic Representative Al Williams echoed Hugley’s sentiments: “I don’t know if our former colleagues are suffering from amnesia or just being malicious, but they know it’s not the truth. I think the Trump-itis has invaded them too. It’s going around these days.”

And with that, there are still roughly three weeks until the primary and a whole trial to look forward to.

Correction: This piece has been updated to clarify that LaDawn Jones only spoke to Mother Jones about the environment created by Abrams, not her direct involvement in the redistricting bill.