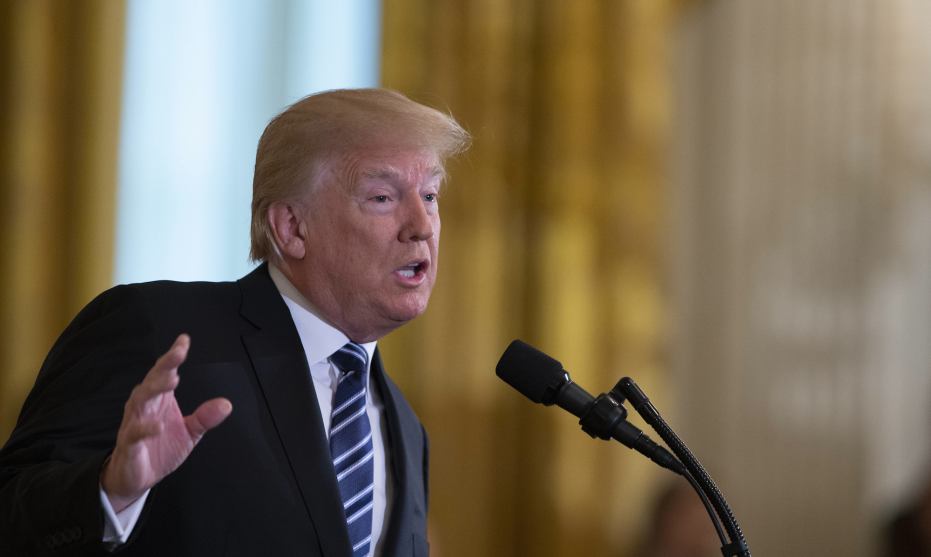 President Donald Trump drew fierce condemnation last week for his remarks vilifying undocumented immigrants as “animals.” Many decried the comment as dehumanizing and racist, even if it was made specifically in reference to members of the violent gang MS-13, as the president quickly claimed.

The White House is now fully embracing Trump’s remarks, releasing a statement Monday that doubles down on the “animals” description. The statement uses the word “animal” 10 times:

WHAT: The violent animals of MS-13 have committed heinous, violent attacks in communities across America.

Too many innocent Americans have fallen victim to the unthinkable violence of MS-13’s animals.

At the State of the Union in January 2018, President Trump brought as his guests Elizabeth Alvarado, Robert Mickens, Evelyn Rodriguez, and Freddy Cuevas, the parents of Nisa Mickens and Kayla Cuevas.  Police believe these young girls were chased down and brutally murdered by MS-13 gang members on Long Island, New York, in 2016. Suffolk County Police Commissioner stated that the “murders show a level of brutality that is close to unmatched.”

In Maryland, MS-13’s animals are accused of stabbing a man more than 100 times and then decapitating him, dismembering him, and ripping his heart out of his body. Police believe MS-13 members in Maryland also savagely beat a 15-year-old human trafficking victim. The MS-13 animals used a bat and took turns beating her nearly 30 times in total.

In Houston, Texas, two MS-13 members were charged after kidnapping and sexually assaulting one girl and murdering another. The two MS-13 animals laughed, smiled, and waved for cameras in court as they faced the charges.

New York communities have suffered tremendously from the abhorrent violence of MS-13. Nearly 40 percent of all murders in Suffolk County, New York between January 2016 and June 2017 were tied to MS-13.

In January 2017, MS-13 members were charged with killing and hacking up a teenager in Nassau County. MS-13’s animals reportedly saw the murder as a way to boost their standing in the gang. In April 2017, police believe four young men were brutally murdered by MS-13 animals on Long Island. One victim was a young man in town visiting family during an Easter week vacation. Just last month, in April 2018, MS-13 reportedly called for its members on Long Island to kill a cop for the sake of making a statement.

WHY: MS-13 is a transnational gang which follows the motto of “kill, rape, control” by committing shocking acts of violence in an attempt to instill fear and gain control.

MS-13 is a transnational gang that has brought violence, fear, and suffering to American communities. MS-13, short for Mara Salvatrucha, commits shocking acts of violence to instill fear, including machete attacks, executions, gang rape, human trafficking, and more. In their motto, the animals of MS-13 make clear their goal is to “kill, rape, control.” The gang has more than 10,000 members in the United States spreading violence and suffering.

Recent investigations have revealed MS-13 gang leaders based in El Salvador have been sending representatives into the United States illegally to connect the leaders with local gang members. These foreign-based gang leaders direct local members to become even more violent in an effort to control more territory.

Shortly after the immigration meeting on Wednesday where Trump initially made the “animals” remark, White House press secretary Sarah Huckabee Sanders defended the slur, adding that she believed it didn’t go “far enough.” Conservatives echoed Trump’s tweets accusing the media of intentionally twisting his words. David Bossie, Trump’s former deputy campaign manager, went one step further over the weekend, telling Fox News that the “animals” need to be “put down.” He added, “Let’s be honest, these people need to be dealt with and they need to be dealt with severely.”

Fake News Media had me calling Immigrants, or Illegal Immigrants, “Animals.” Wrong! They were begrudgingly forced to withdraw their stories. I referred to MS 13 Gang Members as “Animals,” a big difference – and so true. Fake News got it purposely wrong, as usual!

The White House statement comes ahead of a scheduled Wednesday event on Long Island, where last year Trump railed against MS-13 and encouraged law enforcement officials to use force on potential suspects.