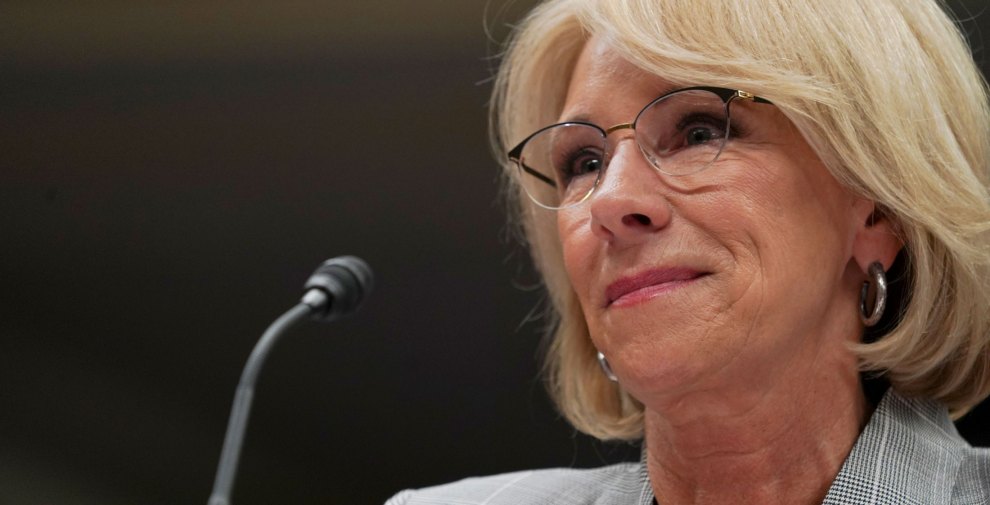 Education Secretary Betsy DeVos continued her streak of groan–inducing trips to Capitol Hill on Tuesday, telling lawmakers that the school safety commission she oversees would not look at the role of guns in school violence and reversing course on her previous statement that it was up to schools to decide if they wanted to report undocumented students to immigration enforcement.

DeVos appeared before a Senate committee to defend $3.6 billion in cuts to the 2019 budget. But from the get-go, Senate Democrats took every opportunity to press the education secretary on everything from guns in schools to immigration enforcement to the recent teacher strikes:

Sen. Patty Murray (D-Wash.) slammed DeVos for proposing budget cuts similar to the ones Congress rejected a year ago. The multibillion-dollar cuts included eliminating $25 million in funding for school safety programs, a $400 million grant program meant for districts to use on school climate and health efforts, and the School Emergency Response to Violence program. “This budget is another example of an empty promise made by this administration to address the senseless gun violence devastating our families and our schools and our communities around the country,” Murray told DeVos.

.@BetsyDeVosED is on the Hill again this morning, and @PattyMurray is the latest to slam the Secretary's work on school safety: "Your gun safety commission has yet to take any real action steps." pic.twitter.com/6uvJpABzLu

Sen. Patrick Leahy (D-Vt.) later pressed DeVos on whether the federal school safety commission she oversees will look at the role of guns in school violence. “That is not part of the commission’s charge, per se,” DeVos responded, adding, “We’re actually studying school safety and how we can ensure our students are safe in school.” (Just a week ago, a child asked White House press secretary Sarah Huckabee Sanders what the administration planned to do to protect kids like him from future school shootings; Sanders, choking up, told him that the commission would meet to discuss “how we can do every single thing within our power to protect kids in our schools.”)

Leahy wasn’t satisfied. “Do you believe an 18-year-old high school student should be able to walk into a store and minutes later walk out with an AR-15 rifle and hundreds of rounds of ammunition?” he asked.

“I believe that’s very much a matter for debate,” DeVos responded.

“So we’ll look at gun violence in schools, but not look at guns? An interesting concept,” Leahy said.

.@SenatorLeahy: "Will your commission look at the role of fire arms as it relates to gun violence in our schools?"@BetsyDeVosED: “That is not part of the commission’s charge, per sey.”

Sen. Leahy: "I see…So, you're studying gun violence but not considering the role of guns." pic.twitter.com/vKMnMaduuf

When the White House announced the commission’s creation following the Parkland shooting, a fact sheet stated that commission would examine, among other things, “age restrictions for certain firearms purchases.” Education Department spokeswoman Liz Hill said in a statement that the commission would “look at all issues the President asked the committee to study,” adding: “It’s important to note that the commission cannot create or amend current gun laws—that is the Congress’ job.” The commission, which has visited a Maryland school to explore positive behavioral intervention techniques, will host its first public forum on Wednesday.

During a House committee hearing in May, Rep. Adriano Espaillat (D-N.Y.) asked DeVos whether schools were responsible for reporting undocumented students to ICE. “I think that’s a school decision, it’s a local community decision,” DeVos responded, prompting sharp criticism from civil rights and immigration groups that noted students were protected from discrimination by school districts under Plyer v. Doe. A day after that hearing, DeVos stated she believed schools should abide by the Supreme Court’s decision, noting that “schools are not, and should never become, immigration enforcement zones.”

On Monday, more than 100 lawmakers requested that DeVos clarify her stance, warning that “left uncorrected, her testimony could do irreparable harm to educational opportunity for undocumented children.” Sen. Chris Murphy (D-Conn.) pressed DeVos on whether teachers or school administrators could report undocumented students to ICE. After some back and forth, DeVos said: “I don’t think they can.”

Exchange between Sen. @ChrisMurphyCT & Secretary Betsy DeVos on whether teachers should refer undocumented students to @ICEgov.

In April, as teacher strikes swept the country, DeVos maintained that teachers who were protesting cuts to school funding and subpar wages should “keep adult disagreements and disputes in a separate place.” Murray asked if the secretary thought students benefited from learning from outdated textbooks and being taught by teachers with second jobs. “When students are not able to go to school because they don’t have anyone to go to school to teach them, that hurts them,” DeVos said. “So I hope that adults will have their disagreements and debates outside of time that it impacts and affects students.”