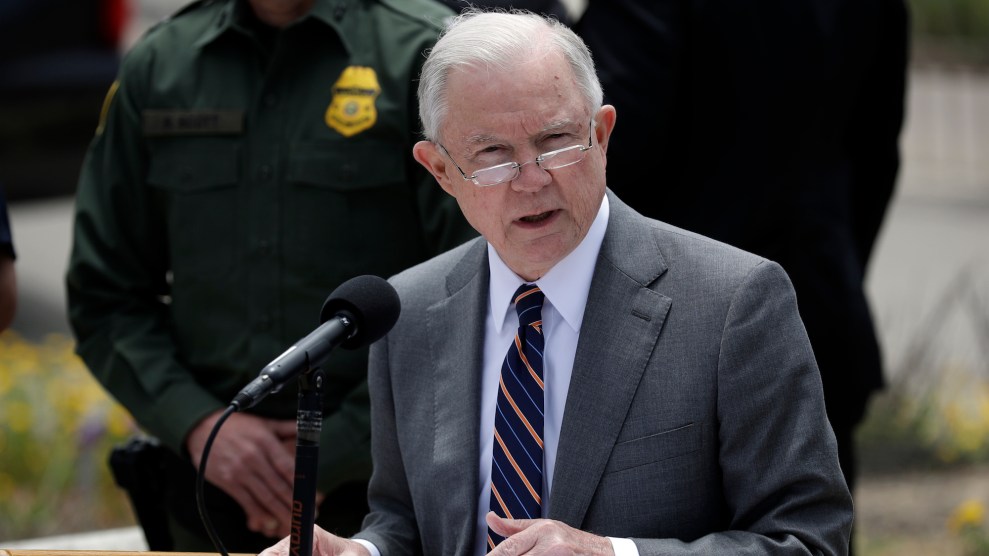 Attorney General Jeff Sessions speaks at a news conference near the border in San Diego, California, in May.Gregory Bull/AP

In May, Attorney General Jeff Sessions announced that the Justice Department would strive to prosecute everyone who crossed the US-Mexico border without authorization. The fact that the “zero tolerance” prosecutions led to splitting apart more than 2,000 families didn’t matter. “If you cross this border unlawfully, then we will prosecute you,” Sessions said as he stood along the border in San Diego. “It’s that simple.”

But it was never actually that simple. The Justice Department couldn’t prosecute all unauthorized migrants, and federal officials needed to choose who to target. Newly released government data shows that the Trump administration prosecuted thousands of parents instead of prosecuting adults traveling without children. Those zero-tolerance prosecutions caused the family separation crisis by placing parents in the custody of the Justice Department and turning their children into “unaccompanied” minors.

Less than one-third of migrants apprehended by Border Patrol agents were criminally prosecuted in May, according to a report released on Tuesday by the Transactional Access Records Access Clearinghouse, a nonpartisan research center at Syracuse University. Case-by-case records analyzed by TRAC show that 9,216 people were prosecuted along the southern border in May following referrals from Customs and Border Protection, a division of the Department of Homeland Security. More than 40,000 adults and children were apprehended by Border Patrol agents in May. After excluding children, who were not targeted for prosecution, TRAC found that “a generous estimate indicates criminal prosecutions were still at most only 32 percent of total Border Patrol apprehensions.”

Border Patrol agents apprehended more than 24,000 adults traveling without children who crossed the border in May, meaning that the Justice Department could have increased prosecutions for illegal entry without prosecuting any parents and separating families. “The so-called zero-tolerance policy didn’t as a practical matter eliminate prosecutorial discretion,” TRAC concluded. “Since less than one out of three adults were actually prosecuted, CBP personnel had to choose which individuals among those apprehended to refer to federal prosecutors.” The total number of prosecutions in May increased 11 by percent compared with April and 44 percent compared with March.

Sessions announced the zero-tolerance policy in April, telling federal prosecutors along the border that they should take up all DHS referrals for illegal entry into the United States. One month later, Sessions unveiled a new initiative under which DHS would refer all illegal entry cases for prosecution. “And the Department of Justice will take up as many of those cases as humanly possible until we get to 100 percent,” Sessions said.

The Trump administration has not explained how it chose whom to prosecute beyond saying that no one would be exempt under the zero-tolerance initiative and that everyone would be subject to potential prosecution. The obvious explanation for prosecuting parents was that Sessions and the Trump administration wanted to deter families from crossing the border without authorization. Yet at a June White House press briefing two days before Trump rescinded his family separation policy, a reporter asked Homeland Security Secretary Kirstjen Nielsen if the Trump administration was intentionally separating families. “I find that offensive,” Nielsen replied. “No. Because why would I ever create a policy that purposely does that?”

“Perhaps a deterrent?” the reporter followed up. “No,” she said with visible exasperation.

Sessions was more candid in an interview with Fox News that aired later that night. Not prosecuting parents had driven more families to cross the border illegally, he told Laura Ingraham. “So yes,” Sessions continued, “hopefully people will get the message and come through the border at the port of entry and not break across the border unlawfully.”