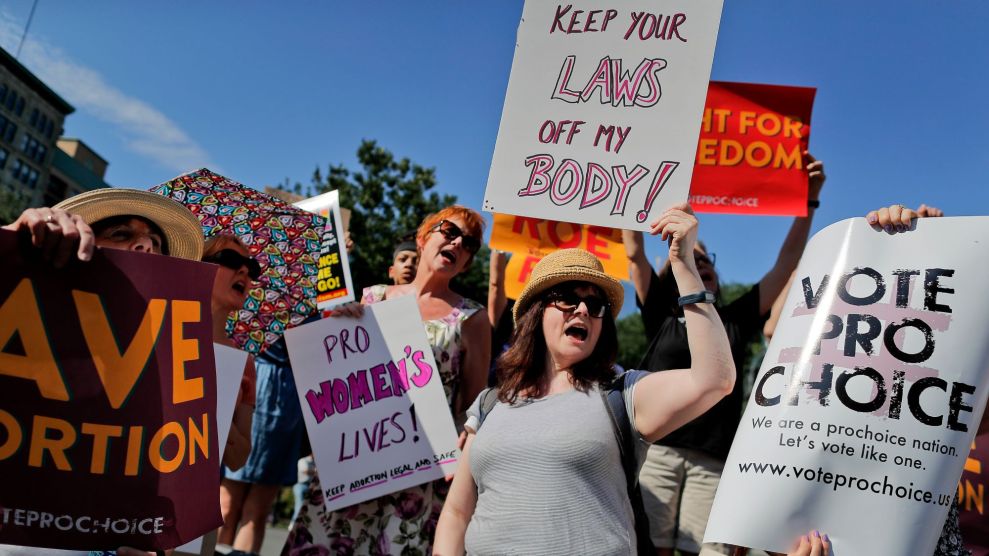 Until last week, Massachusetts was one of a handful of states that still had abortion bans on the books from the years before Roe v. Wade made the procedure legal nationwide. But on Friday, Republican Governor Charlie Baker signed a bill repealing the state’s 173-year-old ban on “procuring a miscarriage,” officially putting an end to an anti-abortion law that had long been unenforceable thanks to the Supreme Court’s landmark decision in 1973.

The move makes Massachusetts the first state to repeal outdated laws criminalizing abortion since the retirement of Supreme Court Justice Anthony Kennedy and the nomination of Brett Kavanaugh, whose confirmation would tip the balance of the Supreme Court toward an anti-abortion majority. But Massachusetts might not be the last: As the possibility that the right to abortion will be left up to states becomes more of a reality, Democrats and abortion-rights advocates are renewing efforts to repeal pre-Roe abortion bans.

The specifics of these outdated laws vary by state. Nine states still have laws, passed before 1973, that ban abortion outright, according to the Guttmacher Institute, a think tank that studies reproductive rights. Other states, like New York, have laws that don’t ban the procedure entirely but instead make it illegal for women to self-induce. Still others, like Rhode Island, passed abortion bans just after the Supreme Court decision, which were subsequently found unconstitutional but left in the state statute book.

Predictably, the majority of states that have kept these outdated laws on the books are conservative and unlikely to see pro-choice legislation pass any time soon. But in New Mexico and Rhode Island, pro-choice lawmakers are hoping they’ll have the votes to repeal abortion bans in legislative sessions beginning early next year. Meanwhile, Democrats in Wisconsin and Michigan are making their laws an issue in upcoming governor’s races. And in New York, activists are pressuring the state legislature to repeal laws that criminalize self-induced abortion and abortions after 24 weeks.

For decades, states like Massachusetts have ignored the old laws because, when the right to abortion became the law of the land in 1973, they were regarded as unenforceable and effectively void. Reproductive rights groups had been pushing to repeal Massachusetts’ law for years, but previous attempts didn’t make it far in the state legislature, since the possibility of Roe being overturned seemed remote. But the election of President Donald Trump, who has promised to do away with Roe and said that women should be punished for their abortions, has made these laws impossible to ignore.

That’s because if Roe is overturned, the right to abortion could be decided on a state level, and states would be free to bring back old abortion bans or pass new ones. As a result, activists are much more concerned about these old statutes than they were when Kennedy was on the court. In Michigan, for instance, Republican candidates for governor have already suggested they’d enforce the pre-Roe law if they could. Even in solidly blue states, advocates worry that a move by the Supreme Court to limit abortion rights could give legitimacy to prosecutors who want to enforce these archaic laws.

“If Roe is overturned or undercut, states have a lot of leeway in adopting restrictions or even bans,” says Elizabeth Nash, senior state issues manager at the Guttmacher Institute. “What’s on the books now could be revived and enforced.”

Nash points out that if the right to abortion is tossed back to the states, it’s not clear in every case how exactly the old abortion bans can be used. Even if Roe is completely overturned, says Nash, old bans wouldn’t necessarily go into effect automatically. That’s because many states passed additional abortion restrictions in the aftermath of Roe, and they would have to figure out how the old abortion bans should be interpreted in light of these more recent laws. And in many states, courts have already said the old anti-abortion bans can’t be enforced, so litigation over the old statutes would be likely if states choose to enforce them.

To enforce an old abortion ban, a state attorney general could issue an opinion explaining how the law should be interpreted. Or state legislatures could just opt to pass a new law banning abortion, to avoid dealing with legal controversies over the old statutes. One state with a pre-Roe ban, Mississippi, has a “trigger law” on the books that ensures abortion would automatically be illegal after the attorney general certifies that Roe has been overturned. (Three other states—Louisiana, North Dakota, and South Dakota—also have trigger laws that would ban abortion should Roe be overturned.)

Repealing archaic abortion bans is meant to avoid this uncertainty altogether. But so far, pro-choice lawmakers have had mixed success. Last year, Delaware finally repealed its abortion ban, becoming the first state to do so in the wake of Trump’s election. But in New Mexico, a similar bill introduced this year failed after the liberal-leaning state’s Republican governor, who in even-numbered years can decide which bills get heard, punted on it.

Lawmakers in Rhode Island, New York, and even West Virginia also introduced bills to get rid of archaic abortion laws earlier this year, though they weren’t successful. Following Kennedy’s retirement, governors of the first two states urged legislators to repeal the laws when they reconvene. (Passing such a bill is much more of a long shot in West Virginia, where the legislature has voted to put an anti-abortion constitutional amendment on the fall ballot.)

Pro-choice legislators face an uphill battle, even in liberal states: New York’s state legislature is divided on the issue, and as my colleague Dan Spinelli has reported, Rhode Island has found it surprisingly difficult to pass laws protecting abortion rights. Still, the recent Supreme Court changes are firing up activists who are determined to get these bills passed.

“Massachusetts was the first one that was spurred by the Kennedy annoucement,” says Agata Pelka, state legislative counsel at the Center for Reproductive Rights. “We hope that it will lead the great efforts that are already underway.”