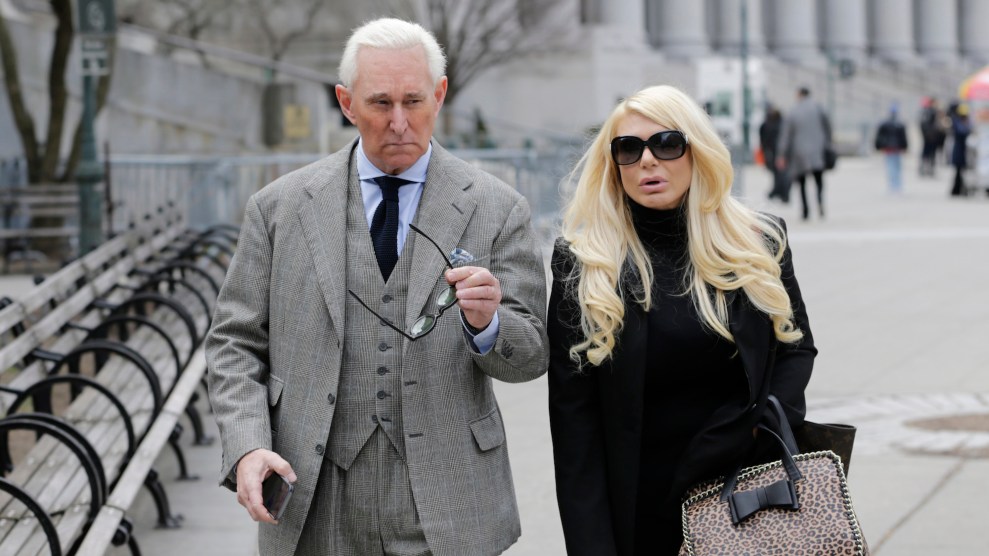 Why did a super-PAC run by longtime Trump adviser Roger Stone pay nearly $5,000 to the mother of Kristin Davis, the so-called “Manhattan Madam,” in July 2016? This may be a question that special counsel Robert Mueller seeks to answer as he zeroes in on Stone in his ongoing investigation of possible coordination between Trump allies and Russia.

One of the more colorful characters to enter the Trump-Russia scandal, Davis once ran a high-priced prostitution ring and currently splits a two-floor Harlem apartment with Stone, who is the godfather of her son. Last week, Davis appeared before a Washington, DC, grand jury convened by Mueller to answer questions about Stone that she says focused on “whether or not any collusion happened with Russia.”

Over the years, Stone has employed Davis to do web design, schedule his travel, and perform other administrative tasks, but he claims she did not work for him in 2016 and would therefore have no knowledge of any of the subjects Mueller is probing. “She knows of no Russian collusion or WikiLeaks collaboration or any other illegal activity on my part in connection with the presidential election or otherwise,” Stone said in a CNN interview last week. “In the time period that’s most under focus, 2015 and 2016, she was not working for me. She came back to work for me in January of ’17, although I think I paid her in December of 2016.”

One former Stone employee has sought immunity to discuss transactions made by Stone’s super-PAC and another political group linked to the Republican operative.

Mueller appears to be intensifying his focus on Stone, and prosecutors have questioned or contacted at least eight of his associates, including Davis. Stone has said he is “probably” the person described in Mueller’s July 13 indictment of 12 Russian intelligence agents as an American who communicated with Russian hackers about emails they allegedly stole from Democrats. Stone has acknowledged exchanging messages with “Guccifer 2.0,” who prosecutors say was a front for Russian military intelligence. He asserts that he did not believe his interlocutor was Russian, and has disputed allegations that Guccifer 2.0 was a persona used by Russian agents.

Court records suggest prosecutors are also investigating the 2016 activities of Stone’s super-PAC, the Committee to Restore America’s Greatness. They have interviewed several people connected to the organization. One former Stone employee paid by the super-PAC, Andrew Miller, has sought immunity to discuss the finances of that committee and another political organization linked to Stone. Among the other individuals paid by the super-PAC—which raised hundreds of thousands of dollars and spent just a fraction of that haul in support of Trump’s candidacy—was Cheryl Smith of Oroville, California, who public records indicate is Kristin Davis’ mother. According to Federal Election Commission filings, the group paid Smith $4,900 on July 11, 2016, for “consulting.”

It is unclear what type of consulting work Smith, who has no apparent political experience, would have performed. Smith, Kristin Davis, the committee’s treasurer, and Stone’s lawyers did not respond to questions. In a text message, Stone said he was too busy to “answer stupid questions like this.” He did not respond to further questions.

Failure to accurately report the purpose of a super-PAC payment would violate reporting requirements of the Federal Election Campaign Act and potentially other laws. “If it was a pass-through payment, that would be illegal reporting of a campaign expenditure,” says Larry Noble, a former general counsel of the FEC.

Stone is personally close to Davis’ family. He says he met Davis in 2008 after she gained notoriety for running an escort service whose clients she claimed included Eliot Spitzer, who was New York governor at the time. Spitzer denied the claim. Stone subsequently managed a 2010 New York gubernatorial bid by Davis, whose platform advocated legalizing prostitution.

In 2016, Davis moved into an apartment on Manhattan’s Upper East Side leased by Stone, who splits his time between New York and Florida, according to a recent Washington Post report. Davis was then pregnant with a son she has said was fathered by a man she met after completing an 18-month prison sentence for drug distribution. Davis told the Post that after Stone asked her to name the child after him, she gave him the middle name “Stone.” Stone and his wife also became the child’s godparents. Davis and her son currently live with Stone in Harlem.

On July 28, Stone posted a picture of Davis and her son on Instagram, writing: “Why do FBI agents dispatched by Robert Mueller keep asking my friends if I am the father of this baby and what does that have to do with Russian collusion in the 2016 election[?]”

Stone says Davis worked for him in 2017. It appears she was compensated by another group linked to Stone. Stop the Steal, a tax-exempt nonprofit initially set up to in 2016 to assist President Donald Trump in an anticipated fight over delegates at the Republican National Convention, paid Davis $3,500 on December 27, 2016, and another $3,500 on February 8, 2017, for “fundraising expenses,” according to IRS filings by the group. The filings show that the group stopped raising money after the 2016 election.

Miller, another former Stone employee, was paid $5,000 on October 13, 2016, by Stop the Steal for consulting. He also received $9,000 from Stone’s super-PAC, including payments of $2,000 and $3,000 identified as “expense reimbursement.” Last week, a federal judge held Miller in contempt of court for refusing to appear before the grand jury to answer questions. At a June 18 hearing related to Miller’s subpoena, Miller’s lawyer, Alicia Dearn, told US District Judge Beryl Howell that Miller wanted to “be granted immunity” to answer “questions about finances and transactions” for “political action committees” that Miller worked on for Stone. “We’re concerned that there may be some financial issues with those transactions,” Dearn said. She said Miller would assert his Fifth Amendment right to refuse to answer questions if he did not receive immunity to discuss his work for Stone’s political committees.

Stone posted a picture of Davis and her son on Instagram, writing: “Why do FBI agents dispatched by Robert Mueller keep asking my friends if I am the father of this baby and what does that have to do with Russian collusion in the 2016 election[?]”

Payments by Stop the Steal to Davis and Miller, Stone’s onetime employees, are notable. In November 2016, Stone filed sworn declarations with federal courts in Nevada and Pennsylvania stating that he did not control the group or its finances. He made that claim after Democrats in those states sued Stop the Steal and Stone due to allegations that the group intended to try to intimidate Democratic voters. “I did not establish Stop the Steal,” he said. “I do not control its bank account or in any other way manage its affairs.” (Stop the Steal is no longer active, but its website, StoptheSteal.org, redirects to Stone’s personal site.)

In the same filings, a California personal injury lawyer, Paul Jensen, said he had established Stop the Steal. Jensen is a longtime Stone associate. In 2007, describing himself as Stone’s lawyer, Jensen released a letter addressed to the FBI in which Stone made a much-cited but never verified claim that he had learned from “a social contact in an adult-themed club” that Spitzer wore knee-length black socks during trysts with prostitutes. The FBI never actually received the letter, the Atlantic reported.

The Committee to Restore America’s Greatness ultimately reported raising $587,000 in the 2016 cycle, but the group spent just $16,000 on independent political expenditures, buying two pro-Trump billboards. The super-PAC, however, paid more than $100,000 to Jensen’s law firm, which specializes in personal injury cases, for unspecified “legal and accounting” and “consulting” services. Jensen declined to respond to questions. More than $130,000 went to Citroen Associates for “voter fraud research and documentation” and “research services consulting.” Florida records indicate that Citroen’s president is John Kakanis, a former driver and social media aide for Stone. Mueller has called Kakanis before the grand jury.

The Committee to Restore America’s Greatness also paid $12,000 to a public relations firm, Drake Ventures, that is run by Stone and was registered by his wife. Stone had previously claimed he would not be paid by the committee. Citroen and Drake Ventures share a mailing address in Fort Lauderdale, Florida, with Stone Cold Truth Inc., another Stone business. According to the super-PAC’s FEC filings, the payment to Stone’s PR firm was for “consulting.”

As Mueller investigates possible coordination between the Trump campaign and Russia, he has charged Trump associates with crimes that prosecutors have uncovered in the course of their inquiry, including illegal lobbying, lying to FBI agents, and bank fraud. The special counsel’s apparent scrutiny of political groups linked to Stone suggests that, in addition to Russian collusion, his office may be sniffing around for evidence of potential campaign finance violations by the self-styled “king of dirty tricks.”