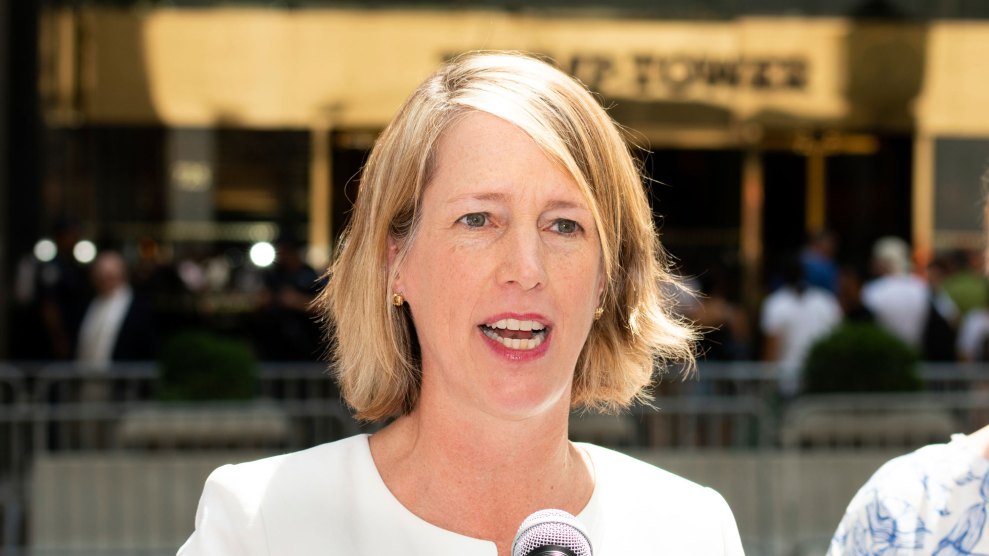 Zephyr Teachout was ending her quest for the Democratic nomination for attorney general of New York exactly where she’d started it. At 11 a.m. on the final day of before the election, after a morning spent lobbying for votes among Upper West Side commuters, the 46-year-old Fordham Law professor returned to the spot where she kicked off her campaign three months ago: the corner of 56th Street and Fifth Avenue in Manhattan—directly across the street from Trump Tower.

The president’s properties have been a favorite target of Democratic candidates and protesters during the first two years of the Trump era. But for Teachout, Trump Tower is not just a set piece; it is an action item. As tourists posed for selfies in front of the gold facade behind her, Teachout, the author of a history of public corruption, reiterated a promise she made in July—that on her first day in office, she intends to file a lawsuit alleging that the president has violated the Constitution by accepting payment from representatives of foreign governments for the use of his landmark properties. And she’d investigate his businesses and associates, too.

“We are going to use every tool available,” she told a small gaggle of reporters, “because Donald Trump is an ongoing daily threat to the fabric of our democracy.”

Teachout is locked in a tight three-way race to replace disgraced ex-attorney general Eric Schneiderman, who resigned in July amid allegations of sexual abuse by several women. After flirting with frontrunner status for a few weeks, she narrowly trailed both New York City Public Advocate Tish James and Democratic Rep. Sean Patrick Maloney in the final poll of the race. (The interim attorney general, Barbara Underwood, is not running.) With Gov. Andrew Cuomo looking like a safe bet for reelection, Teachout’s race is the last major intra-party contest of the cycle—and its outcome could have reverberations far beyond Albany.

In some ways, Teachout is looking to finish what she started four years ago. Her underdog campaign for governor against Cuomo in 2014—fueled by progressive anger over a shuttered corruption investigation—made her the standard bearer of a progressive insurgency that has swept the state this year and has already toppled the fourth-ranking Democrat in the House, Rep. Joe Crowley. New York’s politics “are like C-minus at best,” she says, and she pins the blame on an “old boys network” of politicians and donors.

“We are going to use every tool available, because Donald Trump is an ongoing daily threat to the fabric of our democracy.”

But Trump has also given her anti-corruption message new heft, which she hopes will help broaden her appeal beyond the party’s left wing, four years and many Albany indictments after she first ran. In 2016, it was Teachout who first floated the novel constitutional theory that Trump’s hotels violated the founding document’s ban on “emoluments”—that is, payments or financial benefits—from foreign governments. The emoluments clause is now the subject of joint litigation by Maryland and Washington, DC; Teachout was an adviser on that case.

Outside Trump Tower, a reporter asked if the president should fear her: “Yes.”

Democratic attorneys general have taken on a heightened importance in the age of Trump, as officials from Hawaii to Massachusetts have battled the administration in court over everything from the travel ban to the Affordable Care Act. But the New York job is different, because the winner has jurisdiction over the capitals of both American finance and of political corruption—and Trump’s business empire. An attorney general can cause a lot more trouble there than almost anywhere else. Before his downfall, Schneiderman had sued Trump over his now-defunct Trump University. (Shortly after the 2016 election, Trump settled with the state and former students for $25 million.) Underwood, Schneiderman’s successor, recently filed a civil suit against the Trump Foundation for violating state and federal laws governing charitable organizations. Teachout praised the lawsuit but argued that Cuomo needed to authorize the attorney general to launch a criminal investigation, too. Not long after, the governor signaled he would do just that.

Midtown pedestrians hurried past as Teachout recorded a short Facebook Live segment for her supporters. She rattled off her endorsements—including the New York Times—and the topline promises of her campaign: to investigate Trump and “finally clean up the corruption in Albany.” A few pedestrian shouted their support as Teachout, who is eight months pregnant, delivered her closing pitch.

Teachout has moved back and forth between the worlds of electoral politics and progressive policy shops since 2004, when she took a job on Howard Dean’s presidential campaign. Following the Dean campaign, she worked on campaign finance as director of the Sunlight Foundation, and she later a wrote a book about political corruption as a professor at Fordham Law School. The specifics of the Russia investigation may be new to her, but the issues behind it aren’t. When reporters linked Oleg Deripaska to Trump campaign chairman Paul Manafort, Teachout didn’t need to Google the Russian oligarch—she’d investigated Deripaska years ago in connection with alleged influence-peddling in Bosnia.

When Teachout ran in 2014, Cuomo refused to acknowledge her existence—he famously turned his back on her outstretched hand at a parade in New York City—but she pulled in nearly 35 percent of the vote against a governor who harbored presidential ambitions, carrying 32 upstate counties. In 2016, after supporting Vermont Sen. Bernie Sanders’ presidential campaign, she lost a close race for Congress in a Hudson Valley swing district.

Outside Trump Tower, a reporter asked Teachout if the president should fear her: “Yes,” she replied.

Democratic insurgent candidates this year have mostly focused on legislative and gubernatorial races, where the path to change is fairly straightforward: draft a bill, pass a bill, sign a bill. Teachout sees the AG’s office as another means of achieving the agenda the Democrats have been slow to push or adopt in Washington. In addition to corruption and campaign finance, she wants to use the  powers of the office to do something others in the job haven’t—break up big corporations. A driving force behind the party’s anti-monopoly push, she promised during the campaign to lead an anti-trust investigation into Google and Facebook.

“If Sprint-T-Mobile is approved by the federal government, the AG can sue to stop it under the Clayton Act in New York—isn’t that amazing?” she told me in an interview this summer. “So the attorneys general, under old federal anti-trust statutes, have the power to enforce those statutes and to intervene in mergers. It’s an unused power with one exception: California last year. But it’s an extraordinary one.” (Earlier this year, California attorney general Xavier Becerra filed an anti-trust lawsuit against health care conglomerate Sutter Health.)

Teachout’s anti-corporate populism hasn’t gone unnoticed by the people she hopes to target. New York real-estate developers, wary of Teachout’s promise to investigate them—”We have really abusive landlords that are often deeply connected to power in New York State,” she says—have backed Maloney to the tune of more than $300,000. In the closing days of the race, one developer alone spent $100,000 on ads attacking Teachout.

Four years after her first run for office, the progressive insurgency is a lot less lonely than it once was. Across the city on Wednesday, progressive state senate candidates were making their final push for votes using the same anti-Albany message that Teachout laid out in her first race. A few hours after her Facebook Live, Teachout was due in Long Island City, where she would reunite with Alexandria Ocasio-Cortez, the Democratic socialist from the Bronx whose campaign for Congress Teachout had endorsed—with little fanfare at the time—last spring. Then, she’d talk trust-busting with an assemblyman in Flushing, hop on the subway again to meet commuters in Sunnyside, and finally, return to Manhattan for an election-eve rally with Cuomo’s challenger, Cynthia Nixon.

But there were a few more voters to meet outside Trump Tower first. When she wrapped up, Teachout and a small entourage headed north toward the N train. A middle-aged man in a long raincoat and slim-fitting jeans stopped her on the street to wish her luck—it was the actor Noah Emmerich, star of The Americans, the hit TV show about a law enforcement officer hunting Russian operatives on American soil.