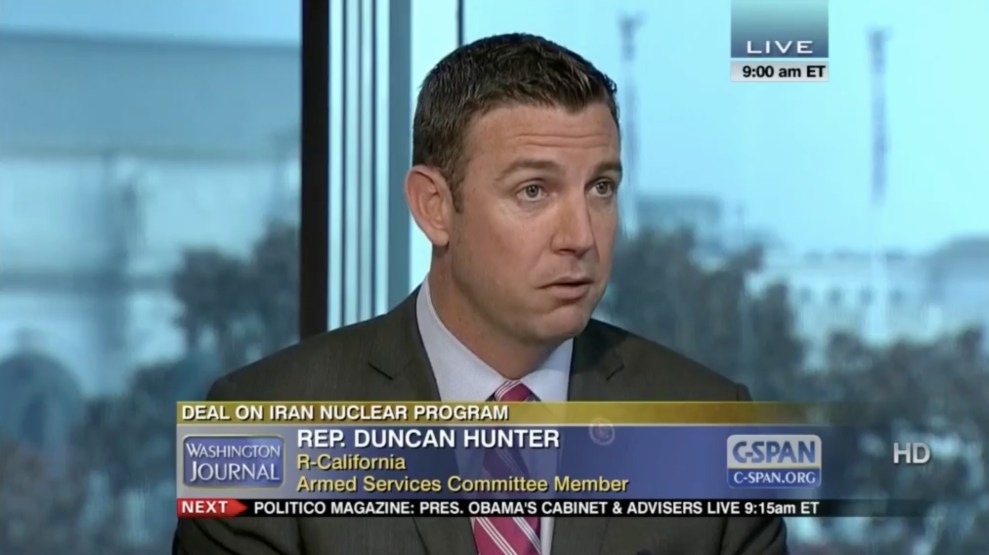 Rep. Duncan Hunter, the Southern California Republican facing a rocky reelection battle after being indicted for misusing campaign funds, has upped his Islamophobic dog-whistling in recent weeks in an effort to discredit his opponent, Ammar Campa-Najjar. In a letter distributed to San Diego voters by the Hunter campaign this week, three retired Marine Corps officers wrote that Campa Najjar’s Middle Eastern heritage and relation to a Palestinian terrorist make him a national security risk. A Hunter campaign ad even falsely said the Democrat was backed by the Muslim Brotherhood—Campa-Najjar is a Christian—and suggested he’s lied about his background in order to infiltrate Congress.

But Hunter has a history of making wild claims about Islam and the Middle East. In 2013, during an interview on C-SPAN about the Iran deal, which President Obama was working on at the time, Hunter said lying is a “part of Middle Eastern culture.”

After discussing with host Greta Brawner whether war in Iran is inevitable, Hunter got a question from a caller asking if Iranian negotiators were influenced by their religion. That prompted Hunter to expound on the qualities of people in the Middle East.

“In the Middle Eastern culture, it is looked upon with very high regard to get the best deal possible, no matter what it takes, and that includes lying,” Hunter told Brawner. “That’s one reason why these Gulf states like to work with the United States, because we’re honest and transparent and we have laws we have to live by…They like doing business with us, as opposed to their partners or even the communist Chinese…If you’re willing to blow yourself up and commit suicide in order to blow up other people, you are not a rational person. And that’s who you are dealing with when you’re dealing with the Iranians.”

Somewhat incredulously, Brawner asks, “Are you saying all Middle Eastern countries are this way? Willing to lie in negotiations?”

Hunter doubles down on his claims, trying to equate lying with bartering while shopping. He later backtracks, saying he wouldn’t “necessarily” say lying is a common practice among all Middle Eastern countries. “That’s a big generalization,” he says, before adding “they like to do whatever they can and say whatever they can to get the best deal. Yeah, absolutely.”

Hunter digs in further, calling then-president of Afghanistan Hamid Karzai “a little crazy,” “not trustworthy,” and “deceptive.” And, he says, dishonesty is more common in “backwards” Middle Eastern countries than anywhere else.

In December 2013, shortly after the interview aired, a Hunter spokesman told HuffPost that Hunter’s comments were only referring to Middle Eastern leadership, not Middle Eastern people overall.

A spokesman for Campa-Najjar said in a statement Thursday that Hunter’s “hate and fear knows no bounds…He continually associates people of Middle Eastern descent as ‘infiltrating’ our government, schools and culture.”

Hunter, whom the federal government has accused of using $250,000 in campaign funds for personal expenses, is running for a sixth term in California’s 50th District. Despite the allegations, which Hunter denies, he is still expected to hang on to his seat in the heavily Republican district.