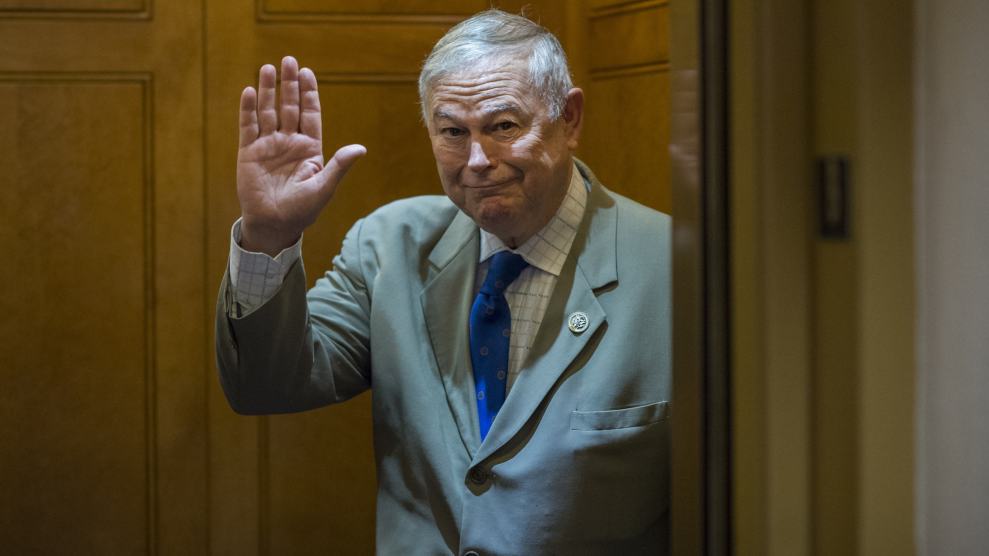 Just two days after an anti-immigrant gunman murdered 11 people at a Pittsburgh synagogue, one of the most controversial members of Congress took to the airwaves to spread a baseless conspiracy theory about the caravan of asylum-seeking migrants currently traveling toward the US-Mexico border. “I don’t know who’s behind this and financing this column of invaders coming into our country,” said California Republican Dana Rohrabacher during a Monday interview with Breitbart News Tonight. “But it didn’t just happen on its own.”

The notion that the caravan is receiving shadowy financial backing from someone determined to harm the United States has become popular on the right in recent weeks. While Rohrabacher didn’t identify a culprit behind this nefarious plot, many conservatives have suggested, falsely, that billionaire Democratic donor George Soros is funding the migrants’ journey. On October 18, Trump shared a video of someone handing out something to migrants and wrote, “Can you believe this, and what Democrats are allowing to be done to our Country?” A day earlier, Rep. Matt Gaetz (R-Fla.)—whose fundraiser Rohrabacher attended alongside an alleged Holocaust denier this summer—also shared that video and wondered over Twitter whether Soros or “US-backed NGOs” were paying migrants to “join the caravan [and] storm the US border [at] election time.”

On October 19, the National Rifle Association claimed that “a bevy of left-wing groups are partnering with a Hungarian-born billionaire [Soros] and the Venezuelan government to try to influence the 2018 midterms by sending Honduran migrants north in the thousands.” On October 22, Rep. Louie Gohmert (R-Texas) said on Fox News, “I can’t help but think that the Democrats—perhaps Soros, others—may be funding this, thinking it’s going to help them.”

After a Trump fanatic who trafficked heavily in Soros conspiracies sent a pipe bomb to the Democratic donor last week, critics demanded that Republicans rein in their party’s demonization of Soros and other prominent progressives. Then, on Saturday, a gunman who was apparently obsessed with the caravan and immigration-related conspiracy theories opened fire at Pittsburgh’s Tree of Life synagogue. Shortly before the shooting, the suspect wrote online that HIAS—a Jewish group that aides refugees—”likes to bring invaders in that kill our people. I can’t sit by and watch my people get slaughtered. Screw your optics, I’m going in.”

In his comments Monday, Rohrbacher applauded Trump’s response to the caravan, praising him for “standing up for control of the border.”

“Thank God we have a president of the United States who’s gonna stand up to this intimidation,” he said.

This isn’t the first conspiracy theory that Rohrabacher, 15-term congressman facing a tough reelection fight, has adopted. Following the deadly white nationalist protest that took place in Charlottesville, Virginia, last year, he said he believed a “Hillary and Bernie supporter” had gathered Civil War re-enactors under the pretense of protecting the city’s Robert E. Lee statue—a “setup” by “left-wingers” who were trying to “put our president on the spot.”