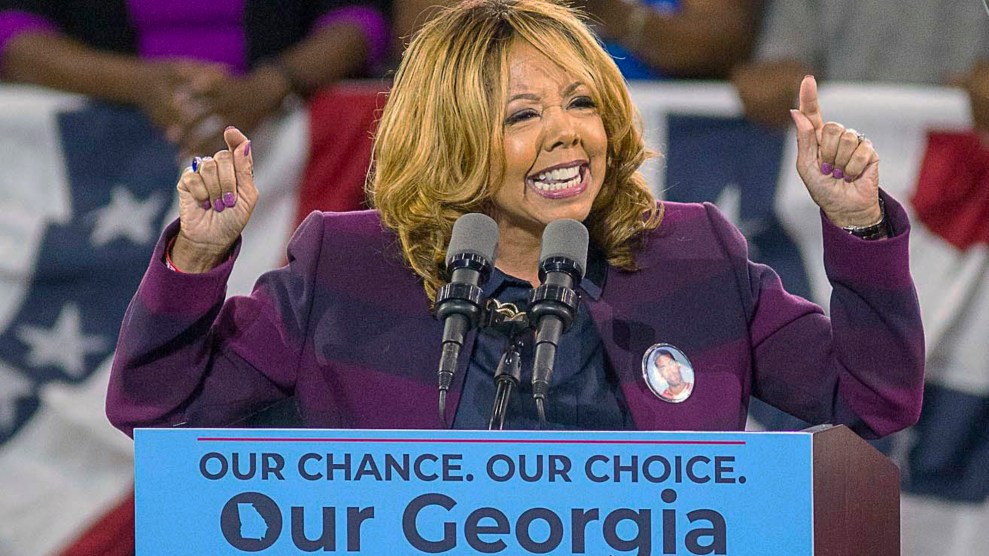 Lucy McBath speaks at a rally in Atlanta on Friday, Nov. 2, 2018.Alyssa Pointer/Atlanta Journal-Constitution via AP

In one sense, Election Day was a bit of a letdown for the Parkland survivors-turned-activists. The March for Our Lives teens had led the biggest protest in US history and crisscrossed the country registering thousands of young people to vote. And while they scored some significant electoral victories around the country, their home state efforts—which included more than two dozen stops on their Road to Change tour—appeared largely unsuccessful. Democrat Andrew Gillum on Tuesday conceded the governor’s race to Ron DeSantis, an anti-gun-control Republican endorsed by the National Rifle Association. In the Senate contest, Democratic incumbent Bill Nelson ended the night trailing his challenger, GOP Gov. Rick Scott—though the race now appears to be headed for a recount, and the outcome remains uncertain.

Still, for supporters of gun reform, including some whose lives have been forever changed by gun violence, Tuesday’s results contained plenty to celebrate. On Thursday morning, Lucy McBath—whose 17-year-old African-American son Jordan Davis was murdered in 2012 by a white man after the two argued about music playing in Davis’ car—narrowly won her race against GOP Rep. Karen Handel in Georgia’s 6th congressional district. McBath will join the new Democratic majority in the US House and will have the opportunity to vote on an ambitious suite of gun control legislation that Republican leaders had for years refused to bring to the floor.

Following her son’s death, McBath became a gun safety activist and served as a national spokesperson for Moms Demand Action, the grassroots volunteer arm of Everytown for Gun Safety. She was also a surrogate for Hillary Clinton during the 2016 presidential campaign. Late last year, she announced plans to run for Georgia’s state House on a gun-reform-focused platform. After Parkland, she set her sights on higher office. “Shame on me if I don’t do this, if I’m helping everyone in the nation but not my own state,” she told Mother Jones about her decision to run for Congress back in April. “I don’t know how to be a politician, but this is the time to move forward.”

McBath wasn’t the only parent of a gun violence victim to declare victory this week. Tom Sullivan, who lost his son Alex in the 2012 movie theater shooting in Aurora, Colorado, defeated a Republican incumbent in Colorado’s state House. The veteran had helped lead the effort to pass stricter gun laws in Colorado, home to two of the deadliest mass shootings in US history. “I’m going to make a difference for people like Alex and for families like mine,” he told Denver magazine 5280 of his candidacy. “I don’t have all the answers, but I know I have courage and determination.”

Jennifer Longdon, who survived a drive-by shooting that left her paralyzed from the chest down, succeeded in her quest for a seat in Arizona’s state House. Longdon was the subject of a 2015 Mother Jones profile that documented how her 2004 injuries financially ruined her. A gun owner herself, she worked with former Arizona congresswoman and mass shooting survivor Gabby Giffords to found an Arizona coalition that seeks to reduce gun violence, and she served as the president of Arizonans for Gun Safety. Longdon, a Democrat, focused her campaign on gun reform and disability rights.

Success wasn’t limited to those who had experienced gun violence first-hand. Christy Clark, who won a seat in North Carolina’s House of Representatives, was one of roughly 50 Moms Demand Action volunteers who sought political office this cycle. The former leader of the group’s North Carolina state chapter, she decided to run because of her state-level gun reform efforts, noting how her “many hours in the General Assembly” working on the issue inspired her campaign. Local Moms Demand Actions volunteers relentlessly canvassed and phone banked for Clark.

The success of these candidates is a milestone for the gun violence prevention movement that was reborn in the wake of the 2012 Sandy Hook Elementary School massacre. In the 1990s, Carolyn McCarthy won a New York congressional seat after she lost her husband to a shooting on Long Island’s commuter rail. Unlike McCarthy—who told Mother Jones in April how lonely her fight for firearms restrictions had been during her 18 years in Congress—these lawmakers will be joined by dozens of other newly elected officials who made gun control a key part of their campaigns.