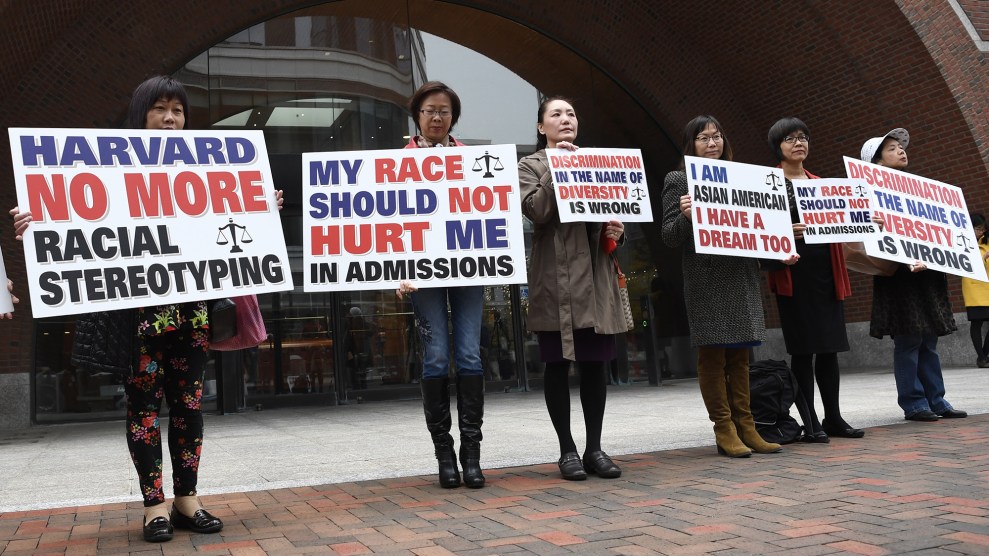 Demonstrators outside the federal courthouse in Boston where the Harvard affirmative action case is being heard.Liu Jie/Zuma

In 2014, a group called Students for Fair Admissions sued Harvard University for its use of race in selecting its freshmen class. Backed by conservative anti-affirmative action activist Ed Blum, the lawsuit argued that Harvard used a “racial quota” that discriminated against Asian American applicants. Harvard says race is one of many factors it considers in assembling a diverse student body. Oral arguments in the case ended in November, and a federal judge will hear final arguments in February. Both sides are expected to appeal if the judge rules against them, likely sending the case to the Supreme Court.

Much of their organizing has been on WeChat, a social media platform popular among Chinese immigrants as a way to stay in touch with family abroad. The app, which has more than 1 billion users, is filled with buzzy but misleading posts that easily go viral. WeChat has played a critical role in spreading anti-affirmative action activists’ views by tapping into the app’s network of recent immigrants who rely on it for news. During the debate over California’s SCA5, a bill introduced in 2012 that would have allowed voters to overturn a ban on affirmative action in the state’s public universities and colleges, WeChat users who opposed the policy dubbed the measure the “Yellow Peril Act.” They also used an abbreviation for affirmative action that prevented its common Chinese translation as an “equal opportunity act” from spreading. The measure never made it onto the ballot—it was tabled in 2014 in response to the backlash from Asian Americans.

OiYan Poon, a professor of education at Colorado State University, studies Asian Americans’ relationship with affirmative action. She began using WeChat as a research tool a few years ago, and recently coauthored a report on the platform’s role in spreading misinformation among immigrant communities. Mother Jones recently spoke with Poon about WeChat’s role in mobilizing opposition to affirmative action.

Mother Jones: How did you first come across WeChat? How have you used it in your research?

OiYan Poon: I’ve been doing research on the politics and the relationship between Asian Americans and affirmative action for over 10 years. I began focusing increasingly on the question of admissions and about three years ago, a mentor of mine had asked me if I’d ever spoken personally with Asian American opponents of affirmative action. This was about a year after the SCA 5 debate in California. And there was a lot of blowback, particularly led by Chinese Americans, particularly immigrants. SCA 5 was effectively ended by these protests. I came across WeChat because when my research team and I were reaching out to potential interview subjects, it was very easy to secure interviews for supporters of affirmative action. On the opponent side of things, it was very difficult to identify people. We knew they were out there, but when we looked up these organizations, most of them didn’t have a web or social media presence. After an interview, I mentioned to the subject, who was a Chinese immigrant, that I was having challenges with identifying opponents of the policy and the person basically said, “Have you tried WeChat?”

“You basically have a vacuum of mainstream information that allows for the spread misinformation.”

MJ: What is it about WeChat that makes it so useful for this kind of organizing? And what makes it different, or similar, to other chat platforms like Messenger or WhatsApp?

OP: In many ways, it’s not that much different than other kinds of social media platforms. We know that Facebook and Twitter can have echo chambers of information, that there’s fake information and misinformation that gets spread in those in those spaces as well. But what’s unique here is the way Chinese diaspora communities use WeChat. Many of the folks that are leading the anti-affirmative action movements here in the US came here as graduate students, after going to elite colleges in mainland China. They have a belief that high-stakes testing is the only and fair way to get into the best colleges, and they have a very narrow sense of what a good college is. Many of them, because of their class status, end up in relatively white and upper middle class communities. And that allows for the kind of development and perpetuation of stereotypes of other people. So it’s not just WeChat alone, it’s all of these things coming together on a global stage.

MJ: That makes me think of something I heard a lot during the midterms, which is that Asian Americans are the least likely racial group to be contacted by a political campaign. Do you see that isolation as part of why this has come together?

OP: Yeah, that stat is true. Political candidates tend not to reach out to Asian American voters. The difference here with the Chinese immigrant community that is very activist around affirmative action is that they’re frustrated, like, “Why are we getting ignored?” And I don’t blame them for feeling that way. And then you layer that with the misinformation that comes through WeChat and this lack of engagement from mainstream institutions. The topics that are prevalent in mainstream news versus the topics that are prevalent on WeChat are completely different. You basically have a vacuum of mainstream information that allows for the spread misinformation. But I would add that other scholars have found that mainstream media doesn’t always get information correct on affirmative action.

MJ: What are the things mainstream media is getting wrong on affirmative action? And what happens if a small mistake makes it onto a social platform?

OP: A perfect example is there’s this myth out there right now that Harvard uses a personality rating [for applicants]. We saw practically all news outlets reporting that Harvard was rating Asian Americans lower for their personality, but I know, having access to the documents [submitted to the court] that there’s no such thing. There’s a personal rating, but Ed Blum’s media machine has been putting out statements of a personality rating and confusing people. And it’s really just connecting with people’s basic stereotypical fears. It’s inflammatory and it just goes completely viral.

MJ: Where does WeChat sit in the context of the bigger conversation we’re starting to have about social platforms and misinformation?

OP: Before WeChat, there were things like QQ and Weibo for mainland China. But for whatever reason, WeChat has just taken over as the number one platform for mainland China and for Chinese communities around the world. I have an uncle who is originally from mainland China who still has friends and family there, and the only way he can communicate with them is through WeChat. You can’t use Facebook or WhatsApp, so it’s become the app that’s most convenient for diaspora communities. But then you get caught up in everything else because it’s there. So you start exploring the various groups and some of them are extremely active to the point it feels like 50 fire hydrants going off at the same time.

WeChat has what they call microbloggers, who get known for writing about certain topics and going viral. It’s a lot like Twitter where you have to have that kind of social capital to go viral, to build up that trust. How that trust is developed is not necessarily based on verified information. Sometimes it’s just clickbait. There have been some investigations into the role of WeChat in influencing elections in Australia. It’s a very interesting case because they have compulsory voting and large communities of Chinese immigrants that are voting based on misinformation on WeChat.