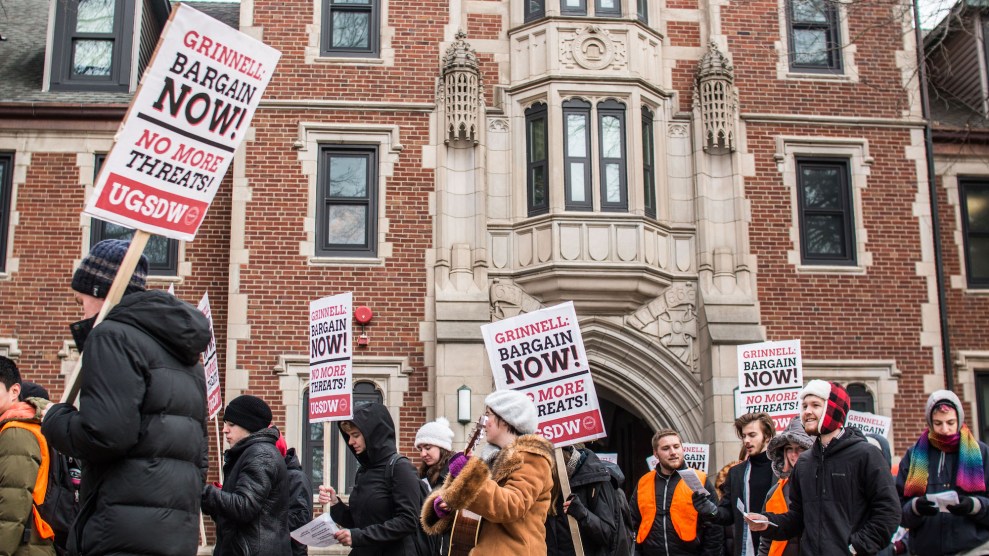 Update (12/14/18, 5:10 pm): Late on Friday, Grinnell College’s undergraduate union announced that it had decided to withdraw its petition seeking broader recognition from the National Labor Relations Board. A Grinnell College spokesperson tells Mother Jones it will not oppose the union’s request. Mother Jones has reached out the NLRB for more information.

While the majority of America’s undergraduates are squirreled away in campus libraries preparing for finals, student workers at Grinnell College are preparing for a union showdown that could have serious implications for the future of organizing in the Trump era.

A reversal could “eliminate student organizing.”

The previously friendly relationship between the small, private Iowa college’s administrators and its undergraduate student worker union began to sour in 2017, when the union announced its intentions to expand representation from roughly 300 dining workers to potentially 1,200 student workers campuswide. The school’s efforts to block the vote were rejected by the regional office of the National Labor Relations Board, and in November, 274 of 366 voting members passed a motion to expand the union. The college is now appealing to the full NLRB to block the union based on its “potential to interfere with Grinnell’s role in its undergraduates’ ‘academic or personal development.'”

“Expanding the union could effectively insert a third party whose priorities are economic, not educational, into learning outside of the classroom and alter the relationship between students and faculty,” administrators wrote in explaining the college’s anti-union stance. “These are consequences that we believe will chip away at the College’s core mission and culture, impede learning, and ultimately diminish educational opportunities for students.” According to Grinnell’s NLRB complaint, roughly 70 percent of the school’s population receives financial aid that includes work study, but the award “supports their overall academic education.” The school argues that “funding is not pay for a job.”

Students say the appeal to the NLRB, where the case will be heard by a Trump-appointed conservative majority, goes against the school’s progressive values. “The actions of the college and the administration are absolutely egregious,” says Quinn Ercolani, president of the Union of Grinnell Student Dining Workers (UGSDW) and a 20-year-old junior at the college.

Since then, undergraduate workers have earned other modest, but meaningful, gains, including at Grinnell. The UGSDW was voluntarily recognized by the school in 2016, making it the first undergraduate union at a private college. Since it was recognized, Grinnell’s union won a 9 percent wage increase, paid breaks, and bonuses for students who work 110 hours or more in a semester. The union was also able to ensure equal pay for high school students working in the dining system.

Grinnell’s decision to appeal to the full NLRB could have effects far beyond its campus and stymie student worker organizing nationwide. In its 45-year history ruling on higher education unions, the NLRB has vacillated widely, but under the Obama administration, the scale tipped in the favor of student workers. In overturning a landmark 2004 decision, the NLRB ruled in 2016 that Columbia University grad students counted as employees under federal law, and authorized a small population of undergraduate workers to join their union.

“The actions of the college and the administration are absolutely egregious.”

But in the latest dispute, college administrators have been far less accommodating. Lawyers from Proskauer Rose LLP, a firm hired by Grinnell that has been behind other union-busting efforts at private colleges like Duke and Yale, argue that the 2016 NLRB decision granting labor protections to undergraduates was a mistake, and that expanding the union at Grinnell “represents an extreme and wholly unjustifiable extension of the Board’s highly controversial decision in Columbia University.” While the Columbia union was only roughly 8 percent undergraduates, an expanded Grinnell union would cover more than two-thirds of students.

Under a conservative majority, the Trump NLRB has already rolled back a number of Obama-era decisions, including standards that allow for smaller union bargaining units and a ruling that increased corporate responsibility for franchise owner actions. With Grinnell’s appeal, the board will have the chance to undo recently won higher education protections and undermine student bargaining power.

A reversal could “eliminate student organizing,” warned William B. Gould IV, a Stanford University law professor and a former NLRB chair, in an interview with the Des Moines Register. “There will be no obligation for colleges and universities to bargain with student workers.”

Earlier this year, unions at the University of Chicago, Boston College, and Yale University all withdrew from the NLRB’s federal review process, citing similar fears that the board would rule against them and weaken pro-union precedents. According to Bloomberg Law, in 2018, unions at just four private colleges were able to secure contracts without NLRB involvement. Four colleges (including Grinnell) have refused to negotiate with student unions, and four schools have ongoing union talks.

Unaffiliated with any national unions, UGSDW has been left to manage the administration’s assault on its own. While the chance of a mutual agreement seems unlikely, Ercolani says students have no intentions to withdraw the petition for expansion.

“We don’t want to be browbeaten by an anti-union administration,” says Ercolani.

“No one enjoys it when the democratic free choice of students is made completely irrelevant.”

Grinnell’s student government has passed a resolution supporting the drive, and a group of alumni wrote an op-ed in the Register asking the college not to stand in the way of the union’s expansion: “We urge Grinnell College to look to higher educational institutions such as Georgetown University and NYU, where, despite the Trump NLRB context, administrations have decided not to appeal election results and instead to respect the results.”

“By spending hundreds of thousands of dollars on attorneys to appeal to the Trump board, Grinnell College is putting in jeopardy unionized student workers from colleges and universities across the United States,” they wrote.

While it’s unclear when the NLRB will decide the case, tensions between students and administrators continue to escalate. While a strike authorization vote failed last Friday, Ercolani says union members will continue to resist the administration’s attempts to quash its expansion. Ercolani also tells Mother Jones that the school recently made threats of filing student misconduct charges over a protest that involved roughly 50 students. (In a statement to Mother Jones, Debra Lukehart, vice president of communications at Grinnell, declined to directly address Ercolani’s charge, but wrote that the school has communicated with protestors that “protests must always be conducted in a non-threatening manner that does not impede access to campus buildings or interfere with the educational experience of students.”)

“The general sentiment among students is upset,” says Quinn. “No one enjoys it when the democratic free choice of students is made completely irrelevant.”

Mother Jones has reached out to Grinnell for comment.