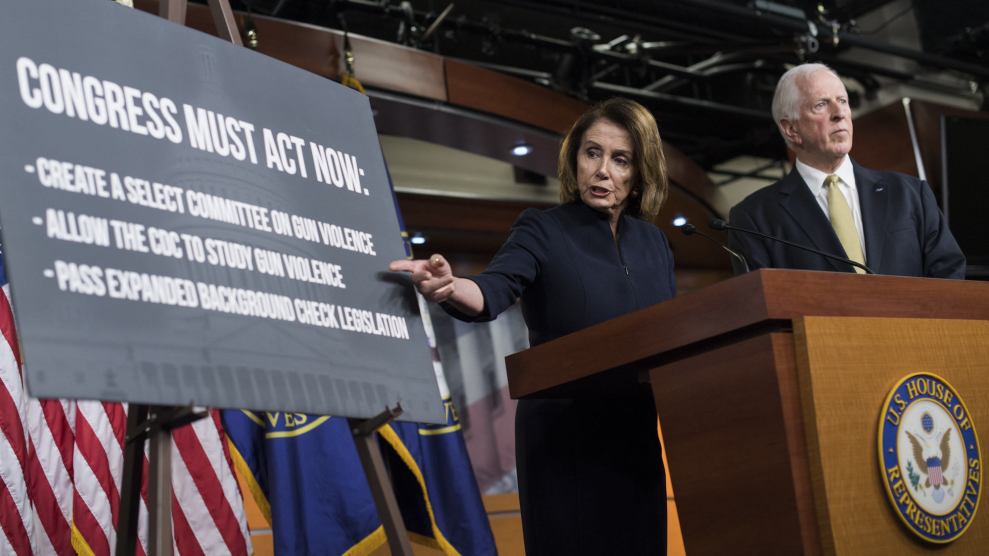 House Democrats plan to prioritize a bill that will require a background check for every gun sale, according to multiple sources close to the matter. The legislation represents an aggressive shift in strategy by Democrats and their gun reform allies, who in previous years had tended to pursue more modest background check bills that would have exempted large numbers of gun purchases.

Federal law currently only requires licensed firearm retailers, such as gun stores or hunting shops, to run the would-be buyer through the FBI’s National Instant Background Check System. This means any firearms purchased outside those venues—on the internet or from a private dealer at a gun show, for instance—can be sold without taking that step. According to a 2017 study in the Annals of Internal Medicine, which was funded in part by supporters of gun control, 22 percent of US gun owners obtained a firearm without a background check over the past two years.

Attempts to strengthen background checks have languished at the federal level since the 2012 Sandy Hook Elementary School shooting that left 26 dead. In the wake of the massacre, the Senate failed to pass a bipartisan measure sponsored by Sens. Pat Toomey (R-Pa.) and Joe Manchin (D-W.V.) that would have partially closed the private gun sale loophole but would not have required background checks when family and friends wanted to sell firearms to one another. Though Manchin proclaimed at the time that “if you’re a law-abiding gun owner, you’ll love this bill,” an intense lobbying campaign by the National Rifle Association destroyed its prospects.

Since then, legislation that echoes the Manchin-Toomey provisions has languished in the GOP-controlled Congress. Reps. Mike Thompson (D-Calif.) and Peter King (R-N.Y.) have reintroduced the measure twice in the last four years, but House Speaker Paul Ryan (R-Wis.) refused to bring the bill up for a vote—even as it racked up 208 co-sponsors, including 14 Republicans.

But with Ryan leaving Congress and Democrats winning control of the House, Thompson now plans to introduce a bill that will go further than any of those earlier proposals: It will require a background check for every gun sale or transfer, regardless of who’s doing the selling or transferring. The move has been in the works since before the election, when Thompson met with outside gun reform allies like the Brady Campaign to Prevent Gun Violence, Everytown for Gun Safety, the Center for American Progress, the Coalition to Stop Gun Violence, and Giffords to talk about what they might push for if Democrats won the House.

To take such a hard line with no track record of legislative success could be a risky move, but gun control advocates point to the 2018 midterms as proof the political calculus on guns has shifted. A record 97 percent of people polled voiced support for universal background checks in the wake of the February shooting at Stoneman Douglas High School in Parkland, Florida, and many Democratic congressional candidates successfully flipped red seats while running on platforms calling for stricter gun regulations. Earlier this week, 46 incoming House Democrats wrote a letter to Rep. Nancy Pelosi (D-Calif.), the likely speaker, calling for gun reform to be among the first priorities Democrats address in January.

Thompson also expects the background check bill to have some Republican support when he introduces it in the next session; indeed, King’s office confirmed to Mother Jones that he plans to sign onto the bill.

“The American people are on our side,” says Robin Lloyd, director of government affairs at Giffords, which was founded by former Arizona congresswoman and mass shooting survivor Gabby Giffords. “We’ll get strong universal background checks out of the House, and we believe it’s going to be bipartisan.”

The precise details of the legislation have not been finalized; Thompson is still discussing the bill with his fellow Democrats and plans to release more specifics sometime before the end of the year. Pelosi’s office told Mother Jones it could not confirm details about when the bill would be introduced in the next session, but its emergence makes good on a promise Pelosi made to the student survivors of the Parkland shooting—with whom she regularly discusses gun reform priorities—about passing universal background checks if Democrats regained control of the House.

And while the bill will almost certainly pass the House, there’s little evidence to suggest Senate Majority Leader Mitch McConnell (R-Ky.) will bring it up for a vote or that President Donald Trump would be willing to sign it. But success in the House would be a signal to voters of Democrats’ commitment to the issue. A House vote would also put Republicans on the record on the matter—something that hasn’t happened during eight years of GOP control.