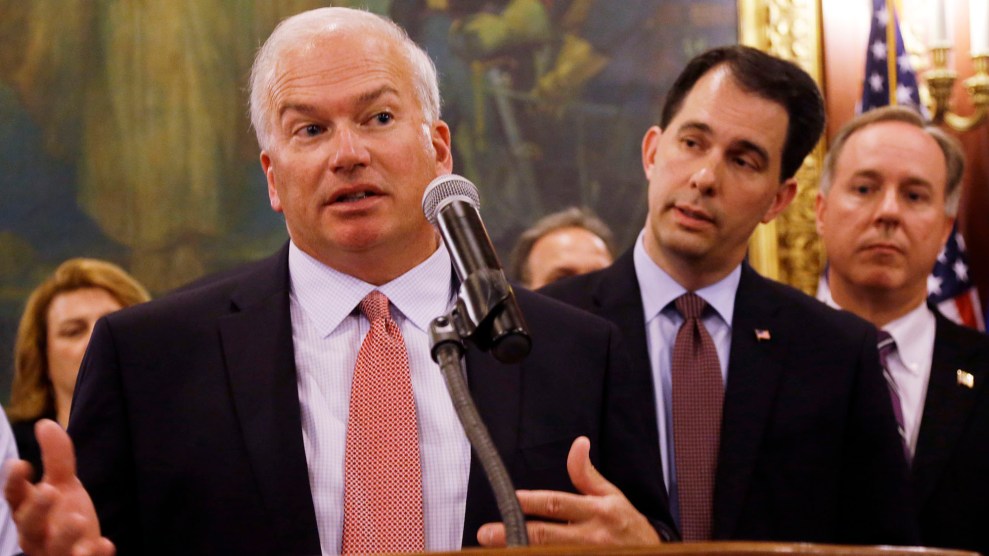 The 2018 election saw historic victories for voting rights. Seven states passed ballot initiatives that will make it easier to vote and harder to gerrymander. And some of the biggest cheerleaders for restricting access to the ballot, such as Wisconsin Gov. Scott Walker and Kansas Secretary of State Kris Kobach, lost their gubernatorial races.

The new effort to cut early voting is similar to a previous law that was struck down by a federal court. In 2014, Wisconsin’s Legislature cut early voting from 30 days to 12, reduced early voting hours on nights and weekends, and restricted early voting to one location per municipality, hampering voters in large urban areas. A federal judge ruled in 2016 that the early voting cuts “intentionally discriminate on the basis of race” and had been passed “to suppress the reliably Democratic vote of Milwaukee’s African Americans.”

After the law was overturned, jurisdictions in Wisconsin, particularly in places like Madison and Milwaukee, expanded early voting locations and hours, leading to record turnout in 2016 and 2018. Democrats have pledged to sue if the new law is passed by the Legislature on Tuesday.

We sued Wisconsin over their ID law in 2016. We sued again when Wisconsin failed to hold special elections. If the GOP thinks they can disenfranchise voters by cutting early voting without a fight, they are wrong. https://t.co/EvVuBUIAze

The new bill would also prevent Evers from making the state’s voter ID law less restrictive by barring him from expanding the types of IDs Wisconsinites can use to vote. The law, which first went into effect in 2016, led to a sharp decrease in black voter turnout in the last presidential election. A study by the University of Wisconsin-Madison found that the ID requirement kept as many as 23,000 people from voting in two of the state’s most Democratic counties, Milwaukee County and Madison’s Dane County, with African Americans more than three times as likely as whites to be deterred from voting. President Donald Trump won the state by that very margin. “It is very probable,” Milwaukee’s top election official, Neil Albrecht, told Mother Jones last year, that “enough people were prevented from voting to have changed the outcome of the presidential election in Wisconsin.”

The GOP bill would also move the state’s 2020 presidential primary from April to March, while keeping the state Supreme Court election in April. A lower turnout in the court race would likely benefit Republicans and help them keep their majority on the court.

But a new bill introduced by Michigan Republicans would cut off voter registration 14 days before the election, effectively overturning the Election Day registration initiative. A separate proposal would strip power from Benson by removing oversight of campaign finance laws from the secretary of state’s office, instead giving the authority to a state panel composed equally of Democrats and Republicans. Benson said the proposal would “lead to more gridlock and less enforcement of our already weak campaign finance laws” and called the lame-duck moves an “insult” to voters.

The Ohio Legislature is going a step further and introducing legislation to make it nearly impossible for citizen-led groups to amend the state’s constitution. In May, Ohio voters overwhelmingly approved a constitutional amendment that will make it more difficult for legislators to gerrymander congressional districts during the next redistricting cycle. Ohio is one of the most heavily gerrymandered Republican states in the country.

In response, the Republican-controlled Legislature is fast-tracking a bill that would require 60 percent support from voters to change the state’s constitution, instead of a simple majority. It also states that signatures gathered for a citizen-led initiative are valid for only 180 days—previously they didn’t expire—and must be submitted by the beginning of April before a November election, instead of July, meaning that signature drives will have to take place during the frigid winter months in Ohio, when it’s toughest for groups to organize. The proposed changes “would make it nearly impossible for grassroots activists to amend the constitution at the ballot,” tweeted Mike Brickner, Ohio state director for All Voting Is Local, a voting rights group.

Republican efforts to strip Democrats of power during lame-duck legislative sessions originated in North Carolina in 2016. Following the election of Democratic Gov. Roy Cooper in 2016, the Republican-led Legislature passed a series of bills to reduce his power, which included preventing the governor from appointing a majority of members to the state board of elections and 100 county boards of elections.

Now the North Carolina Legislature is at it again. It originally passed a voter ID law in 2013 that the federal courts said targeted black voters “with almost surgical precision.” After that law was struck down in court, the Republican Legislature put a constitutional amendment on the ballot in 2018 requiring government-issued photo ID to vote. It passed with 60 percent support on Election Day, but because Republicans lost their legislative supermajority in 2018, they’re rushing to pass a bill implementing the amendment in the lame-duck session so Cooper will be unable to veto it.

Republicans in all four of these states owe their majorities partly to extreme partisan gerrymandering. Ohio Republicans barely got 50 percent of the vote in last month’s elections, but hold a supermajority in the Legislature, while Republicans in Wisconsin, Michigan, and North Carolina got a minority of votes but control a majority of seats. Now, by stripping power from Democratic officials who won a majority of votes and enacting laws making it harder to vote, they are further enshrining minority rule.