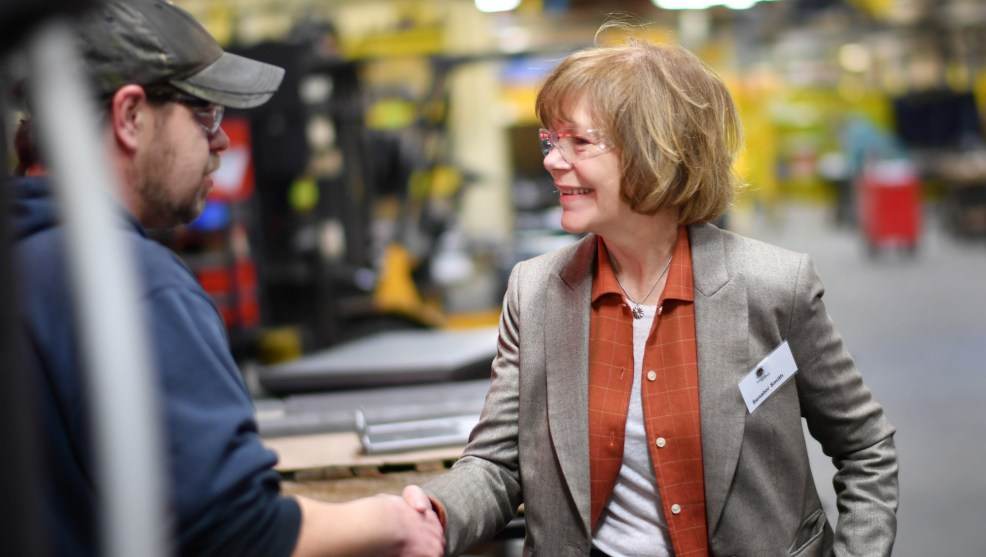 Sen. Tina Smith (D-Minn.) is working to make sure federal contractors across the country get back pay from the government shutdown.Glen Stubbe/Star Tribune/ZUMA Wire

In what is shaping up to potentially be the longest shutdown in US history, federal contract workers are at risk of losing almost a month’s worth of income. The severity of the shutdown has pushed the Senate to do something it has never attempted before: get back pay for federal contractors.

Around 800,000 federal employees are currently furloughed or working without pay. But while many are struggling with rent or paying bills at the moment, they can expect to get their salaries made whole once the government reopens. After every past shutdown, Congress cobbled together bipartisan support to approve back pay for civilian workers. But Congress has long left contractors in the lurch. Most of the more than 3 million people who earn a living as federal contractors—jobs ranging from janitorial staff to IT specialists—haven’t recouped the money they lost during past shutdowns.

“At the end of the day, the impact on these lower-wage workers, folks that are making $20, $22 an hour—as one woman said to me, ‘If I don’t get paid, I don’t pay my bills’—seems to be the most urgent issue and also, in my mind, just basic fairness,” Sen. Tina Smith (D-Minn.) tells Mother Jones.

The new legislation, helmed by Smith’s office, is hoping to fix that. The bill, which is still being drafted, has gotten early sign-ons from Sens. Sherrod Brown (D-Ohio), Mark Warner (D-Va.), Chris Van Hollen (D-Md.), Ben Cardin (D-Md.), and Tim Kaine (D-Va.). The text of the legislation, which would work out a plan to repay the lowest-income government contract workers, is still days away from being introduced, and Smith was unable to offer any specific details as to how it might be implemented.

“We want to make sure that we get it right, and that’s what we’re focused on now,” Smith says. “I think my colleagues in the Senate are trying to address this mess, where people are being used as basically bargaining chips in this shutdown the president has created and shouldn’t have to pay such a price.”

The Senate plan is paired with a similar bill reintroduced in the House on Tuesday by DC Del. Eleanor Holmes Norton. Norton, with the support of representatives from Maryland and Virginia, has tried (and failed) to pass legislation that would pay back the lowest-earning federal contractors for wages lost for every shutdown since 2013.

Despite these efforts, there are a host of legal and financial complexities involved with paying contractors who are, legally, the employees of private companies. Neither members of the House nor the Senate were able to provide the exact number of workers that would be covered by the legislation, or how their individual bills might get around the legal complexities. Norton’s bill has never made it out of the appropriations committee in the past, and also offers little details as to how repayments might work. That bill, which Norton has reintroduced in the same form this year, is quite short, and doesn’t explain how it would get around any legal difficulties, only saying: “If a Federal contractor that provides retail, food, custodial, or security services to the Federal Government places the employees of such contractor on unpaid leave as a result of any lapse in appropriations which begins in fiscal year 2019, the Government shall provide compensation to such employees at their standard rate of compensation for the period of such lapse.” Smith says that the number of contractors who would benefit from her upcoming bill will continue to change as the shutdown goes on, but that her staff currently estimates that “thousands of workers” could be covered.

According to one estimate, in 2015 there were 3.7 million federal contract workers across the United States, but how these workers are affected during the shutdown can vary. Some contractors have guarantees from their employers or unions that they will receive back pay; others are at the whims of the agency that funds their employers. But it’s the lowest-earning contractors, often food and janitorial workers in government buildings, that are most frequently left without pay or recourse. While neither Smith nor Norton could indicate a specific income range for who would be covered, both say it’s the lowest-earning federal contractors their bills are focused on.

Despite failed attempts in the past, proponents of the bills say they have two things going for them this time around that make them optimistic the bills will pass: a House newly controlled by Democrats and lack of support for a shutdown that is holding the livelihoods of thousands hostage because of the president’s desire for a border wall.

Now that the House is back in the hands of Democrats, the bill could see markedly different results. Norton’s bills, which traditionally only saw support from regional allies around the DC metro area whose constituents were most affected by the shutdown, is also being co-sponsored this year by representatives outside the area, including Reps. Suzanne Bonamici (D-Wash.), Ro Khanna (D-Calif.), Grace Meng (D-N.Y.), Gwen Moore (D-Wis.), Mark Pocan (D-Wis.), and Ayanna Pressley (D-Mass.).

“Champions for working families in Congress must ensure that we do not forget these workers when we finalize a deal,” Khanna wrote in a statement to Mother Jones. “I am proud to be an early supporter of legislation sponsored by DC’s Rep. Eleanor Holmes Norton to ensure they receive back pay so that they can cover their rent or buy delayed holiday gifts for their loved ones.”

Unions who represent low-income contract workers in the district have also been pushing for Congress to act. 32BJ SEIU says that 2,000 of its members, mostly building service workers, have gone without pay because of the shutdown. Unite Here Local 23, which represents federal building cafeteria workers, says that 500 of its members have been unable to return to work during the shutdown. Those workers all make under $32,000 a year.

“All workers should be made whole, whether they’re working at the Department of Interior or they’re working for Sodexo in the cafeteria at the Smithsonian,” Sen. Brown told workers at a Unite Here meeting on Tuesday. On Monday, Rep. Pressley wrote a letter to House leadership urging them to “stand in solidarity with these workers and ensure that any agreement includes retroactive pay for all workers forced to go without pay during the government shutdown, including those low-wage contracted service workers who have been harmed by the actions of this administration.”

“We need to not hold federal workers and contractors hostage for the president’s border wall, which is a symbol, not a solution,” Smith says. “This is about basic fairness.”

We want to hear from you: Are you a federal worker or contractor affected by the government shutdown? What does missing your paycheck mean to you and your family? Let us know in the form below, send us an email at talk@motherjones.com, or leave us a voicemail at (510) 519-MOJO. We may use some of your responses for a follow-up story.