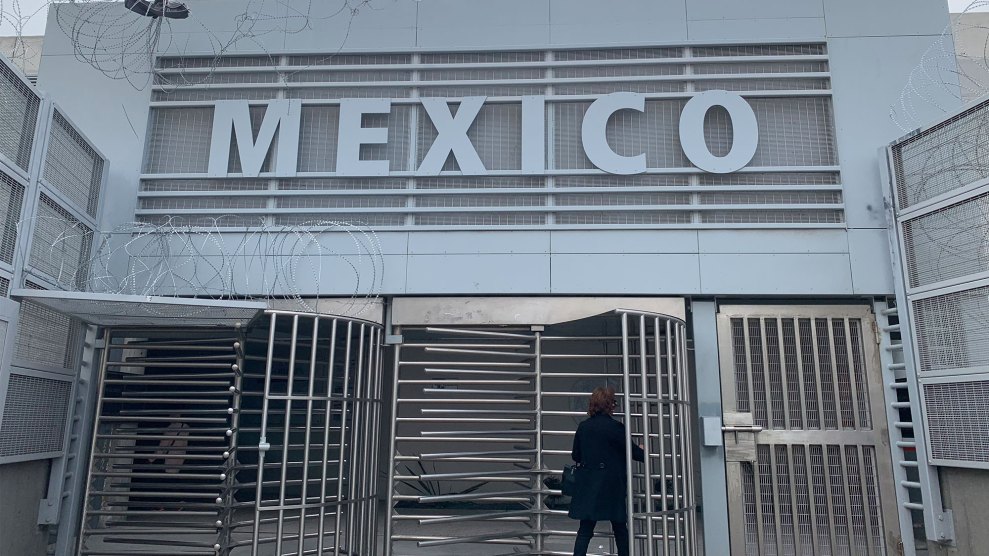 G.B. sat up straight and adjusted the headphones given to him by an interpreter. “Good afternoon sir,” the judge said. “Si, señor,” G.B. responded, and the interpreter translated: “Yes, sir.”

“Go ahead and try to relax,” the judge continued. “I can tell you’re nervous.”

A 29-year-old Honduran whose lawyer requested he not be identified by his full name for safety, G.B. had plenty to be nervous about in San Diego immigration court Tuesday. He was among the first Central American asylum-seekers to be impacted by a new Trump administration policy that forces asylum-seekers to wait in Mexico while their immigration cases are pending in US court. That morning, his lawyer had picked him up at the shelter where he’d been staying in Tijuana, they showed up to the official port of entry, and G.B. was told he’d be transported by an Immigration and Customs Enforcement-contracted security firm to court.

When he got there, it was far from clear how the hearing would go—it was one of the first. But if what happened for him and five others Tuesday is any indication, the new policy is making immigration court proceedings a lot more chaotic. There are still numerous logistical and procedural problems that need to be worked out, especially as more of these hearings begin to take place.

“There has also been confusion about court dates for some people, and people are getting conflicting information.”

“They were unclear about how the court was doing things,” says Lisa Knox, an immigration staff attorney with Centro Legal de la Raza. “There were people who didn’t know how their clients were going to be transported or who was the point of contact for that process. There has also been confusion about court dates for some people, and people are getting conflicting information.”

The Trump policy, officially called Migrant Protection Protocols but known commonly as Remain in Mexico, aims to stem the rising tide of migrant families coming to the US border. It’s not clear whether it’ll have that effect, but it’s already making life demonstrably harder for asylum-seekers. First, they’re subjected to dangerous conditions in cities like Tijuana, where they’re often targeted by gangs, kidnappers, and extortionists. Second, they have very limited access to US legal representation, which data shows dramatically increases immigrants’ chances of having their asylum claims approved. It took effect in late January at just the border crossing between Tijuana and San Diego, but has since expanded to Calexico, California, and El Paso, Texas. Secretary of Homeland Security Kirstjen Nielsen recently said she’d like to see it become the new norm all along the border.

G.B. is one of 240 people who have been sent back to Mexico so far. On Tuesday, two months after he first asked for asylum at the port of entry, he finally had his time in immigration court to formally submit an asylum application. But his lawyer, Robyn Barnard of the nonprofit Human Rights First, was also hoping the assistant chief immigration judge Rico J. Bartolomei would grant his request to stay in the United States because he feared for his safety in Tijuana. Two other Central American asylum-seekers similarly said on Tuesday that they feared for their safety and asked not to be sent back to Tijuana.

“Mexico is not safe for all people,” says Barnard. “Particularly for vulnerable groups like asylum-seekers, it can be very risky. There are individuals who prey on groups like this. My clients themselves have received threats because they’re in a foreign land and they’re seeking shelter and help in Tijuana.”

She submitted evidence of G.B.’s risks in Tijuana and asked the judge to keep G.B. from being sent back. The Department of Homeland Security attorneys present didn’t object, saying it’d be up to US Customs and Border Protection (CBP) officials at the San Diego border crossing to determine if G.B.’s fear of returning was credible.

“Mexico is not safe for all people.”

Barnard, though, was worried about that interview actually happening—and reiterated more than once the importance of sharing information in real time between different agencies within DHS. “Frankly, I don’t trust that if I speak to one officer at the port of entry [the interview] is going to take place, so now the court is on notice that they have a fear of return,” Barnard says.

This came up again in other cases Tuesday, with unsure responses from DHS lawyer Jason Aguilar as to which issues were to be resolved by which government agency—CBP or ICE or United States Citizenship and Immigration Services.

“If nobody knows who’s responsible for figuring out if someone can be sent back to Mexico, [the asylum-seekers] are the ones that end up hurting,” Knox says. “They’ll either get sent back or are stuck in custody while someone figures that out.”

In the courtroom, Knox echoed Barnard and told Bartolomei about the challenges of having clients in Tijuana throughout this process while their lawyers are in Northern California. They can’t have face-to-face conversations to properly prepare asylum cases, and some of the asylum-seekers are staying in shelters in Tijuana where they may not receive written notices from the court about their cases, leading to confusion about when and where they should show up in court—and even how they’d get there.

This is more or less what human rights organizations and legal aid groups have been warning; they’ve criticized Remain in Mexico since it was announced, saying it violates US and international law, which protect the right of people fleeing persecution to claim asylum in a country they have entered. Not only are asylum-seekers vulnerable in Mexican border towns, they say, but they’re also deprived of a meaningful opportunity to prepare a legal case and seek asylum. This policy has been challenged in federal court, and the first hearing on this case will be held on Friday March 22.

At the end of G.B.’s hearing, Bartolomei scheduled his next appearance for August, where they’d discuss his asylum claim in the United States. A few hours later, G.B. was driven back to the border, where he spent the night in a holding cell on US soil. The next day, he had a three-hour interview there to make his case for why he would be at risk in Tijuana. Barnard was able to join via telephone and said G.B. hadn’t eaten or slept for two days so he was not in his best frame of mind.

For now, he’ll remain in a holding cell at the border until officials decide whether to send him back to Mexico. If they decide not to, he’ll likely either be placed in a long-term immigration detention center or given an ankle monitor and released to family members in the United States until his August hearing.

“It was very disconcerting to be in the courtroom asking questions to chief counsel and there being no answers.”

“It was very disconcerting to be in the courtroom asking questions to chief counsel and there being no answers, and it seemed like they were still figuring it out,” Barnard says. “You shouldn’t be creating new systems for asylum-seekers and for the immigration process on the fly. To me, it spells all kinds of potential for due-process violations and very real consequences.”

DHS did not respond to requests for comment. A spokeswoman with the Justice Department office that oversees immigration court proceedings did not respond to specific questions regarding what, if any, new protocols will be put in place to handle hearings for people forced to remain in Mexico. All she did say in an email was that her office would process and adjudicate Remain in Mexico cases “in accordance with applicable law and consistent with due process.”