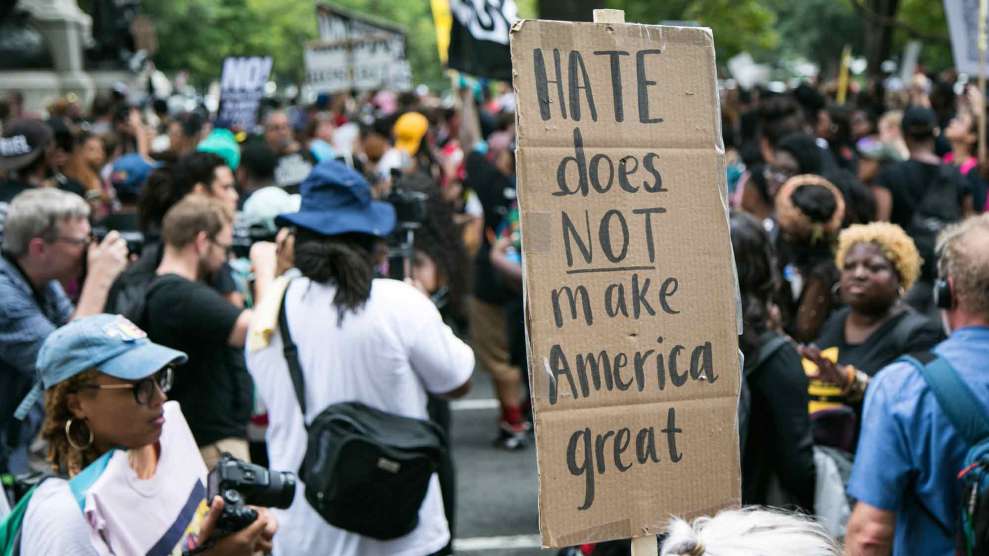 Facebook and Amazon appear to be helping hate groups fundraise through philanthropy tools hosted on their platforms.

Mother Jones found dozens of white supremacist and anti-LGBTQ organizations that appear to have access to Facebook’s Fundraiser tool, which lets users and organizations collect money for non-profits. One beneficiary is the National Policy Institute, the think tank of alt-right figure Richard Spencer, which has peddled racist and white supremacist ideals. Other groups that appear to be part of Facebook’s fundraising portal include the white-nationalist website VDare and several Islamophobic organizations labeled as hate groups by the Southern Poverty Law Center (SPLC), including the Christian Action Network and the Center for Security Policy.

“This should not be going on.”

AmazonSmile, a program through which Amazon donates 0.5% of eligible transactions to non-profits, appears to have filtered out some noxious groups—like VDare and the National Policy Institute—that Facebook allows users to donate to. But AmazonSmile includes a variety of state-level anti-LGBTQ non-profits affiliated with national organizations identified by the SPLC as anti-LGBTQ hate groups, including the Alliance Defending Freedom and the Family Research Council. The local organizations include the Alaska Family Council (a “local anti-LGBT extremist” group, according to the SPLC, that has opposed state discrimination laws) along with Idaho’s Cornerstone Family Council, South Carolina’s Palmetto Family Council, and dozens of other similar organizations.

The groups’ presence appears to violate the platform’s terms of agreement for AmazonSmile participants, which bar nonprofits that “engage in, support, encourage, or promote” actions or ideologies of “intolerance, discrimination or discriminatory practices based on race, sex, religion, nationality, disability, sexual orientation, or age.”

In an emailed statement, an Amazon spokesperson pointed to the terms,  saying that “Charitable organizations must meet the requirements outlined in our participation agreement to be eligible for AmazonSmile.”

“Organizations that engage in, support, encourage, or promote intolerance, hate, terrorism, violence, money laundering, or other illegal activities are not eligible,” the spokesperson continued. “If at any point an organization violates this agreement, its eligibility will be revoked. Since 2013, Amazon has relied on the US Office of Foreign Assets Control and the Southern Poverty Law Center to help us make these determinations.”

While Facebook’s Fundraiser tool doesn’t appear to have similar restrictions, discriminatory groups fundraising through the system may be in violation of the company’s broader community standards, which ban hate speech on the grounds of “race, ethnicity, national origin, religious affiliation, sexual orientation, caste, sex, gender, gender identity, and serious disease or disability.”

Facebook has removed far-right organizations from its platform in the past, banning several white supremacist groups in the wake of 2017’s violent demonstrations in Charlottesville, and, eventually, pages associated with Richard Spencer including one for the National Policy Institute and another for his website, Altright.com. Facebook did not respond to a request for comment before publication.

The fundraising platforms play host to many controversial groups.

Heidi Beirich, who directs the Southern Poverty Law Center’s Intelligence Project monitoring extremists and hate groups, credits Amazon’s overall efforts to curb the presence of hate groups on its platform, despite the persistent presence of some smaller, local discriminatory organizations. “They’ve been really good about trying to stop the pipeline to hate groups,” Beirich said, citing the company’s outreach to SPLC, and blacklists the watchdog provided when AmazonSmile launched that the company had used to restrict access to the tool. Beirich guessed the smaller, state-level groups on AmazonSmile weren’t on the lists.

“This should not be going on. Facebook should not be letting this happen,” she said firmly. “Keeping hate groups from having money keeps them from being able to do the terrible things that they want to do. The money aspect of it is by far of the most important. It’s their lifeblood.”

The fundraising platforms play host to many other controversial groups. Mother Jones spotted several instances of fraudulent non-profits using Facebook and Amazon’s donation tools, including Humanwire, whose founder pleaded no contest in October to charity fraud charges for embezzling $130,000 raised on behalf of Syrian refugees, as well as the Retired Enlisted Association Memorial Foundation, a veteran-assistance group that was shut down for fraud. Extremist and fringe organizations were also on the platforms, such as the Oath Keepers militia on Facebook and, on AmazonSmile, several groups that appear to be state affiliates of the Three Percent militia.

In March, the Guardian reported that anti-vaccination groups were fundraising on AmazonSmile. As of Monday, Mother Jones found that several such groups—including the National Vaccine Information Center, Physicians for Informed Consent, and Age of Autism—were still on Amazon, and also enjoyed access to Facebook’s fundraising portal. Both companies have had broader issues with anti-vaccination content on their platforms; on Thursday, Facebook announced new steps and policies to reduce the spread of “vaccination misinformation.”

Beirich said that despite Facebook’s recent work on things like vaccine misinformation, she’s disappointed with the company’s broader approach to hate groups. To her, the fundraising is just the latest example of the company failing to adequately police extremist groups.

“I’m interested to see why Facebook can’t seem to get these policies right,” she said. “They need to get their hate policies in order.”