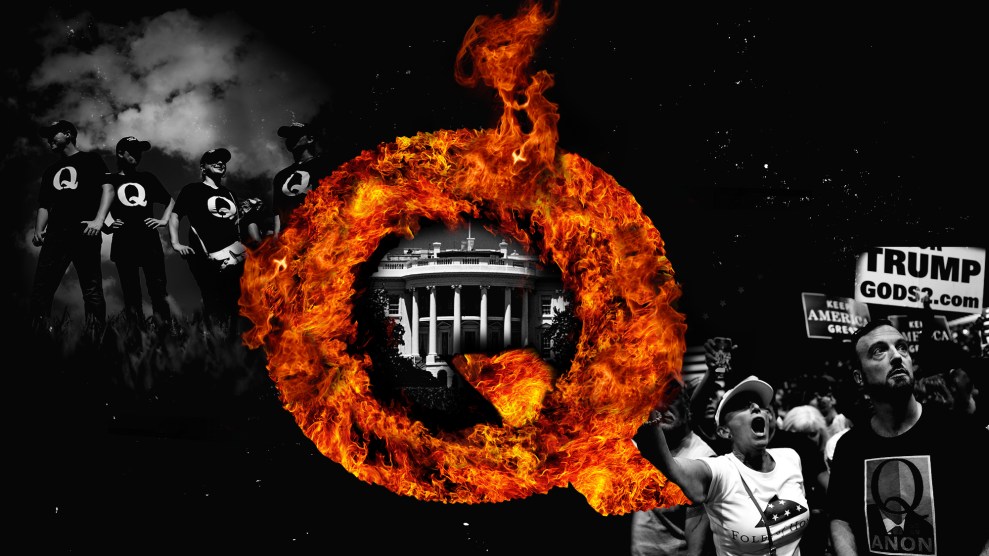 Visitors seeking the most popular entries on the White House’s official online petition site will come across topics that fall within the natural political discourse, like government ethics, abortion, and net neutrality. But it takes just a few clicks to find some startling appeals, including one calling on the president to deploy troops to Los Angeles’s Getty Museum of Art:

“We demand that our Marine Corp be called to OCCUPY THE GETTY, access the elevator to the bunker, and immediately free our children and return them to the surface. Do not allow these monsters to use underground bunkers, under the pretense of ‘continuity of Government’, to rape and eat our children in honor of their Satanic beliefs.”

If the allegation seems like the kind of harebrained theory known to circulate in social media conspiracy circles, that’s because it is. But thanks to a coordinated campaign by followers of the so-called “QAnon” movement, a group of conspiracists who analyze anonymous posts from someone claiming to be a high government official calling himself “Q,” it now also appears in the searchable index of the “We The People” petition site hosted by the Trump administration. The site features several other conspiracy-related petitions echoing—and spreading—ideas prominent in QAnon, as shared by believers on YouTube groups and on Facebook.

The petitions are attractive to Q-Anon conspiracists as a form of “slacktivism.”

While the Getty petition has only just topped 1,100 signatures, according to metrics from BuzzSumo, the petition itself has ricocheted around social media, receiving over 1,600 likes and shares on Facebook in less than a month. YouTube videos about the petition have over 6,000 cumulative views. This is the ninth time a petition to invade the Getty has been introduced by the same person, and it’s likely, as with the ones that came before, it will fail to meet the threshold of 100,000 signatures that the Obama administration, which launched the site, set to trigger some form of White House response. But the social reach of the petition demonstrates the platform’s potential to be weaponized by fringe actors seeking to legitimize their causes by associating them with an official government website. (A Getty museum spokesperson declined to comment on the conspiracy theory, citing “security concerns.”)

It’s not just QAnon that uses the site to bolster conspiracy theories. Other popular petitions have called for the White House to intervene in vaccination requirements for children; one, which reached over 70,000 signatures before its voting period expired, promoted Children’s Health Defense, which propagates medically dubious research about the purported health risks of vaccinations. In the fall, the security company New Knowledge issued a report to the Senate intelligence committee revealing that the Internet Research Agency, a Russian disinformation workshop, not only shared but created Whitehouse.gov petitions on topics including gun laws and banning Hillary Clinton from running for president.

Trolling of the White House petition website didn’t begin in the Trump-era. Almost immediately after the project’s 2011 rollout, the platform became a playground for pranksters’ petitions pleading for President Obama to build a Death Star, or designate a Nicolas Cage movie as the official film of the United States. The zaniest, including one demanding the deportation of popstar Justin Bieber, were met with a polite rebuff from the administration. It also emerged as a place to express political dissent; after Obama’s 2012 re-election, the site was filled with calls for secession and birther conspiracy theorists.

According to Travis View, a QAnon researcher, the Q movement’s appropriation of White House petitions traces back to an alleged post by “Q” on the online forum 8chan in August of 2018 that shared a link to a petition calling for the federal government to designate Antifa as a terrorist organization.

As reported by Politico, the petition was first posted a year earlier by a “well-known pro-Trump troll” following conflict between Antifa and white supremacists during the 2017 Unite the Right rally in Charlottesville, Virginia. (The same troll made a similar attempt to get Black Lives Matter categorized as a terrorist group in 2016. After the petition topped 100,000 signatures, the Obama White House responded by saying it was not involved in categorizing terrorist groups and couldn’t respond to the request.)

While the Trump administration completely ignored the site for most of his early tenure, after relaunching the platform in early 2018, the administration has responded to a select few petitions, including the one calling for Antifa to be designated as a terrorist group.

View tells Mother Jones that White House petitions are attractive to QAnon conspiracy theorists because they fit perfectly into the “slacktivism” the group thinks will bring political change. “This is a sort of an extension of their general political philosophy, which is if they get enough people together they can have an effect on the internet that can bring about real change,” he says. “It’s the same sort of impulse as to why they encourage a particular hashtag.”

The White House did not respond to questions about its use of the platform, whether it was aware of its role in spreading conspiracy theories, or if it plans to respond to a petition with nearly 200,000 signatures demanding George Soros—the liberal philanthropist of Jewish heritage who is a frequent target of online conspiracists—be declared a terrorist.

To QAnon believers, there’s another allure to the petition website: the platform’s very existence is taken as proof that purported liberal fears that Trump “is a dictator” are bunk.

Perhaps inevitably, some online conspiracists have launched conspiracies about the site itself. One YouTuber suggested that the government had tampered with a Pizzagate-related petition, reasoning the number of signatures was “much lower” compared to online interest in the conspiracy theory that Democrats ran a child sex ring out of Comet Ping Pong, a Washington, DC pizzeria.

While conspiracies like those about the Getty might seem bizarre and easily dismissed to many people, they can egg on real-life violence. In 2016, DC police arrested a man who fired a semi-automatic rifle inside of Comet Ping Pong; a subsequent arson attempt took place in January. Last year, Soros was mailed a pipe-bomb by an extremist who was radicalized online.