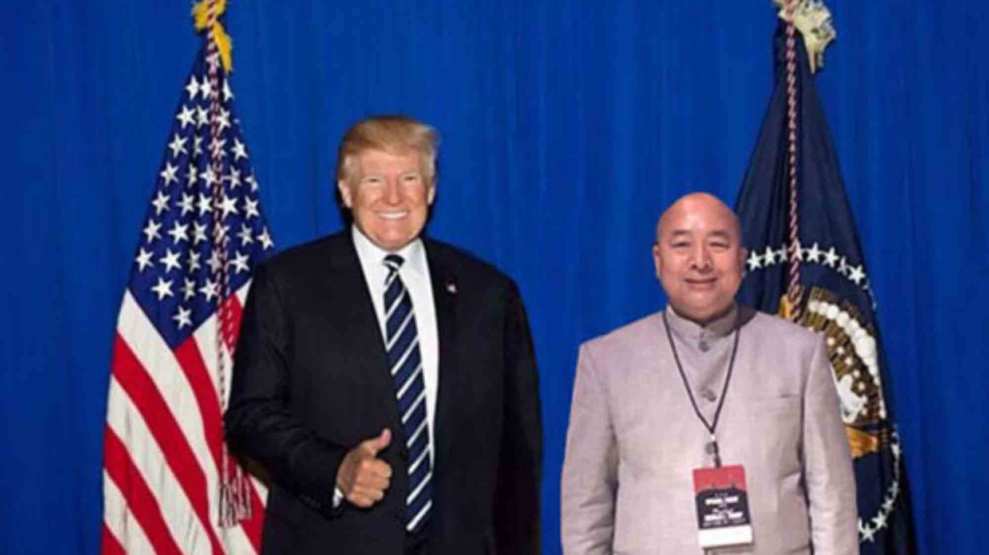 Charles Lee poses with Donald Trump in an undated photo./unfca.org

Where there’s money, access peddling, and foreign nationals—and when the chief executive doesn’t seem to care about this risky mix—there’s an attractive opening for foreign intelligence services. That’s the crux of the matter in President Donald Trump’s latest scandal: the Mar-a-Lago/China affair. And the involvement of one character in this story—a Chinese businessman with ties to the Communist Party and Chinese government outfits—has highlighted the odd interactions at Trump’s private Palm Beach club that have prompted counterintelligence concerns.

This week, the controversy took a true cloak-and-dagger turn when a federal court filing revealed that the Secret Service had arrested a Chinese woman named Yujing Zhang, who on March 30 had allegedly tried to enter Mar-a-Lago. Trump and his family were staying at the resort that weekend, and Zhang was carrying four cell phones, one laptop, an external hard drive, and a thumb drive allegedly containing malware. According to an affidavit filed by a Secret Service agent, Zhang, after first claiming she was at the club to go to the pool (she had no bathing suit), said that she had come to Mar-a-Lago to attend an event held by the “United Nations Chinese American Association” and that she had been sent there by a friend named Charles who had “told her to travel from Shanghai, China, to Palm Beach, Florida, to attend this event and attempt to speak with a member of the President’s family about Chinese and American foreign economic relations.”

This is where it gets interesting. An event had been scheduled at Mar-a-Lago that night that had been promoted by Li “Cindy” Yang, a massage parlor entrepreneur and Trump donor who, as Mother Jones disclosed, also ran a business called GY US Investments, which offered Chinese clients opportunities to “interact with the president, the [American] Minister of Commerce and other political figures” at Mar-a-Lago and elsewhere. (Yang founded the massage parlor where Robert Kraft, the Trump pal who owns the New England Patriots, was busted for allegedly soliciting prostitution; she sold this location to a new owner around 2013.) But the event at Mar-a-Lago that evening had been canceled after Mother Jones and the Miami Herald reported on Yang’s activities.

That Mother Jones reporting included a story noting that Yang was an officer of two groups with ties to China’s Communist Party and government: the Florida branch of the Council for the Promotion of the Peaceful Reunification of China (CPPRC) and the Miami chapter of the American arm of the Chinese Association of Science and Technology. The CPPRC, which calls for the absorption of Taiwan into China, has been described by China experts—including the US-China Economic and Security Review Commission, an organization created by Congress in 2000—as a vehicle for projecting Chinese influence in the West that is closely tied to the Communist Party’s United Front Work Department, which aims to use Chinese people abroad to promote the party’s positions throughout the world.

Last year, the US-China Economic and Security Review Commission reported that China relies on the United Front to “co-opt and neutralize sources of potential opposition to the policies and authority of its ruling Chinese Communist Party.” The panel noted that the United Front’s global influence campaigns are often hard to discern: “It is precisely the nature of United Front work to seek influence through connections that are difficult to publicly prove and to gain influence that is interwoven with sensitive issues such as ethnic, political, and national identity, making those who seek to identify the negative effects of such influence vulnerable to accusations of prejudice.” Testifying before Congress last year, Bill Priestap, who then headed the FBI’s counterintelligence division, said the United Front Work Department is “at the heart of [China’s] influence efforts.”

In a letter last month to FBI Director Christopher Wray, National Director of Intelligence Dan Coats, and Secret Service Director Randolph Alles, several leading House Democrats raised questions about the vetting of visitors to Mar-a-Lago and pointed out that allegations related to Yang raised “serious counterintelligence concerns.” They noted that Yang’s activities “could permit adversary governments or their agents access to…politicians to acquire potential material for blackmail or other even more nefarious purposes.”

Yang said in televised interviews last month that she is not a Chinese spy or an intelligence threat, and she claimed that that she has had no contact with members of the Chinese government since she arrived in the United States in 1999.

Then the story got more curious. The Herald reported that Yang had a connection to an unusual Chinese fellow named Charles Lee, who ran a business bringing Chinese execs to the United States on travel packages that included visits to Mar-a-Lago for events Yang promoted on the GY US Investments website. As the Herald put it, Lee recruited “clients for…events advertised by Yang as opportunities to pay for face time with Donald Trump.” And Lee also ran a group called the United Nations Chinese Friendship Association—a name similar to the one cited by Zhang, the Mar-a-Lago intruder.

So it appeared that Zhang’s presence at Mar-a-Lago was possibly linked to Lee. And Lee, who is based in Beijing, was another puzzling player in this tale. (Yang’s lawyer, Evan Turk, says Yang “has no relationship with” Lee beyond once attending an event with him and appearing twice in pictures with him.)

Lee, whose real name is Li Weitian, established the United Nations Chinese Friendship Association in 2011. According to a press release issued at the time, the UNCFA, which was incorporated in Delaware, was accredited by the UN Economic and Social Council and the Chinese Embassy in New York City. (According to the Washington Post, the UNCFA “is not on any list of nongovernmental organizations with UN affiliation.”) Its mission was to “call on Chinese people all over the world to unite, create a platform for a harmonious Chinese economy” and make “the Chinese brand…world-famous.” A letter the UNCFA apparently sent in 2013 indicated it had a relationship with the Communist Party’s United Front Work Department and other units of the party, as well as with several Chinese government divisions. In a 2017 internet post, the UNCFA said its honorary chairpersons included US representatives Grace Meng (D-NY) and Judy Chu (D-Calif.), and Transportation Secretary Elaine Chao. (The congresswomen have said they have no connection to the organization. A Transportation Department spokesman said Chao “is not associated with this group. It’s unclear why she was listed in the past. She does not know Mr. Lee and doesn’t recall meeting him. She has never dealt with him or this group.”) This 2017 post noted that several prominent Chinese businessmen and diplomats were officers of the group. Lee was listed as executive chairman under the name “Prince Charles.”

After Lee’s name emerged in this scandal, the UNCFA’s website was taken down. But on an archived page, the group offered readers the opportunity to visit Mar-a-Lago and “take a group photo,” presumably with Trump or family members. On a different archived page, the Chinese-language site showed Lee posing with Trump at what seems to be a fundraising event. Another picture had him with Trump’s sister, Elizabeth Trump Grau, at a Mar-a-Lago gala. And another featured him with former UN Secretary General Ban Ki-moon. The site noted that Lee was invited by the “chairman of the US Republican National Committee” to attend a December 12, 2017, Trump campaign fundraiser at Cipriani, the luxury New York City restaurant, where Trump was the speaker. That event was attended by a large number of Chinese-speaking Trump supporters (some of whom were invited there by Yang). An Asian American GOP activist involved with the event recently expressed concern that the fundraiser might have drawn illegal donations from Chinese citizens funneling donations through American straw donors.

Much about Charles Lee does not check out. The Washington Post noted that on his Chinese-language LinkedIn page, Lee claimed to possess or be working toward a “PhD in management from Golden State university,” which is based in Los Angeles. But, the paper reported, the university offers only a master’s degree in Asian medicine and no classes in management. And when the Post sent reporters to visit the Beijing address listed for the United Nations Chinese Friendship Association, they found no such organization there.

Lee seems to be an operator and a mixer, who wants to hobnob with the rich and famous—and who has long-standing ties to Chinese government and Communist Party organizations of concern to counterintelligence experts. His television company worked with China’s state media. His UNCFA has associated with the Communist Party’s United Front. And basic information he has posted about himself and the UNCFA appears to be inaccurate. Yet he has obtained access to Mar-a-Lago and Trump events.

On Wednesday, Rep. Adam Schiff (D-Calif.), the chair of the Intelligence Committee, sent a letter to Wray, Coats, and Alles noting that the UNCFA “has troubling connections to the Chinese government:”

Its Secretary General, Mr. Lee, has apparent connections to the leadership of the Chinese Communist Party’s (CCP’s) United Front Work Department, an organization that President Xi Jinping has called a “magic weapon,” which the CCP uses to co-opt and neutralize opposition to their governing authority and policy priorities. Before the UNCFA’s website was taken down, it featured prominent a picture of Mr. Lee with the Deputy Director of the United Front Work Department.

Schiff posed a host of questions to Wray, Coats, and Alles that essentially added up to this: Have Chinese intelligence officials used Yang, Zhang, Lee, or others to infiltrate Trump’s Mar-a-Lago to conduct influence operations or espionage? And, Schiff asked, has Trump, with his repeated visits to Mar-a-Lago, placed private profit over national security: “What steps is the Trump Organization taking to prevent the collection of classified or sensitive information at the club? How do the imperatives of protecting that information conflict with the revenue raising goals of the private club?”

On Wednesday, the Herald reported that federal authorities are investigating possible Chinese intelligence operations targeting Trump at Mar-a-Lago. For his part, Trump said he was “not concerned at all” about potential Chinese espionage at his club and dismissed the Zhang episode as a “fluke situation.”

Lee, who is now at the center of the Mar-a-Lago/China scandal, remains an intriguing figure. The question is—with Trump offering the Chinese (or other governments) an inviting target at Mar-a-Lago, has “Prince Charles” engaged in any actual intrigue?