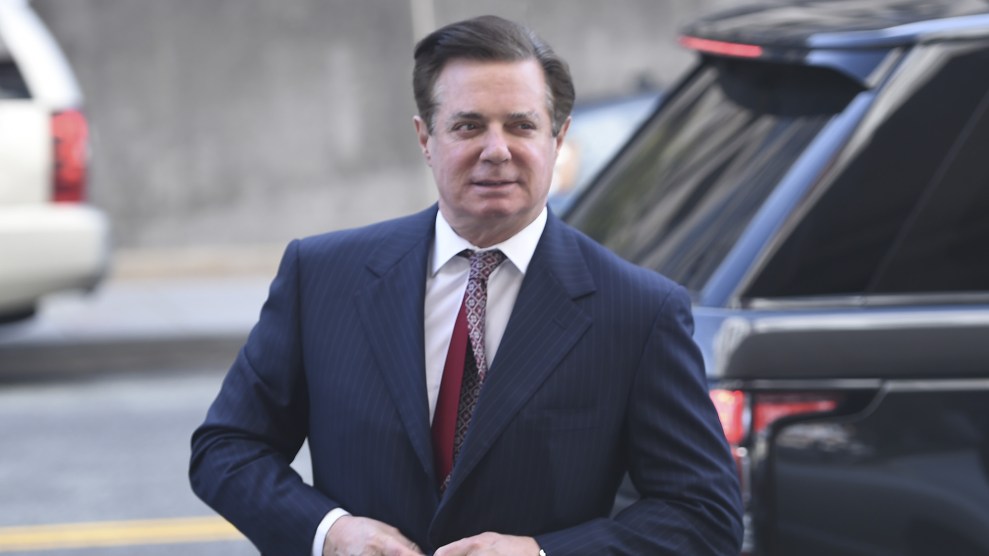 Former Trump campaign chief Paul Manafort held secret meetings with a business associate suspected of having ties to Russian intelligence that involved discussing handing Russia effective control of eastern Ukraine, special counsel Robert Mueller reported on Thursday. Those talks included the possibility of Trump providing a “slight push” to set the plan in motion. While Mueller’s long-awaited report says his office “did not establish” that the Trump campaign coordinated with Russia as the Kremlin worked to interfere in the 2016 presidential election, Manafort’s contacts with his longtime Ukrainian business associate, Konstantin Kilmnik, may come close.

Manafort and Kilimnik met at a Manhattan cigar bar to discuss a so-called “peace plan” for Ukraine.

In August 2016, Manafort met at a Manhattan cigar bar with Kilimink to discuss topics including a so-called “peace plan” for Ukraine that Kilimnik was promoting. Kilimnik had previously worked with Manafort in Ukraine helping then-President Viktor Yanukovych and his political party for about a decade, until Yanukovych’s ouster in a popular uprising in 2014. Manafort maintained ties to the pro-Russian former president, who lives in Moscow, the report stated.

Prosecutors under Mueller noted previously in court proceedings that the FBI believes Kilmnik has active ties to Russian intelligence. Thursday’s revelations added new evidence for that finding, noting that Kilimnik traveled to the United States on a Russian diplomatic passport in 1997 and that Rick Gates, Manafort’s former business partner and a Trump campaign official, told several associates that he believed Kilminik was a “spy.”

Details of that August 2 meeting have emerged through media reports and court proceedings related to Manafort, who is serving a sentence of more than seven years in federal prison after pleading guilty to charges including conspiracy and obstruction of justice. But Mueller’s report offered new details suggesting Manafort’s actions were more significant than previously known. Consider this paragraph, in which Mueller noted that Kilimnik and Manafort discussed the possibility of Trump backing the proposal:

Mueller revealed here that Manafort understood the peace plan pushed by Kilminik to be a “‘backdoor’ means for Russia to gain control of eastern Ukraine” and that Manafort knew that Yanukovych was behind Kilimnik’s effort. The plan would have entailed a referendum in eastern Ukraine intended to allow the region, where pro-Russian sentiment is strong, to vote to gain autonomy within Ukraine. Yankovych hoped to return to head what would be likely have been a newly autonomous, pro-Russian region. Mueller also revealed that Manafort knew of and endorsed Yankovych’s view that a “minor ‘wink'” or “slight push” from Trump would boost the plan.

Manafort told prosecutors that he effectively rejected Kilmink’s plan as unworkable at the August 2 meeting. But the Mueller report made clear that prosecutors don’t buy that. It noted that Manafort, after he was presented with new information, admitted that he discussed the plan at least three more times with Kilminik—in January and February 2017 and even in the spring of 2018, though Manafort by then had been indicted.

Crucially for Trump, Mueller said his investigation “did not uncover evidence of Manafort’s passing along information about Ukrainian peace plans to the candidate or anyone else in the Campaign or the Administration.” But Mueller suggested that his office believed that may be because Manafort lied or hid evidence. The report noted the special counsel could not access all of Manafort’s electronic information. A Mueller prosecutor also noted last year that Manafort used encrypted applications and other elaborate means to hide sensitive communications. Mueller also reported that although Manafort denied speaking to the Trump campaign about the peace plan, he lacks credibility. A federal judge ruled in February that Manafort lied repeatedly to investigators after agreeing to cooperate with Mueller’s probe.

According to the report, Trump—in written answers to Mueller’s questions—asserted that he does not remember Manafort suggesting he take policy positions favorable to Ukraine or Russia.

Additionally, the report stated that Manafort and Gates gave Kilimnik internal campaign polling data with the expectation that Kilimnik would share it with pro-Russian oligarchs in Ukraine and with Oleg Derpipaska, a Russian steel magnate close to Russian President Vladimir Putin who Manafort previously worked for. Mueller said it remains unclear why Manafort shared the polling material.

This portion of the report lays out a significant instance of potential collusion, and Mueller did not reject the possibility that direct conspiring occurred. Rather, he failed to fully unravel the mystery—apparently in part because of a Trump campaign official’s efforts to hinder the investigation. Mueller did not establish that Manafort conspired with Russia, but his findings are far from the exoneration for Trump and his backers claim.