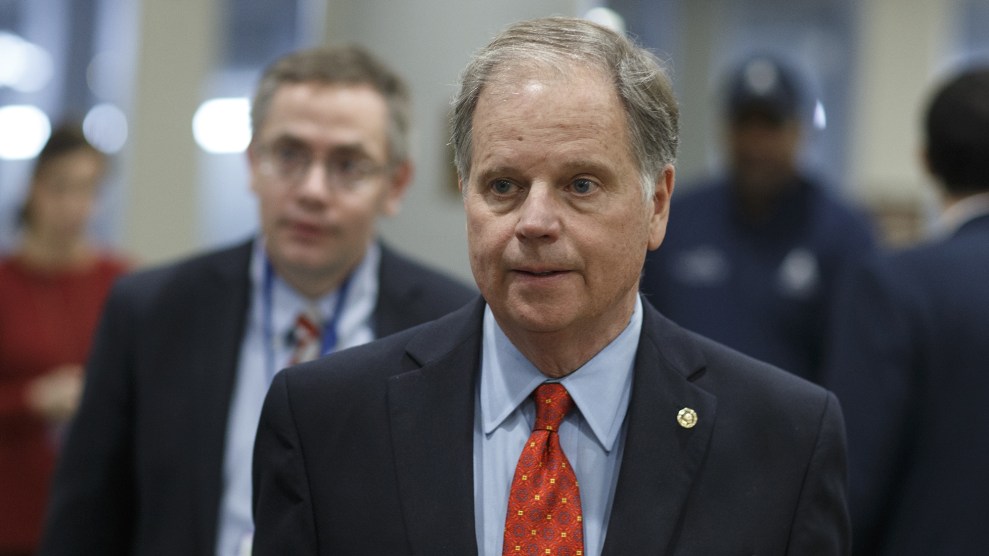 Sen. Doug Jones (D-Ala.) may have known a thing or two about public opinion in his state when he slammed the abortion ban.Alex Edelman/CNP via ZUMA

In 2012, Democrats expanded their majority in the Senate largely because two Republican candidates made comments about abortion and rape that were drastically out of step with the public opinion. In Missouri, Senate nominee Todd Akin claimed that rape doesn’t result in pregnancy because “if it’s a legitimate rape, the female body has ways to try to shut that whole thing down.” A few months later, the GOP nominee in Indiana, Richard Mourdock, described a pregnancy resulting from rape as a “gift from God.”

Akin and Mourdock lost their races in states that Mitt Romney won easily. Their comments not only doomed their own campaigns but became ammunition against every Republican running that year. For Democrats, if anything was a gift from God, it was these two men’s thoughts on abortion.

Today, after Republicans in Alabama passed a ban on abortions even in cases of rape or incest, Democrats have reason to hope that 2012 may be repeating itself.

Now that President Donald Trump has put two justices on the Supreme Court, Republicans and anti-abortion activists face the tantalizing possibility of finally getting the justices to strike down Roe v. Wade, the 1973 case guaranteeing the right to an abortion. If the court doesn’t want to go that far, it could still uphold increasingly onerous limits on abortion, drastically shrinking access to the procedure across much of the country. To this end, Republicans have rushed to pass a number of bills to limit abortions and challenge Roe. On Friday, Missouri lawmakers approved a ban on abortion after a fetal heartbeat is detected, about six weeks into a pregnancy. With the expected signature of the state’s GOP governor, Missouri will be the fifth state to enact such a ban this year. These heartbeat bills, which would ban abortion before most women realize they are pregnant, do not have exceptions for rape and incest.

This week, Alabama took it even a step further. Republicans there passed a draconian abortion ban outlawing all abortions except when the life of the mother is in danger. Again, there are no exceptions for victims of rape or incest.

If Republicans aim to use these bills to attain a victory at the Supreme Court that has eluded them for 45 years, Democrats hope that Alabama’s law will become the next Akin or Mourdock debacle and define the Republican Party in the next election.

“It’s a self-inflicted political pain for Republicans, not just in Alabama but frankly across the country,” says Zac McCrary, a Democratic pollster based in Montgomery, Alabama. Now, he says, Republicans have to be prepared to take a position on the issue of rape and incest exceptions—something they were probably hoping to avoid. Already, we’ve seen Trump and other Republicans in Washington trying to thread that needle, expressing broad support for banning abortions while not backing the Alabama law.

Democrats hope that Alabama’s law will become the next Akin or Mourdock debacle and define the Republican Party in the next election.

The poll, conducted a year ago on behalf of Planned Parenthood Southeast, surveyed 601 likely voters in the 2018 midterms. Even conservative and religious voters supported exceptions for rape and incest. Majorities of voters who identified as Republican, who planned to vote for Republican Gov. Kay Ivey, who identified as evangelicals, and who attended church at least weekly supported exceptions for rape and incest (though the sample sizes are small for these groups, creating a larger margin of error).

After the Alabama law passed, Sen. Doug Jones (D-Ala.) came out in forceful opposition—a striking stance in such a conservative and pro-life state. Jones, who narrowly defeated Republican Roy Moore in a special Senate election in 2017, framed the law as an assault on women and a blight on the state. “The people of Alabama deserve to be on the #rightsideofhistory – not the side of extremists,” he tweeted on Tuesday night.

But McCrary, whose firm conducted the poll, believes the Alabama bill will work to Jones’ political advantage ahead of his 2020 reelection race. “I think that this is an opening for Doug Jones,” says McCrary. “Republicans are now making it more difficult for their candidates to be a normal, mainstream Republican.” Instead, Republicans running in a GOP primary to defeat Jones could face pressure to support the bill in order to win the backing of the party’s right wing. That could make them look extreme to the state’s general electorate. Rep. Bradley Byrne, an Alabama Republican hoping to unseat Jones, is one of the few GOP voices in Washington to speak out in favor of the new Alabama law; most others have shied away from it.

But it’s not just Jones who may benefit, McCrary argues. Every Republican on the national stage will be asked to weigh in on the various abortion bans that don’t include exceptions for rape and incest. That will allow Democrats to discuss the abortion issue on terms where they have an advantage, as they did against Akin and Mourdock.

Democrats running for president are already seizing on this opening. Sen. Kirsten Gillibrand (D-N.Y.) held a rally Thursday inside the Georgia state capitol to protest the flurry of anti-abortion bills. Sen. Bernie Sanders (I-Vt.) is headed to Alabama. “I think it will be front and center on the ballot next year, especially in Alabama,” says Barbara Ann Luttrell, a spokeswoman for Planned Parenthood Southeast. She said her group would begin campaigns of political messaging aimed at local Republican lawmakers in the Southeast, including one that’s already underway in Georgia.

Of course, politics are only half the battle. The Supreme Court is unlikely to rule on Alabama’s law, but it could very well hear a case on one of the other recent laws to reduce access to abortion. When it comes to the Supreme Court, the political views of the country can sway the legal position of the justices. Historically, the Supreme Court is less likely to adopt a policy that most of the country disagrees with, and Chief Justice John Roberts appears concerned with preserving the legitimacy of the court even as he advances conservative causes. As of last summer, support for Roe v. Wade was a record high of 71 percent nationwide. Making abortion a major issue in 2020 might be the best way for Democrats to save it in the courts as well.