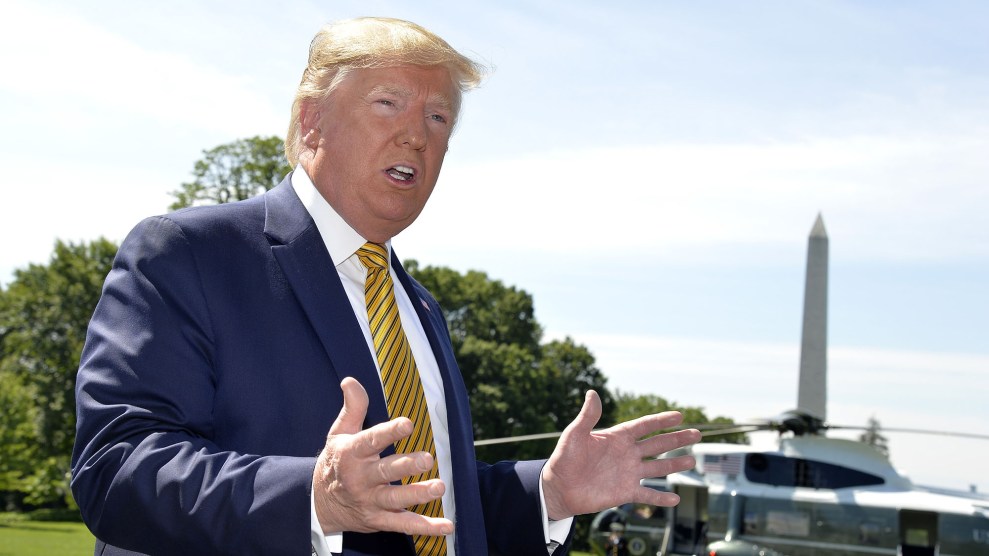 A day after New York magazine published a bombshell story by journalist E. Jean Carroll that detailed when President Donald Trump raped her in the mid-1990s, the husband of one of Trump’s most prominent aides published an op-ed saying that his fellow Republicans should take the rape accusation seriously.

In a Washington Post op-ed, George Conway, the husband of Kellyanne Conway, compared Carroll’s account to the allegations Juanita Broaddrick made that former President Bill Clinton had raped her. Trump invited Broaddrick as his guest to the second presidential debate of the 2016 campaign, and Trump, at the time struggling to respond to the release of the Access Hollywood tape, began referring to Broaddrick on the campaign trail to attack his opponent, Hillary Clinton.

Conway, in his op-ed, says that the Republicans who were concerned about the allegations against Clinton must not dismiss what Carroll wrote. “Trump called Broaddrick ‘courageous,’ and if Broaddrick was courageous, then certainly Carroll is as well,” he writes. “For Carroll’s story is at least as compelling as Broaddrick’s—if not more so.”

Carroll is far from the first person to accuse the president of sexual assault. To date, 22 woman have come forward with accounts of sexual assault or other misconduct. As Conway points out in his op-ed, the Access Hollywood video features the president essentially admitting to the behavior he’s been accused of. “What Trump described on the video is exactly what Carroll says he did to her.”

George Conway, a lawyer with a long record of working in conservative legal circles, hasn’t been shy about criticizing his wife’s employer. He’s called Trump “mentally unwell,” warned that the public should question the president’s “mental stability,” and referred to the Trump administration as a “dumpster fire.” (Trump has responded by labeling Conway a “total loser.”)

But his comparison of Carroll to Broaddrick puts his wife in a more difficult position than normal. Back in the 2016 campaign, Kellyanne Conway went on TV to defend Trump’s decision to revive the Broaddrick’s allegations as part of the presidential campaign. “He believes she deserves to heard and to be believed the way that Hillary Clinton said November of 2015, something I retweeted tonight,” Kellyanne Conway told MSNBC. “She said all sexual assault victims deserve to be heard.”

The president has dismissed Carroll’s story, and on Saturday morning said the situation was similar to Supreme Court Justice Brett Kavanaugh. “People have to be careful because they are playing with very dangerous territory,” Trump said at the White House.

But George Conway’s op-ed later that same day made it clear that at least some Republicans aren’t ready to dismiss the latest allegations against the president. “Republicans or conservatives who promoted Broaddrick’s charges would be hypocritical if they fail to champion Carroll and condemn Trump.”