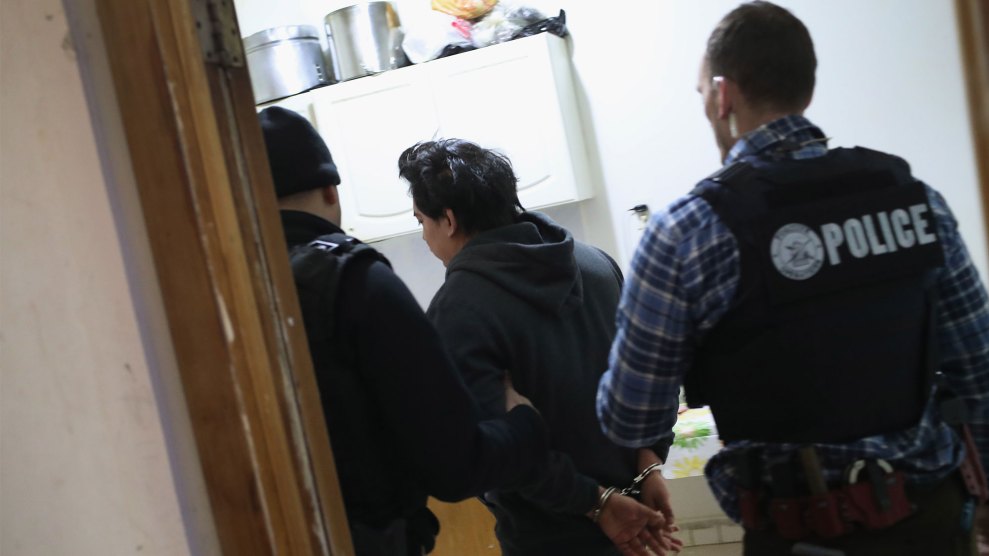 Immigration and Customs Enforcement officers arrest an undocumented Mexican immigrant during a raid in the Bushwick neighborhood of Brooklyn on April 11, 2018.John Moore/Getty

On Monday evening, one day before officially launching his reelection bid, President Donald Trump tweeted that Immigration and Customs Enforcement will soon begin “the process of removing” millions of undocumented immigrants from the country.

Next week ICE will begin the process of removing the millions of illegal aliens who have illicitly found their way into the United States. They will be removed as fast as they come in. Mexico, using their strong immigration laws, is doing a very good job of stopping people…….

That is not going to happen. ICE doesn’t have anywhere near enough resources to make good on Trump’s threat. But the many headlines repeating Trump’s claim may help the administration achieve its actual goal: creating widespread fear among families considering crossing the border and those who have already done so. Here’s what’s actually going on.

Who is ICE targeting?

Trump’s tweet appears to be referring to a planned ICE operation targeting families who have remained in the United States after receiving deportation orders. Politico reports that the arrests would also target people who have turned 18 since arriving at the border as unaccompanied minors.

It is not clear how many people are in that position, but it’s certainly not millions. Immigrants who are still waiting for their court hearings would not be targeted, although some could be arrested if ICE agents come across them while looking for people on their target lists.

The plan has been under consideration for months. In April, Homeland Security Secretary Kirstjen Nielsen and acting ICE Director Ronald Vitiello were pushed out of the Trump administration after blocking a similar operation, citing insufficient preparation and the outrage it would generate. ICE’s new acting director, Mark Morgan, and its deputy director, Matthew Albence, support going after families with deportation orders, as does Stephen Miller, Trump’s most influential immigration adviser.

No. It’s impossible for ICE agents to arrest millions of people next week.

DHS officials have repeatedly talked about how overwhelmed the agency is. The agency has 6,100 deportation officers working under its Enforcement and Removal Operations wing, which is in charge of apprehending and deporting people in violation of immigration laws in the country. ICE also has about 6,000 agents working under its Homeland Security Investigations unit, which handles criminal investigations, including non-immigrant offenders. Even if you combined all ICE enforcement agents and sent them out to arrest people across the country, they couldn’t apprehend and detain millions of people.

ICE’s arrests last fall were 12 percent fewer than during the same period in 2017, and far under the arrest numbers of previous years. As Mother Jones reported, ICE is on track to arrest fewer than 140,000 immigrants this year, compared to the nearly 300,000 in 2011.

ICE has far less capacity to arrest people than it did at the beginning of the Obama administration. Sanctuary cities and counties are no longer sharing arrest information with ICE, forcing agents to find individual immigrants in their communities instead of picking them up at jails. Those operations are far more resource-intensive and reduce ICE’s overall efficiency.

ICE arrests reached a record high at the end of the George W. Bush administration and remained high during Barack Obama’s first term. The increase was driven by the Secure Communities program, which gave ICE officers unprecedented access to information on people local jails were taking into custody—including their immigration status. The spike in arrests led to a backlash, and many jurisdictions took on the “sanctuary cities” mantle and stopped coordinating with ICE, which lost the ability to pick up immigrants and send them to immigration detention when they were released from jail.

Has this been done before?

In January 2016, the Obama administration launched a similar operation that led to the arrests of 121 parents and children across the country. Just as the Trump administration has suggested it will do, Obama’s DHS was targeting families who received deportation orders but remained in the United States. When the upcoming operation was reported in December 2015, it was then-candidate Donald Trump who took credit.

Does everyone see that the Democrats and President Obama are now, because of me, starting to deport people who are here illegally. Politics!

Immigrant advocates strongly opposed the arrests and filed emergency appeals to try to block deportations. Gregory Chen of the American Immigration Lawyers Association captured the prevailing mood among advocates, telling The Atlantic, “They are treating a refugee crisis as an immigration enforcement issue.”

The Obama White House also considered targeting people who had turned 18 and received deportation orders after arriving at the border as unaccompanied children. As Mother Jones reported last year, the plan was never adopted. Thomas Homan, who went on to become Trump’s ICE director, was the proposal’s most vocal opponent. Homan said in a statement last year that he didn’t think those arrests would have been “the best use of our limited resources.”

In recent months, Homan has been using his post as a Fox News contributor to push Trump to target families with deportation orders. Trump announced on Friday that Homan will be his new White House “border czar,” but Homan said over the weekend that he hasn’t accepted the job and that the president’s announcement was “kind of premature.”

Will families be separated again?

Probably, but it’s not a “family separation” policy. Enforcing immigration laws has always meant separating families. Parents, for example, may be deported while their US-born children remain in the country because they are US citizens and therefore not deportable.

The family separation policy that split thousands of families at the border last year was different. It was designed to separate parents from their children by prosecuting parents for the misdemeanor of crossing the border illegally. The goal was to deter other families from trying to cross the border.

ICE agents are shocked that Trump just went ahead and tipped off the entire world to an upcoming law enforcement operation. When Oakland Mayor Libby Schaaf alerted city residents about upcoming ICE arrests last year, Homan was apoplectic. Schaaf, he told the hosts of Fox & Friends, was no better than a “gang lookout.” Now Trump has done the same thing.

From ICE’s perspective, there are two problems with telegraphing arrests. First, ICE agents feel it could put their safety at risk, since people will be expecting them. (No ICE agent has ever been killed by an immigrant during an enforcement operation.) Second, the targets of the operations now have time to hide.

How are immigrant communities reacting?

This may be another empty threat, like Trump’s announcements that he would shut down the border and impose tariffs on Mexican goods. But as in those instances, his tweets spark fear and paranoia that could have real consequences.

“The threats are concerning to us,” says Jenny Villegas of the Central American Resource Center. “Our community is going to be directly impacted. We’re activating our rapid-response and sanctuary networks to ensure our community has all the resources and information necessary to stay safe and protect their rights.”

This type of scare tactic has become more common under this administration. Not long after Trump took office in 2017, reports of ICE agents stopping people at train stations, schools, and courthouses started popping up, and they spread like wildfire on social media. Immigrant communities all over the United States began to panic about a possible mass sweep. Like a game of telephone, the report of one ICE official at a train station turned into fear of riding public transportation in general. That’s how these things tend to work, because the immigrant and asylum communities are already living with uncertainty and fear.

Immigrants are already “terrified about the threats of indiscriminate deportations by this administration,” says Robyn Barnard, attorney with Human Rights First. “Even those who are exercising their legal right to seek asylum express their fear to us regularly due to the hateful rhetoric being spread by administration officials. Such rhetoric only exacerbates the trauma that this population already have experienced that led them to flee their country to seek safety in the United States.”