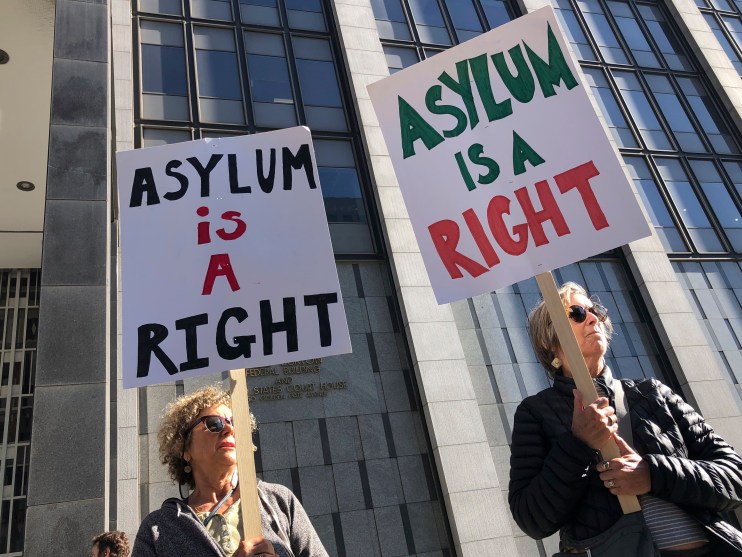 In another rebuke to President Donald Trump’s hardline immigration policies, a federal judge blocked the White House’s most recent asylum ban Wednesday, writing that it is “inconsistent with the existing asylum laws” set by Congress.

On July 15, Trump announced a rule that would deny asylum to migrants who had failed to apply for protection in at least one country they traveled through before arriving at the US-Mexico border. Jon Tigar, a district judge in California who blocked an earlier Trump policy to deny asylum to those crossing the border illegally, ruled that the policy does not clear the bar set by Congress to allow the US to send an asylum seeker to a “safe third country.”

“Congress has ensured that the United States will remove an asylum applicant to a third country only if that country would be safe for the applicant and the country provides equivalent asylum protections to those offered here,” Tigar wrote. “The Rule provides none of these protections.”

Tigar’s decision did not come as a shock to government officials. Mark Morgan, the acting chief of Customs and Border Protection, said last week that the rule was implemented only at two CBP stations in the Rio Grande Valley in Texas and that he expected it to be blocked in court. “We’re actually anticipating the…regulation will be enjoined,” Morgan told NPR two days after the rule went into effect. “And then we’ll have to go from there, as unfortunately, many times, this happens.”

On Wednesday morning, U.S. District Judge Timothy J. Kelly of Washington, DC, upheld Trump’s asylum policy in a similar suit brought by two non-profit immigrants’ rights groups. The groups had argued that they would be “irreparably harmed” by the new rule since it would limit the number of migrants they could serve and were asking Judge Kelly to block the rule while their lawsuit was ongoing. Kelly said the plaintiffs—the Capital Area Immigrants’ Rights Coalition of Washington and the Refugee and Immigrant Center for Education and Legal Services in Texas—did not sufficiently prove that there was a “certain, immediate and great harm” and denied their request to block the asylum measure.

The rule was the latest in a string of moves by the Trump administration to end asylum protections for migrants fleeing violence and persecution in their home countries. The administration’s “Remain in Mexico” program allows the US to send non-Mexican migrants who request asylum back to Mexico until their court date. The federal government has also unsuccessfully sought a formal “safe third country” agreement with Mexico and Guatemala that would effectively outsource part of the US asylum system to those countries.

On Monday, the White House announced a policy shift that would fast-track the deportations of certain newly arrived immigrants. The expansion of expedited removal went into effect Tuesday, allowing immigration officials to quickly detain and deport immigrants who can’t provide proof that they’re in the United States legally and that they’ve been in the country for at least two years.

The case against the federal government was brought by the ACLU, the Southern Poverty Law Center, and the Center for Constitutional Rights. “The court recognized, as it did with the first asylum ban, that the Trump administration was attempting an unlawful end run around asylum protections enacted by Congress,” ACLU attorney Lee Gelernt, who has led several legal battles against the Trump administration’s immigration policies, said in a statement.