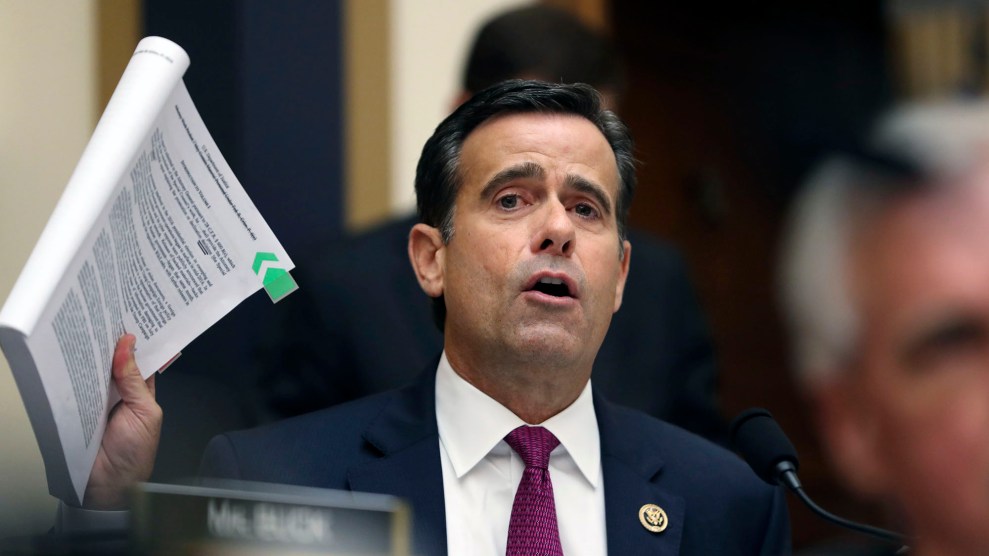 In what can hardly be considered a surprise, Donald Trump has selected as his number-one intelligence official an ardent Trump defender who has little experience in the intelligence field and who misrepresented his role in an important anti-terrorism case. But Rep. John Ratcliffe (R-Texas), who Trump has chosen to be the director of national intelligence, also will be at odds with the intelligence community. Ratcliffe has promoted the view that the FBI, in its investigation of the Trump-Russia scandal, has been a “terror,” and he has fueled the conspiracy theories of the paranoid right that claim a supposed Deep State cabal cooked up the Russia investigation in an effort to keep Trump out of the White House and thwart his presidency.

Ratcliffe has endorsed the notion that there is a “Spygate” scandal and that the FBI went rogue when it kicked off its Trump-Russia investigation.

Ratcliffe has not gone full-Hannity in this regard; he doesn’t rail explicitly against the Deep State as he pushes the Trump line—no collusion and no obstruction of justice! But as a prominent member of the House intelligence committee and a former federal prosecutor, Ratcliffe, via tweets and appearances on Fox News, has tried to give credence to the alternative narrative that the real scandal is not the Russian attack on the 2016 election that was mounted to help Trump, but the FBI’s investigation of all this.

A review of Ratcliffe’s Twitter feed for the last year turned up no posts condemning the Russians, questioning the Trump campaign’s interactions with Russia during the 2016 attack, or criticizing Trump’s refusal to fully acknowledge that Moscow intervened in the election. But there were loads of tweets focused on the favorite (and factually challenged) contention of the right that the intelligence community started the Russia investigation not because it was concerned the Kremlin was trying to subvert an American election but, rather, because it wanted to prevent Trump from becoming president.

For example, in August 2018, Ratcliffe retweeted a tweet promoting a Rudy Giuliani appearance on Fox News in which Trump’s lawyer and media mouthpiece claimed that former FBI director Jim Comey started the Trump-Russia investigation in 2016 in response to the so-called Steele dossier—the collection of memos containing unproven allegations about Trump and Russia that were written by former British intelligence official Christopher Steele for an opposition research company retained by the Democratic National Committee and the Hillary Clinton campaign. And when Ratcliffe recently was a guest on the Fox Business show hosted by Maria Bartiromo, he referred to the Steele dossier as “how all of this started.”

This is the guts of the conspiracy theory hyped by Fox News and other conservative outfits: The Steele dossier, full of unconfirmed and salacious charges, triggered an FBI investigation that spied on Trump and sought to undermine his campaign and then his presidency. And it is bunk. The Trump-Russia investigation, as even the House intelligence committee acknowledged when it was under Republican control, was launched when the FBI learned that a Trump foreign policy adviser named George Papadopoulos had told an Australian diplomat that he had been informed by a contact with Russian ties that Moscow possessed thousands of Clinton emails and could weaponize them against Trump’s foe. Nevertheless, the conspiracy mongers of the right persist, pushing the Steele-started-it-all theory to distract from the Russian attack on the election and Trump’s role in the scandal.

In October, Ratcliffe even claimed the Papadopoulos connection could not account for the initiation of the investigation, stating that Papadopoulos had never visited Russia or met anyone associated with the Russian government.

This makes it very hard to understand why the FBI used him as the basis to launch the highest profile investigation in recent times into the potential collusion by a presidential campaign with the Russian government.

Fact check: false. When Papdopoulos pleaded guilty to charges that he lied to federal investigators, he agreed to a statement of offense that detailed his interactions with Russian intermediaries, including an individual who had “connections to the Russian Ministry of Foreign Affairs” (MFA). In emails to the Trump campaign, Papadopoulos referred to his contacts with “the Russians.” He told the campaign, according to this document, that the “Russian government ha[s] also relayed to me that they are interested in hosting Mr. Trump.” This statement pointed out that during the time Russia was attacking the 2016 election, Papadopoulos was reaching out to the Kremlin on behalf of the Trump campaign: “From mid-June through mid-August 2016, PAPADOPOULOS pursued an ‘off the record’ meeting between one or more Campaign representatives and ‘members of president putin’s office and the mfa.'”

So it’s not hard to see why the FBI might have been worried to learn that a Trump campaign official was seeking to establish a link between the campaign and Moscow while Vladimir Putin was waging a covert crusade to undermine a US election. Yet Ratcliffe has endorsed and promoted the notion that there is a “Spygate” scandal and that the FBI went rogue when it kicked off its Trump-Russia investigation. In February he retweeted a comment from Bartiromo—an enthusiastic booster of Spygate swill—that approvingly cited Rep. Devin Nunes (R-Calif.) asserting that the FBI and Justice Department had caused “terror” with the investigation. That’s a bold charge to level at the bureau, which is part of the intelligence community Ratcliffe will oversee if he is confirmed.

Ratcliffe has also joined the right-wing chorus that claims that one of the most pressing issues is the origins of a warrant sought and obtained by the FBI in October 2016 to mount surveillance on Carter Page, a somewhat pro-Putin foreign policy adviser for Trump who had met with Russian officials in Moscow in July of that year and who had left the Trump campaign in September. The warrant did cite the Steele dossier—which included unsubstantiated allegations that Page was a go-between for a Trump-Kremlin conspiracy—but it did not rely on theses memos and referenced other non-Steele information (including Page’s contacts years earlier with undercover Russian intelligence officers). Yet Ratcliffe, who has often been on Fox News hyping this controversy, and others on the right have made a federal case out of this one warrant, asserting it is evidence of an improper Obama administration effort to spy on Trump. Even if there were problems with the warrant and the use of the Steele memos for this application—and House Democrats have insisted there was no “abuse”—it’s absurd to portray this issue as a scandal that is somehow more pressing than the Russian attack. It’s a diversion.

Moreover, Ratcliffe has echoed all of Trump’s efforts to dismiss the Trump-Russia scandal and denigrate former special counsel Robert Mueller’s investigation. He has bolstered Trump’s baseless claim that Mueller had a bias against Trump because the former FBI director asked Trump to be appointed to head the bureau again and was turned down. (When he recently testified before Congress, Mueller said he had not asked Trump for the position and had met with him only to talk about what Trump should look for in a FBI chief.) And Ratcliffe has claimed that Mueller placed on his investigative team two FBI officials—Peter Strzok and Lisa Page—whose text messages showed they despised Trump. Mueller, though, inherited both of them, and he bounced them from the probe when the texts came out.

The man who would be the nation’s top intelligence chief has also been one of the key proponents of the idea that Trump could not be guilty of obstruction of justice because Mueller in the end did not charge him or his crew with conspiring with the Russians. Yet many legal experts have challenged this argument. After all, a successful obstruction might prevent a prosecutor from being able to proceed with a criminal case.

Now Dems want to "muddy the waters" & go after Barr because they don't want him looking into what prompted the Russia investigation in the first place. pic.twitter.com/gs41pOWOdY

Ultimately, Ratcliffe has adopted Trump’s framework: The only issue in the Russia scandal was whether there was direct collusion between Trump’s gang and Russia, as Moscow waged information warfare against the United States. But the scandal is much wider than that. Trump and his team, as Mueller’s final report noted, denied the attack was real, while encouraging it and seeking to benefit from it. Trump’s top campaign aides interacted with a Russian intermediary in an effort to be part of what they were told was a Russian plot to help Trump. (That’s the infamous Trump Tower meeting that occurred in June 2016.) Trump also brazenly lied about his Russian business dealings—which included contacts between his company and Putin’s office—while he was running for president. None of this is a concern for Ratcliffe.

Those who claimed to have evidence of Trump-Russia collusion helped Putin consume the public discourse for two years in regard to a false story that Mueller’s investigation has completely discredited. There is no evidence of collusion. It’s time to move on. pic.twitter.com/ZyXLNmJOgW

The current director of national intelligence, Dan Coats, has regularly referred to Putin’s attack on the 2016 election and warned that Russia is likely to target the United States again. This appears to have irritated Trump, who has refused to come to terms with the previous assault because it has cast a taint on the election that landed him in the White House. With Ratcliffe, Trump will have a true comrade in charge of the nation’s intelligence apparatus—a man who has parroted both Trump’s claim that there was no Russia scandal and Trump’s alternative-reality fairy tale that he has been the victim of a Deep State plot.

Of course, it is the responsibility of the director of national intelligence to present the president the unvarnished truth, clear and fact-based intelligence that the commander in chief can use to reach informed decisions about vital national security matters. But clearly Trump would rather be handed information that reinforces his biases, impulses, and interests. With his demonstrable ability and willingness to bend the truth for Trump, Ratcliffe is the perfect man for that job.