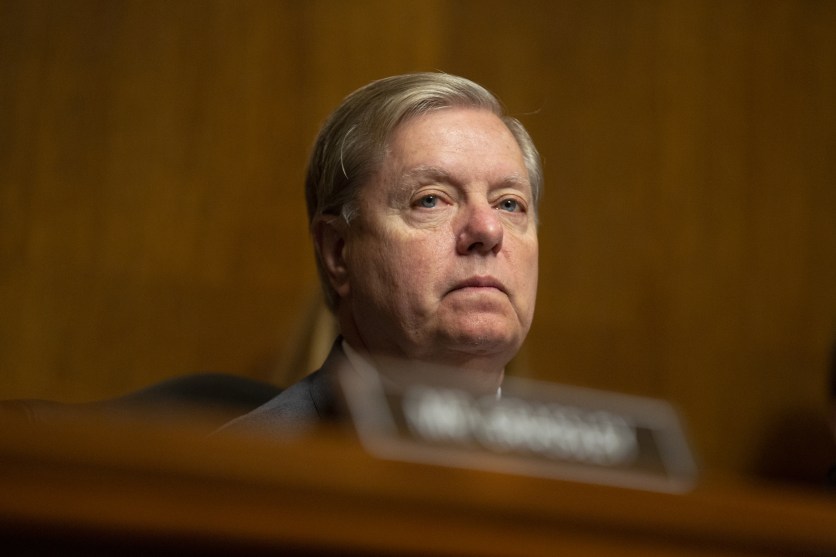 One of President Donald Trump’s most vocal supporters in the Senate has a novel explanation for why his racist attacks against Rep. Ilhan Omar (D-Minn.) were not in fact racist: If she were a Trump supporter, the president wouldn’t want to send her back to Somalia.

Trump first lashed out at Omar and other liberal congresswomen of color in a series of tweets on Sunday telling them to “go back” to the countries they came from. (Of them, Omar, an American citizen, was the only one not born in the United States.) He escalated the conflict at a campaign rally Wednesday night, when he visibly enjoyed a chant of “Send her back! Send her back!” from his supporters.

But on Thursday, when asked by a reporter if Trump’s comments were racist, Sen. Lindsey Graham (R-S.C.) responded, “No, I don’t think it’s racist.”

His reasoning? “A Somali refugee embracing Trump would not have been asked to go back,” Graham said. “If you’re a racist, you want everybody from Somalia to go back cause they’re black or they’re Muslim.”

Graham is the latest in a string of GOP lawmakers to avoid condemning Trump’s repeated targeting of Omar and the other members of a progressive clique of first-term congresswomen: Rashida Tlaib (D-Mich.), Ayanna Pressley (D-Mass.), and Alexandria Ocasio-Cortez (D-N.Y.). On Wednesday, Senate Majority Leader Mitch McConnell—whose wife is a naturalized citizen like Omar—also avoided condemning the president’s racism when asked by a reporter about Trump’s tweets. McConnell simply responded, “The new people who come here have a lot of ambition, a lot of energy, tend to do very well and invigorate our country.”

During debate over a House resolution on Tuesday to condemn the president’s attacks, Rep. Eric Swalwell (D-Calif.) highlighted Trump’s past racist remarks. “Saying immigrants from Mexico are rapists is racist,” he said. “Birtherism is racist.” But before he could continue, a chorus of GOP lawmakers—led by Rep. Doug Collins (R-Ga.)—began making an outcry. “Out of order!” they yelled. Collins then took the lectern and requested that Swalwell’s words “be taken down.”

When pressed by the reporter about Trump’s remarks on Thursday, Graham said, “If you think he’s racist, that’s up to you. “The bottom line is that if you embrace his policies, it doesn’t matter where you come from—he probably likes you.”