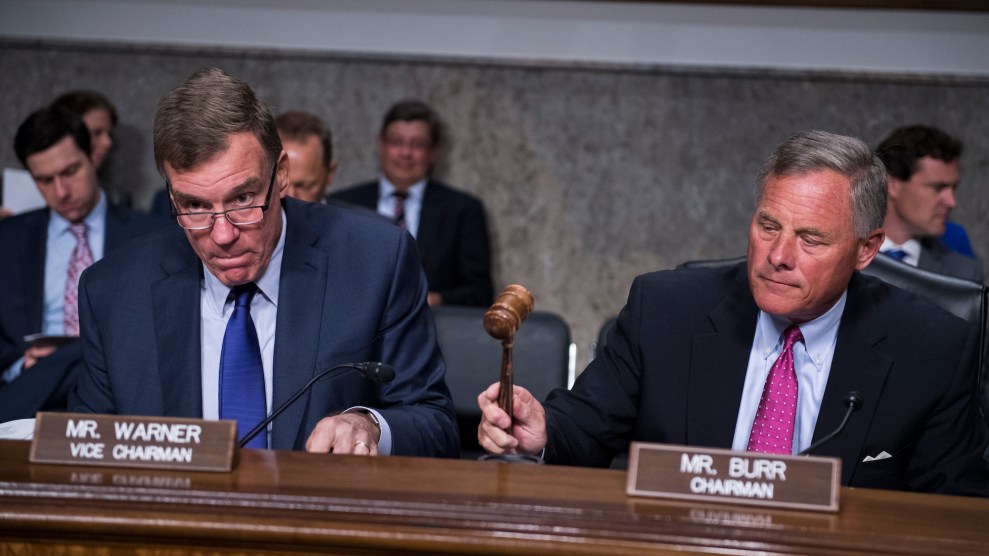 Remember the Senate Intelligence Committee? While Congress focuses on special counsel Robert Mueller’s testimony in the House, it is easy to forget that the longest running investigation into President Donald Trump’s ties to Russia is still chugging along on the other side of Capitol Hill—and it may yet devolve into a partisan fight.

“I am not ready to say we’ve done everything.”

After two and a half years of investigating, the committee is set any day to release a report on the security of state election systems, the first of five reports intended to comprise the committee’s take on the Trump-Russia scandal. Others installments will focus on the Obama administration’s response to Russian intervention in the 2016 election, on the role that social media played in Russian interference, and on the intelligence community’s assessment that Russia tried help Trump win. The final and most fraught piece, which the panel hopes to release by late September, will focus on the Trump campaign’s contacts with Russia.

Committee Chairman Richard Burr (R-N.C.) clearly wants to wrap up the panel’s probe quietly. Burr sought to drain any drama from the committee’s final report months ago, declaring that the committee has found “there was no collusion,” or at least no evidence of it. Burr said last month that the committee had already finished interviewing witnesses. “It’s over,” Burr told reporters in late June.

But committee Democrats say the investigation is not complete, a disagreement that highlights the problem the panel will face as it attempts to reach an agreement on the content of the final report about Trump’s ties to Russia. “I am not ready to say we’ve done everything,” Sen. Angus King, a Maine independent who caucuses with the Democrats, said in an interview last week.

Sen. Mark Warner (Va.), the committee’s top Democrat, said he still hopes to secure testimony from witnesses who cooperated with Mueller’s probe but not with the committee. Those include former Trump national security adviser Michael Flynn and former Trump campaign aide Rick Gates. Warner said he and Burr “are going back and forth” on securing testimony from such witnesses. The committee is also continuing to gather underlying counterintelligence, such as FBI reports on Russia’s interference, that informed Mueller’s findings, Warner said.

King said he still wants to learn more about matters that Mueller’s report left unresolved. This includes figuring out what was in the polling information that Trump campaign chairman Paul Manafort shared with Konstantin Kilimnik, his former business associate in Ukraine. The Mueller report says that Manafort expected Kilimnik, a suspected Russian intelligence asset, would share the material with his former client, Oleg Deripaska, an aluminum magnate close to Russian President Vladimir Putin, and with pro-Russian Ukrainian oligarchs who Manafort previously worked with.

“In my view, there’s a lot of work to do before the Senate Intelligence Committee proclaims mission accomplished on its Russia report,” Sen. Ron Wyden (D-Ore.) said in a statement. Wyden called for “more open hearings on the key issues at play, particularly the counterintelligence questions, so that the public understands what the report is based on.” And he argued that “there is far more work to be done when it comes to investigating follow the money issues,” meaning Trump’s financial ties to Russia.

During the Trump-Russia probe, the committee has largely operated by consensus and has earned plaudits for its status as the only bipartisan investigation into Trump and Russia. But the committee has avoided partisan spats in good part by putting off offering conclusions on contentious matters, such as the Trump campaign’s extensive contacts with Russia and Trump’s discredited denials that Moscow was attacking the election. It will have to tackle those issues to complete its work.

The committee’s investigation has a zombie-like character these days, stumbling on without its original impetus. The probe was launched and sustained by an overlap in the political interests of Senate Republicans and Democrats that may no longer exist. Majority Leader Mitch McConnell (R-Ky.) originally championed the probe as a way to head off calls for a special counsel or an independent, 9/11 Commission-style investigation outside the control of the Trump administration or Congress. That effort failed to stop Mueller’s appointment. But since the special counsel announced that his investigation did not establish a criminal conspiracy between the Trump campaign and Russia, Republicans have touted his report as vindication for Trump. McConnell signaled his disinterest in the intelligence committee’s continued work by ignoring it in a May speech in which he asserted Mueller’s report meant “case closed” on Trump and Russia. Back when Republicans ran both chambers of Congress, Democrats embraced the Senate probe as their only chance to take part in a legitimate investigation of the scandal. But with Democrats now in control of their own investigative committees in the House, they no longer see as much value in the Senate’s work on the matter.

Burr has suggested how the committee might try to avoid fights over the report on Trump campaign contacts with Russian. He told Duke students in April that he hopes to merely “lay out the facts” and presumably avoid wrestling over conclusive claims. But, he noted in the same appearance, “two people can read facts and possibly come to a different conclusion.”