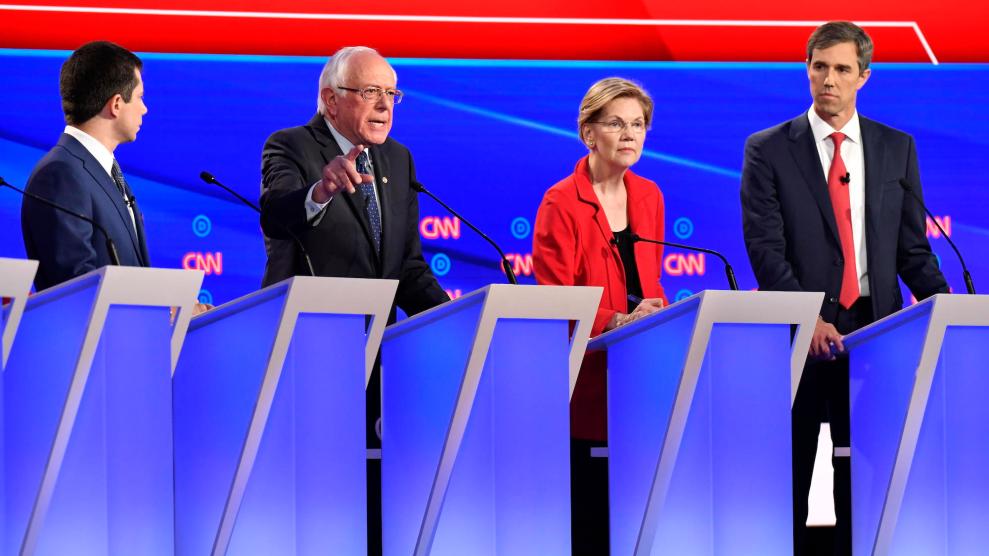 The Democratic candidates sounded the alarm on climate change in the first presidential debates, but the discussion in June was so limited that they never really got into the details of how they’d solve the crisis.

It was a different story this time around. It took more than an hour to get there Tuesday night, but during the 12 minutes of discussion of global warming policy, two of the frontrunners—Elizabeth Warren and Bernie Sanders—became the first candidates to substantively embrace versions of a Green New Deal in the debates. The concept of a Green New Deal—pushed by lawmakers like Alexandria Ocasio-Cortez (D-N.Y.)—has become a favorite idea for progressives. It outlines a vision for economic, infrastructure, and clean energy investment while aggressively ramping down to net-zero emissions as soon as possible.

Elizabeth Warren didn’t actually use the words “Green Neal Deal” or tout AOC’s specific resolution Tuesday night, but she did capture its ethos by touting her plan for investing $2 trillion over 10 years in green manufacturing. “The climate crisis is the existential crisis for our world,” she said. “I have a plan for a green industrial policy that takes advantage of the fact that we do what we do best, and that is innovate and create.” She promised that her plan would produce roughly 1.2 million manufacturing jobs. “This could revitalize huge cities across this country,” she added.

Bernie Sanders also embraced the Green New Deal on stage, albeit briefly. “The Green New Deal is a bold idea,” he said. “We can create millions of good paying jobs. We can rebuild communities in rural America that have been devastated.”

As he often does, Sanders pledged to fight back against the fossil fuel industry, noting that it continues to receive tax breaks and subsidies adding up to hundreds of billions of dollars globally. “I get a little bit tired of Democrats afraid of big ideas. Republicans are not afraid of big ideas,” he said.  “Please don’t tell me that we cannot take on the fossil fuel industry.”

Other candidates on stage were far more critical of Green New Deal policies.

Former Maryland Rep. John Delaney pointed to his plan for a carbon price and investing in technology to capture carbon from the air. But, he argued, a Green New Deal would tie progress on climate to “other things that are completely unrelated to climate like universal health care and guaranteed jobs.” Former Colorado Gov. John Hickenlooper—who has advocated working collaboratively with the oil and gas industry to address climate change—called Green New Deal proposals “a disaster at the ballot box.”

“You might as well FedEx the election to Donald Trump,” Hickenlooper said.

Montana Gov. Steve Bullock expressed doubt that such an ambitious program could make it through Congress. “Let’s not just talk about plans that are written for press releases that will go nowhere else if we can’t even get a Republican to acknowledge that the climate is changing,” he said.

Nearly every Democratic presidential candidate has now released a climate change plan, or at least part of a plan. Climate change has consistently ranked as one of the top concerns among Democratic primary voters—and polls suggest that Trump’s climate denial is deeply unpopular.

The relatively brief segment devoted to climate change Tuesday is unlikely to satisfy environmental activists. They have pressed for an official DNC climate change debate because, they argue, it’s needed to finally allot candidates the time to debate their plans in depth—and to highlight the fact that President Donald Trump has no answers himself.

“Frankly, I don’t think we see an indicator that candidates aren’t willing to talk about solutions,” Greenpeace’s US climate campaigns director Janet Redman told me after the last debate in June. “But I think they need more time to state the case.”