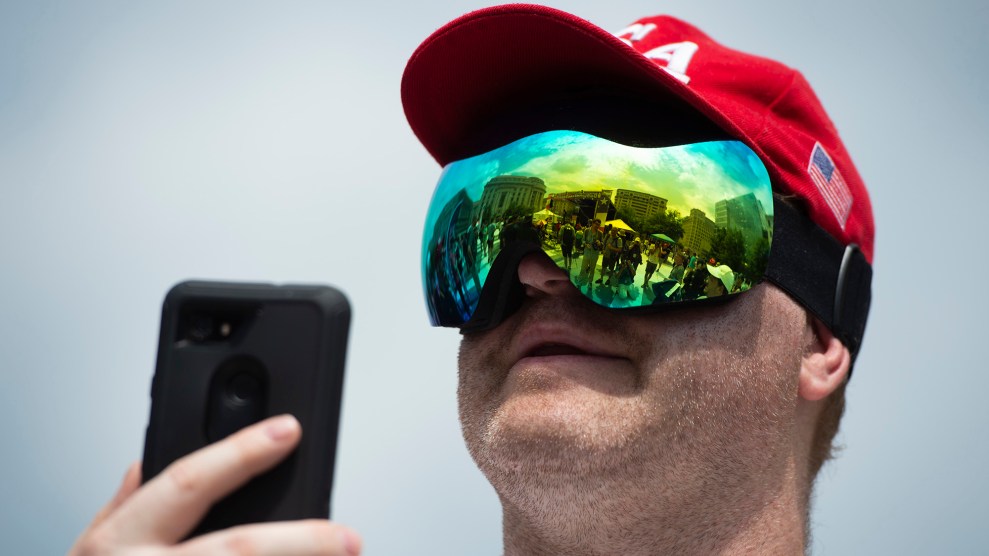 A demonstrator on his phone at the the Alt-Right "Demand Free Speech" rally at Freedom Plaza in Washington, D.C., on July 6, 2019. Andrew Caballero-Reynolds/AFP/Getty Images

Gavin McInnes, founder of the neo-fascist group the Proud Boys, was struggling to break apart toy handcuffs he had brought onstage. He planned to use them as a metaphor for breaking the chains of what he considers to be the rampant stifling of free speech. “Okay, these are a lot stretchier than I thought they would be,” he confessed to the audience at Saturday’s Washington, DC, rally organized by the Proud Boys and the alt-right. He kept spreading the elastic handcuffs, but they wouldn’t break.

McInnes’s botched metaphor took place during a free-speech rally that neo-fascists and members of the alt-right had gathered for at Freedom Plaza, just blocks away from the White House. But maybe his failed handcuff display did turn out to be a metaphor, albeit an unintentional one, for the rest of the generally lackluster event. Organizers had talked a big game before the rally, but it all lost momentum even before the official events began. Big names in the far-right internet community including Pizzagaters Jack Posobiec, Mike Cernovich, and the failed grifter and energetic troll Jacob Wohl, were all scheduled to speak but dropped out. The Proud Boys were also dealing with their own reported internal turmoil in the days before the event.

The speakers who did end up on stage were a collection of less renowned characters, such as YouTuber Joey Salads, whose accomplishments include wearing a Swastika armband to a Trump rally as a part of a “social experiment” and faking another video meant to make Trump opponents look bad, and YouTube “CopperCab,” of Gingers Do Have Souls viral fame, who screamed obscenities at the crowd and shoved the event’s MC and Gavin McInnes as he entered and left the stage.

The topics of the mostly improvised or unpracticed speeches at the rally focused on vague and rambling but impassioned criticisms of the left for systematically undermining the right of free speech. “I may have been the first person in history [to be] completely banned from Tinder,” unironically screamed one of the speakers, who wore a MAGA hat and a suit in the sweltering July heat.

In an apparent effort to ensure that no violence would occur over the holiday weekend, DC police used cop cars, city trucks, and temporary fencing to cordon the rally area and the blocks around it. The roughly 100-200 free speech protesters who showed up filled only a small fraction of the allotted space, and those numbers kept dwindling as the heat and humidity soared during the day. At their demonstration in a separate cordoned-off section across the street, Antifa, a loosely affiliated group of “anti-fascists” who have turned up at rallies across the country to counter the far-right in recent years, and counter protesters appeared to outnumber free-speech rally attendees. A DJ and full band alternated playing music to a small dance party in the counter protest area. Others relaxed in the shade, looking at their phones while speakers’ voices on the PA system at the free-speech rally faintly echoed across the plaza.

“I think it’s important to counter the protest no matter how sad the original protest is, just to show that people care,” said one counter protester named Matt, who didn’t want his last name shared out of professional concerns. “They’re here for show, and I think they know it.”

Last week, a Proud Boys rally in Portland, Oregon, turned violent as the Proud Boys clashed with counter protesters and Antifa, who gave out vegan milkshakes that some people ended up throwing at the Proud Boys. Andy Ngo, a  conservative blogger who was at the rally in Portland, was hospitalized after he was attacked by counter protesters at the event. The Portland police claimed that some of the milkshakes contained quick-drying cement in them, though they never produced evidence of it. Regardless, their misinformation spiraled out of control online and contributed to a heated lead up to Saturday’s rally in DC.

Despite some threats of violence in the days leading up the DC event, aside from a few skirmishes and heated moments, the only clashes between counter protesters and right-wingers were verbal. The fencing constructed by DC police in order to separate the two demonstrations prevented the groups from interacting.

Before the DC rally, some of the Proud Boys spread messages from a supposed member of Antifa who said that they would be attacking right-wingers with acid. Even though these threats never materialized, a lone free speech supporter in a Laura Loomer shirt stood at the back of the rally, with a homemade shield fashioned out of plywood with pantry handles attached to it.

“Some members of Antifa are threatening to throw muriatic acid-filled balloons at us,” he said defiantly. “Just in case they do, this will protect me and others from it.” The shield-wielder never broke his vigilant gaze at the counter protest at least a football field away, separated by two fences and a wall of police officers.