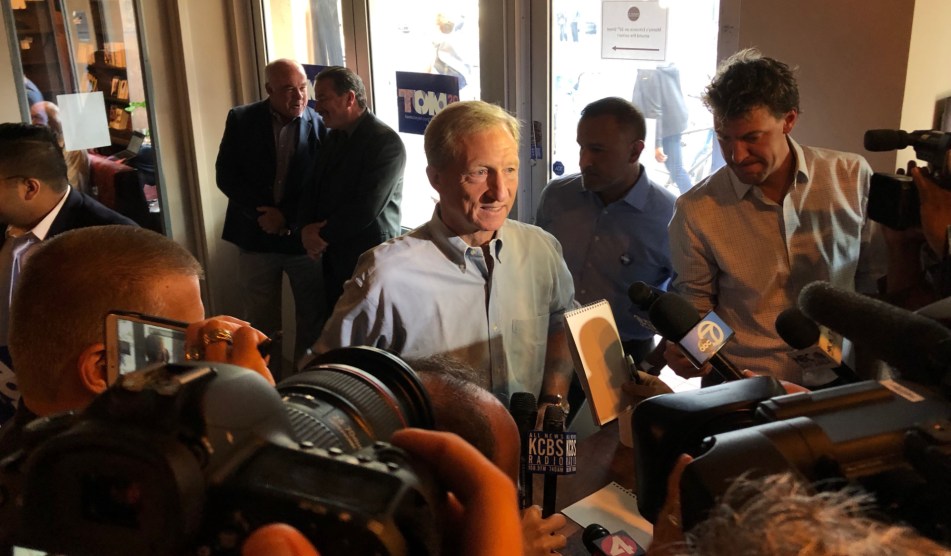 Tom Steyer—hedge fund billionaire, Democratic megadonor, and newly self-proclaimed presidential candidate—is prepared for the question. He’s only 10 days into his campaign, but he knows to expect it. Often, it’s the first question; sometimes it’s a single word.

In January, Steyer said he wasn’t running, but now he is, and so are 20-plus other Democrats. There’s the one focused on climate change, which has been Steyer’s key issue for years; there are a few populists; there are plenty of older white men like Steyer. He could spend the $100 million he has banked for his presidential run on or US Senate races or efforts to prevent President Donald Trump’s reelection in 2020, but, instead, he is using his money for this.

On Wednesday night in San Francisco’s Mission District, he made his hometown debut. “Well, the reason that I’m running is because we have a broken government,” Steyer said to reporters gathered for his event at Manny’s, a restaurant-meets-political-bookstore-meets-civic-space in the Mission District. “Corporate money has bought the democracy. The only solution to that is going to be pushing power back to the people.” He answered a few questions from the attending press, and made his way to a small stage and settling into a chair.

When he was pressed once more about the reason for his candidacy by the moderator, Steyer swiveled in his chair, and he repeated his talking points on the growing threat of climate change, a need to push corporations out of politics, and a lack of willingness among current Democratic candidates to take on Trump directly. “I don’t see anyone else who sees that it’s a very simple fight,” he says of the other candidates.

Well, there is Gov. Jay Inslee, the “climate candidate” who is polling at about 1 percent. When rumors of Steyer’s intention to run began circulating it was connected to unhappiness with those numbers.

Steyer presents himself as a pragmatic fighter—an Inslee who can win.

Which still leaves the issue at hand. “Why am I doing it? Because we have got to take these people on directly,” he continued. “And I believe it’s going to take somebody from the outside who’s been doing it, who’s willing to take them on and can succeed in doing it. And that’s the question—not, ‘what do we want to do?’ but, ‘how are we going to get anything done?'”

But “how?” was not the question that kept rising to the surface in the cafe. It remained, throughout the night, in different forms and in subtle ways, the same: Why is Steyer thrusting himself into the spotlight, rather than simply continuing on as a prominent philanthropist?

Steyer’s biography makes him a bit of a hard sell. He lives in San Francisco’s Sea Cliff neighborhood, where houses are valued at more than $10 million for their views of the Golden Gate Bridge and proximity to China Beach. He studied at Exeter, then Yale, then Stanford, which propelled him to Morgan Stanley, then Goldman Sachs and, finally, a hedge fund of his very own, named Farallon Capital in homage to the islands near the San Francisco coastline that are famous for the sharks that surround them. In 2012, he sold his stake, convinced to put his money toward environmental causes after a hike with writer Bill McKibben. Forbes currently values Steyer at a net worth of $1.6 billion.

Steyer has tried to use his wealth as a talking point. “Everybody always describes me as being rich,” he said wryly. “That isn’t how I see myself. But I can tell you this—the one thing it does give me is the right to say that nobody owns me.” A voiceover in his introductory ad notes his worth in dollars, but only to point out that he’s giving half of the wealth away to “good causes.”

The other half, it seems, is going to politics—causes that happen to bear his name: He’s already reportedly spent $50 million on Need to Impeach, a group he founded that aims to pressure Congressional Democrats to mount a serious impeachment effort. In 2018, NextGen, his cluster of groups trumpeting (mainly) environmental action, received more than $57 million of Steyer’s fortune; and he plans to allocate $100 million to his 2020 campaign bid. (On day one, he dropped a little over a million for an ad.)

That investment may pay off. He has a trove of emails he can put to use because his two groups have vacuumed up information from potential voters, volunteers, and funders. Need to Impeach, as we’ve reported, said it has contact information for 8.2 million people.

He calls this a “grassroots movement.” In the New York Times, Jamelle Bouie saw it differently: “Steyer has no constituency other than himself. He just has money.”

As such, it was hard to find an out-and-out Steyer voter at the event.

A few were campaign staffers and couldn’t talk. One woman told me she was more of a family friend. There were several undecided voters who were curious about his message, but they admitted to being drawn more to candidates like Kamala Harris and Pete Buttigieg. Both were worried about the run complicating his contributions to other Democratic causes. (In 2016, Steyer donated about $100 million in total to candidates, according to Vox.) “He needs to keep that up,” said Jack Haas, 77. “I just wonder does he have the energy and the resources to run for president and do all these other things that are essential?” Tricia Carlin asked. A man next to me, who cheered loudly throughout, I assumed to be an ardent fan, but he just wanted Steyer’s financial support for an app about climate change he was working on.

One can imagine a certain strain when others constantly want your resources but not you.

Steyer has spent years giving. Even before philanthropy, as a hedge-fund manager, that was the job. Steyer’s made a career of seeing worth in others: in their campaigns, in their ideas, in their businesses. As an organizer with more than 10 years of experience, he says, he’s even seen the worth in just people. Now, he wants you to see worth in him. Steyer knows value; he sees it in himself. Don’t you?

For more than an hour, he tried to convince those gathered in the increasingly stuffy coffeehouse. The tables were turned; he was selling, not buying. And yet, in the end, there was the question again. One woman said she appreciated Steyer’s work as a philanthropist for Democratic causes and advocating on climate change. But, still, “why do you think being the President itself would be something that you would be better at?”

“Look,” Steyer began—again. “The reason that I couldn’t stay out of this, [was] because I felt like we really are at a turning point, and this actually is the time for us to change the narrative.

“What we need now is a different narrative about who we are, and what we’re trying to create, and how we’re going to do it. And that is actually the point here. It’s not about this policy nuance or that policy nuance,” he said. “If you look at this society there’s a lot of talk about policy, and there’s a lot of talk about money. You’d think that everything in this society was about money and services. But, really, people have to have a reason to get up in the morning. And an understanding of why their lives make sense. … So when I’m asked about what I’m doing—that’s the point. How are we going to recreate the idea that we have meaning in our lives?”