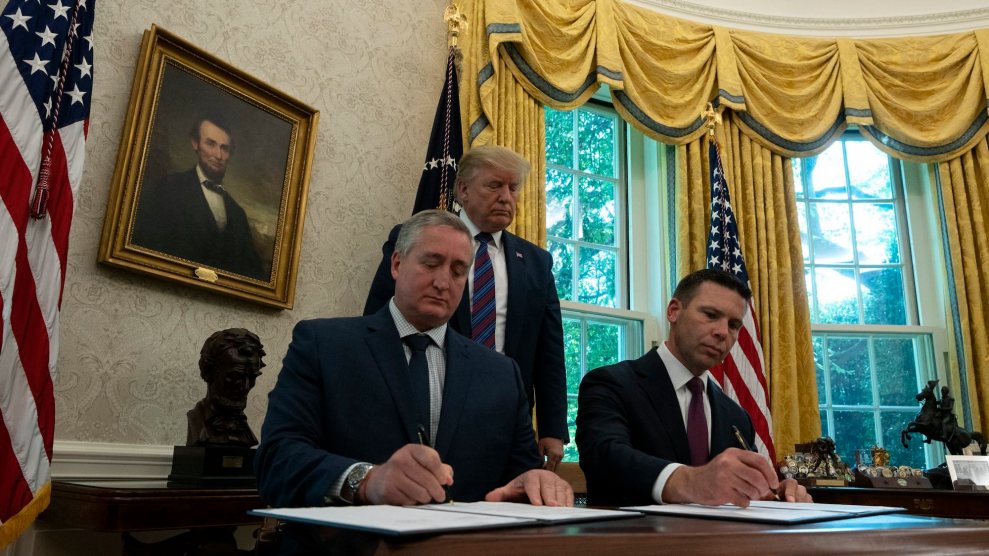 President Donald Trump watches over acting Homeland Security Secretary Kevin McAleenan and Guatemalan Interior Minister Enrique Degenhart on Friday as they sign an agreement that would force many asylum seekers to apply for protection in Guatemala, not the United States. Stefani Reynolds/AP

The United States and Guatemala have reached a deal that has the potential to end most asylum seekers’ ability to seek protection at the US-Mexico border.

Under an agreement announced Friday afternoon, asylum seekers who travel through Guatemala on their way to the United States would be returned to Guatemala and forced to seek protection there. That would largely block Salvadorans and Hondurans from receiving asylum in the United States, as well as large numbers of asylum seekers from around the world who travel by land to the US border after flying to South America. Instead, only Mexicans and Guatemalans would be able to seek protection at the border.

The agreement would not apply to children who arrive at the border alone and would remain in effect for two years, according to a copy released by the Guatemalan government (in Spanish).

Acting Homeland Security Secretary Kevin McAleenan said on a press call that he expects the deal, which is known as a safe third country agreement, to take effect in the next few weeks. Earlier this month, Guatemala’s Constitutional Court blocked President Jimmy Morales from unilaterally signing such an agreement. It is still not clear how Morales’ administrations plans to get around that.

Beyond that it is unclear how Guatemala—which has become the leading sending country of migrants to the United States under Trump—plans to provide refuge for the thousands of asylum seekers who could arrive from El Salvador, Honduras, and elsewhere. As the Washington Post‘s Mexico and Central America bureau chief, Kevin Sieff, pointed out on Twitter, Guatemala doesn’t exactly have much recent experience handling asylum claims.

The deal, if it goes into effect, would be one of Trump’s two most important efforts to undermine the asylum system. The other is the Remain in Mexico program, which is forcing thousands of asylum seekers to wait in Mexico while their asylum claims are pending in US immigration courts. Combined, the two policies could block the vast majority of asylum seekers who come to the southern border from entering the United States. People who fly or travel by sea to the United States would still be eligible to apply for asylum. (The problem for asylum seekers, particularly those who aren’t wealthy, is that it is often impossible to get a visa to fly to the United States, which is why people turn to smugglers instead.)

McAleenan said that by requiring people to apply for asylum in Guatemala, the agreement would “increase the integrity of the [asylum] process, keep vulnerable families that are really economic migrants out of the hands of smugglers, and allow us to reach those with asylum claims more expeditiously.”

Morales was supposed to come to the White House on July 15 to sign a safe third country agreement, but the trip was canceled at the last minute in response to the Constitutional Court decision. Trump responded to the Guatemalan court decision this week by threatening to impose tariffs on Guatemala and ban Guatemalans from entering the United States.

Like Trump, Morales is a former television personality who ran for president in 2015 as a political outsider. Since then, Morales has worked aggressively to undermine a renowned UN-backed anti-corruption commission that has targeted members of his family. His administration also has gone out of its way to please Trump, moving its Israeli embassy to Jerusalem immediately after the United States did. The Trump administration has been largely silent about Morales’ efforts to undermine the rule of law in Guatemala.