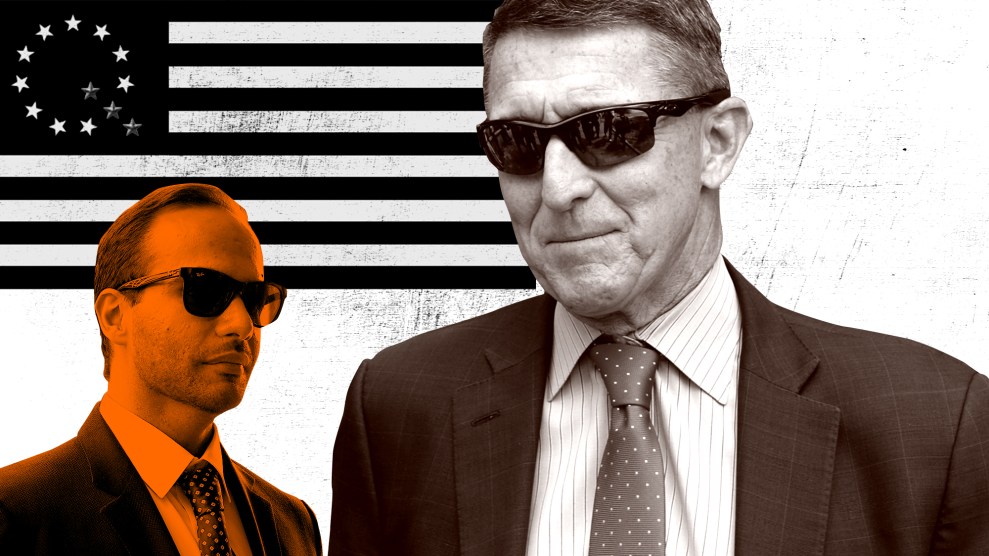 Flynn, a retired Army lieutenant general and former head of the Defense Intelligence Agency, briefly served as President Donald Trump’s national security adviser before he was forced to resign after news reports that he’d misled officials about his private conversations with Russia’s ambassador. He and Papadopoulos are listed as speakers at the upcoming “Digital Soldiers Conference,” a one-day event scheduled for September 14 in Atlanta that promises to ready “[p]atriotic social media warriors” for a coming “digital civil war” against “censorship and suppression.”

Other featured speakers include Bill Mitchell, an online broadcaster and conspiracy theorist; singer and Trump backer Joy Villa; and a “mystery guest.” The event is being organized by Rich Granville, the CEO of Yippy, Inc, who has a Twitter feed littered with references to QAnon, a conspiracy theory centered around the notion that Trump is secretly taking down an international ring of pedophiles that includes high-ranking Democrats. QAnon supporters believe that an anonymous person known as Q is dropping online clues about this supposed clandestine operation. The web page for Granville’s conference prominently features an American flag festooned with a Q.

In an interview, Granville denied that the Q on the flag is a deliberate QAnon reference. He said the stars refer to Flynn’s prior status as a three-star general. “It does look like Q, but there is no reference to QAnon anywhere on that site,” Granville said. He acknowledged that he personally espouses QAnon views. “Do I think it’s good for America? Absolutely,” he said. “Do I think it’s a conspiracy theory? I doubt that.”

“I am with anybody who is with the United States of America, any digital soldier, any patriot, any average American who is doing their part to support the president of the United States,” Granville said.

The site for the event says that a “majority of proceeds” from it—registration prices range from $49 to $2,500 for an “Ultra VIP” pass—will go to Flynn’s defense fund. “General Mike Flynn is a true American hero fighting the deep state who put everything on the line for God and Country,” the site says. Flynn’s lawyer, Sidney Powell, signed off on the event, according to Granville.

Flynn pleaded guilty in December 2017 to lying to FBI agents about his contact during the presidential transition period with Sergey Kislyak, then the Russian ambassador to the United States. Flynn admitted in his plea that he had lied by denying they had discussed sanctions the Obama administration imposed on Russia for interfering in the 2016 election. Flynn also admitted to lying to FBI agents about other transition activities and to lying in Foreign Agent Registration Act (FARA) documents submitted to the Justice Department about his lobbying activities for Turkey while he advised the Trump campaign.

Mueller’s office, citing Flynn’s “substantial cooperation,” recommended last December that he receive a lenient sentence. But in June, Flynn dismissed the attorneys who had negotiated his plea deal. He hired Powell, a Dallas attorney, right-wing pundit, and vocal Mueller critic. Powell quickly began attacking prosecutors; through his new attorney, Flynn claimed he had not lied in his FARA filings, which were submitted by his former lawyers, because he had not read them. That reversal caused prosecutors to dump plans to call Flynn as a star witness in the trial of his former lobbying partner, Bijan Rafiekian. A jury last month nevertheless convicted Rafiekian of illegally lobbying for Turkey.

Flynn’s legal shift has coincided with his apparent move toward conspiracy theorists who have embraced him as a hero. After Flynn’s plea, many conservative writers argued he was unfairly prosecuted and suggested his case would be thrown out. QAnon believers added their own spin, theorizing that Flynn was actually working with Mueller to help defeat the so-called deep state and expose a liberal pedophile ring.

Flynn’s son, Michael Flynn Jr., a frequent purveyor of right-wing conspiracy theories, espoused QAnon views when he tweeted in late 2016 about “PizzaGate,” a conspiracy theory that a DC pizzeria was part of a child sex ring involving senior Democratic officials. Flynn Jr. lost a job on the Trump transition team due to those tweets. Flynn Jr. has since renounced QAnon. But General Flynn’s brother, Joseph Flynn, and sister, Barbara Redgate, have signaled support to QAnon supporters, according to the Daily Beast. Joseph Flynn delighted believers last March by tweeting the letter Q. He later deleted the tweet but suggested his account had been hacked by “the team.” Some QAnon followers interpreted his tweet to be a reference to their theory that a “Q Team” of hackers is working to help Trump.

Flynn and Papadopoulos did not respond to a requests for comment.

Papadopoulos pleaded guilty in 2017 to lying to FBI agents about his contacts with a mysterious Maltese professor and suspected Russian agent named Joseph Mifsud, who disclosed to Papadopoulos that Russian intelligence had “dirt” on Hillary Clinton in the form of thousands of emails. Since serving a 12-day prison sentence late last year, Papadopoulos has encouraged far-right theories that he was targeted as part of a plot by the intelligence community to entrap the Trump campaign. With little evidence, Papadopoulos argues that Mifsud was a Western intelligence agent dispatched as part of a shadowy effort to smear Trump.

Papadouplous has also seemed to flirt with the QAnon world before. In February, he tweeted “Trust the plan,” a stock QAnon phrase, which many in the QAnon community interpreted as an endorsement of their beliefs. (Papadopoulos told the Washington Post Magazine in May that the tweet was a reference to Drake’s song “God’s Plan.”) Granville said Papadopoulos will receive a “small” speaking fee for the September event but declined to specify the amount.

Scores of QAnon fans have shown up to Trump rallies en masse to show support for the president, who they believe is working to quash the deep state and end an elite liberal child exploitation ring, and a recent Trump campaign ad contained footage of QAnon signs at one such event.

Trump administration officials have so far stayed away from saying anything publicly about the conspiracy. One exception is Anthony Scaramucci, briefly the White House communications director, who fanned the flames of the conspiracy theory at the 2018 Conservative Political Action Conference. QAnon has “been dead accurate about so many things,” Scaramucci said. “When you find out who he is, you’re not going to believe it.”

Trump himself has also arguably encouraged his QAnon fans. While never directly addressing the conspiracy theory, he has retweeted QAnon conspiracists. He even invited one QAnon believer to the White House.