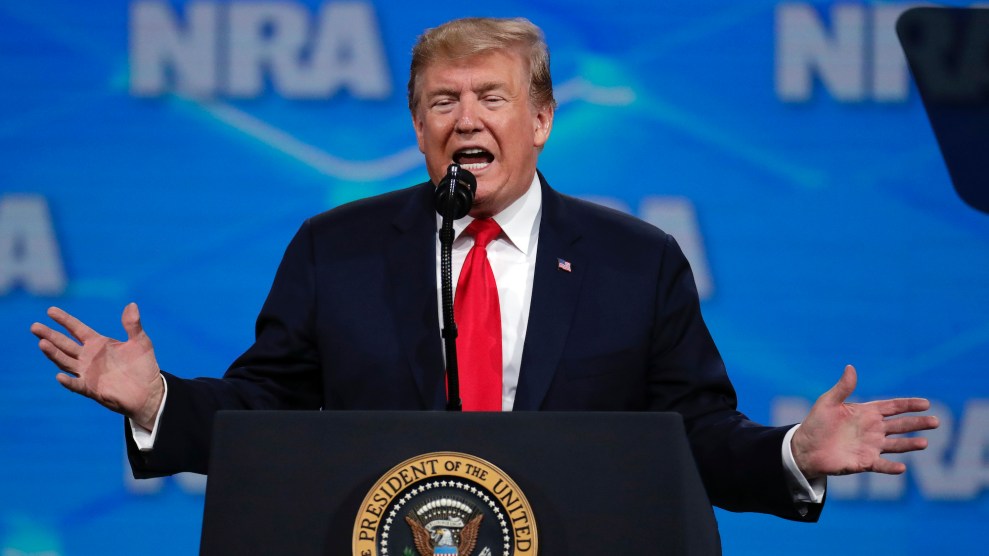 After mass shootings left 31 people dead in El Paso and Dayton, President Donald Trump signaled a willingness to pursue significant new gun control legislation—in particular, by strengthening the federal background check system. Currently, gun-buyers are required to pass a background check if they purchase a weapon from a licensed dealer, but not if they buy from a private seller online or at a gun show. It’s a massive loophole that makes it easier for ex-convicts and other dangerous individuals to illegally acquire firearms.

“There’s no one policy that’s going to stop any shooting—it takes a multitude of solutions.”

“Republicans and Democrats must come together and get strong background checks,” Trump tweeted on August 5. Later that week, he assured Americans that “serious discussions” were underway with the House and Senate to make that a reality. But on Tuesday, a number of outlets reported that Trump, after consulting with National Rifle Association president Wayne LaPierre and other gun rights advocates, had taken universal background checks off the table. The background check bill that House Democrats passed in February is now likely dead in the GOP-controlled Senate.

It’s a song we’ve heard the president sing before. In the aftermath of the Parkland massacre last year, the White House held a roundtable on school safety. “Background checks a big part of conversation,” Trump tweeted after the gathering. He affirmed that position two weeks later, writing on March 12, 2018, “Very strong improvement and strengthening of background checks will be fully backed by White House. Legislation moving forward.” But the only bill Trump and congressional Republicans ended up supporting was the bipartisan Fix NICS Act, a measure intended to shore-up the existing background check system by penalizing government agencies and the military for not submitting their internal records to the federal database. It did nothing to close the loophole allowing an estimated 22 percent of gun purchases to avoid a background check altogether.

GOP resistance on the issue flies in the face of overwhelming public opinion. An NBC News/Wall Street Journal survey conducted last week found that nearly 90 percent of Americans support expanded background checks. So what pushed Trump away from them? According to reporting from the Atlantic, NRA officials walked Trump through nearly 40 mass shootings, all of which involved a gunman who got ahold of weapons legally. “Once he understood” that universal background checks wouldn’t have stopped those tragedies, “the temperature changed,” said an unnamed former White House official cited in the piece.

That claim isn’t exactly wrong, but it largely misses the point. It’s true that many of the highest-profile mass shootings in recent years were committed by gunmen who obtained their weapons legally—including the El Paso and Dayton massacres; the 2012 massacres in Aurora, Colorado, and Newtown, Connecticut; and the 2017 massacre Las Vegas, which was the deadliest in US history. According to Mother Jones’ database, at least 80 percent of mass shootings—defined as incidents in which four or more people were killed by a firearm—have involved legally obtained weapons. A 2018 analysis of mass shootings from Everytown for Gun Safety puts that figure closer to two-thirds.

But to give into that logic plays into the NRA’s hands, says Robin Lloyd, the managing director of Giffords, the gun reform organization co-founded by Gabrielle Giffords, the former Arizona congresswoman and mass shooting survivor. “We know the NRA playbook at this moment,” Lloyd says. “They automatically say ‘That wouldn’t have mattered in this case.’”

For their part, gun control activists have learned that it’s better to steer clear of the debate over what caused a particularly horrific shooting, explains Brian Malte, who was a senior official at the Brady Campaign to Prevent Gun Violence—now known as Brady United—in the aftermath of the Newtown massacre.

“We used to fall into this trap as advocates when reporters would ask, ‘What would have stopped this shooting?’” says Malte. “We’d be trying our very best to say, ‘This policy would have.’ And that was the wrong answer because it’s not true. There’s no one policy that’s going to stop any shooting—it takes a multitude of solutions. Many times our movement would play into the NRA’s defeatist…attitude.”

These days, Malte says, activists try to remain focused on the more than 30,000 people who lose their lives to guns each year—the vast majority of whom never make national news. And when public outrage peaks in the wake of a mass shooting, theses activists devote much of their energy to advocating for the policy that experts say would be the most effective measure the government could take to reduce overall gun deaths: universal background checks.

It didn’t used to be that way. The strategy dates back to the January 2011 shooting in Tuscon, Arizona, that killed six people and injured 13, including Giffords. The gunman used a semi-automatic pistol, obtained legally, with a high-capacity magazine that allowed him to rapidly fire without stopping to reload.

Public outrage was high, but gun control groups were divided over how to respond. “There was this split in the movement among national gun violence prevention groups about whether we should focus on high-capacity ammunition magazines and assault weapons, or background checks,” Malte says. “It was really tearing our movement apart.” Over the next several years, some groups, like Brady, pushed on the high-capacity magazines front. Mayors Against Illegal Guns—the Michael Bloomberg-founded group now known as Everytown—pushed for background checks.

Then Newtown happened: A gunman slaughtered 20 children at Sandy Hook Elementary School. Nancy Pelosi, then the House minority leader, began holding weekly phone calls with gun violence prevention organizations, a signal to activists that she would begin pushing hard on an issue that had long been seen as a third rail by many of her Democratic colleagues. “At that point, we knew we couldn’t keep switching federal legislative priorities, or we’re never going to gain traction,” Malte says. “So there was broad consensus among the major gun violence prevention organizations: We’re not going to repeat the mistake.”

The particulars of that shooting, which included the use of an AR-15 and high-capacity magazines, would be set aside. “We needed to stick to building consensus around a piece of legislation, regardless of what people think about it in that moment, because it’s not just about that shooting, right?” Malte says. “It’s about what’s best from a more public health-driven, data-driven approach.”

Indeed, nearly two-thirds of deadly shootings are carried out using handguns rather than the assault rifles often employed in higher-profile—but relatively uncommon—mass shootings. There isn’t much data on exactly how many murders have been carried out with an illegally possessed firearm, but a 2016 analysis from the University of Pittsburgh determined that roughly 80 percent of gun-related crimes were perpetrated by someone in illegal possession of the firearm used in that crime. In other words, requiring background checks for all gun purchases would make a number of those crimes more difficult to commit.

Part of that consensus was also the maturity of the movement, says Christian Heyne, who now serves as Brady’s vice president of policy and worked with the Coalition to Stop Gun Violence at the time of the Sandy Hook shooting. “By virtue of all of that new interest [sparked after Sandy Hook], that’s when we really sat down and began talking to one another,” he recalls. “That’s when we had the conversation about what the systematic loopholes looked like.”

Since then, Democrats have largely aligned themselves with that approach. But Republican opponents of gun control haven’t cooperated, blocking every attempt to expand federal background checks and often justifying their obstructionism by noting that such legislation wouldn’t have stopped a specific sensational crime. “Expanded background checks would not have prevented Newtown,” Sen. Chuck Grassley (R-Iowa) said during debate on the issue in 2013. (The shooter had obtained the firearms he used through his mother.)

Rep. Jamie Raskin (D-Md.), a member of the House Judiciary committee who has worked extensively on gun reform, likens the GOP’s use of NRA talking points to a “three-card Monte Carlo operation.”