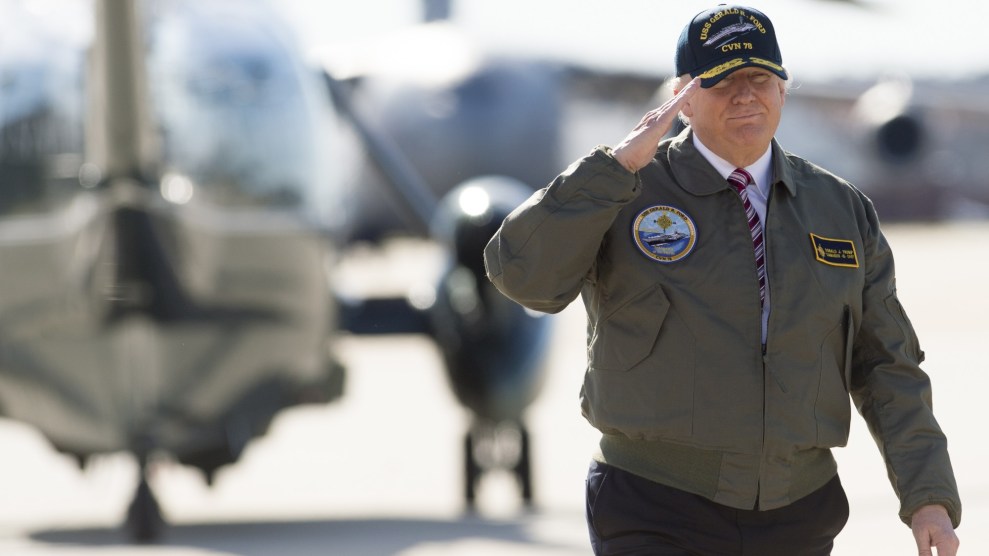 President Donald Trump walks to Air Force One prior to departing from Langley Air Force Base in Virginia on March 2, 2017.Saul Loeb/AFP/Getty

With John Bolton out as national security adviser, the defense industry is poised to receive even more representation in the highest levels of President Donald Trump’s foreign policy team. Bolton deputy Charlie Kupperman—a former executive at Boeing and Lockheed Martin—was tapped to fill the job in an acting capacity, giving industry veterans another prominent perch in the administration. Ex-Raytheon lobbyist Mark Esper already serves as Secretary of Defense.

While in office, Trump has become a major booster for American defense contractors. He’s urged Vietnamese leaders to buy “the best military equipment in the world by far” from American firms and has even promoted specific companies, such as Lockheed Martin, from the White House’s official Twitter feed. When Saudi Arabia, a longtime US ally, drew international condemnation for its role in ordering the death of a Washington Post journalist, Trump appeared to excuse the kingdom’s behavior due, in part, to the “record amount of money” it had spent on “military equipment from Boeing, Lockheed Martin, Raytheon and many other great US defense contractors.”

That unwavering support for the defense industry is reflected in the makeup of Trump’s advisory team.

Kupperman worked in space operations at Lockheed and as a missile defense executive at Boeing after holding several positions in the Reagan administration. He joined Bolton’s staff in January as deputy national security adviser, replacing another former Boeing executive, Mira Ricardel.

Esper, who originally served as Army secretary, lobbied on behalf of the Aerospace Industries Association of America and US Chamber of Commerce before spending seven years at Raytheon. He succeeded acting Defense Secretary Patrick Shanahan, who entered government service for the first time in July 2017 following more than three decades at Boeing.

Even James Mattis, Trump’s first Defense Secretary, has ties to the defense industry. Following his retirement from the Marine Corps, Mattis joined the board of General Dynamics, and upon his exit from Trump’s Cabinet, he re-joined the board.

Kupperman might not be long for the job, given his ties to Bolton and the uncertain circumstances surrounding Bolton’s departure. Trump said on Twitter that he “asked John for his resignation, which was given to me this morning.” Bolton disputed that sequence of events in his own tweet, which said, “I offered to resign last night and President Trump said, ‘Let’s talk about it tomorrow.'”

The position of national security adviser does not require Senate confirmation, which offers Trump greater flexibility in selecting someone more aligned with his views. Bolton, who has argued in favor of preemptively bombing North Korea and Iran, privately opposed Trump’s preference to meet with the leaders of those countries and, when Trump met in July with Kim Jong Un, Bolton was on a pre-scheduled trip to Mongolia. More recently, Trump sidelined Bolton during talks between American officials and the Taliban, sparking reports that Bolton’s seventeen-month White House tenure could be at an end.