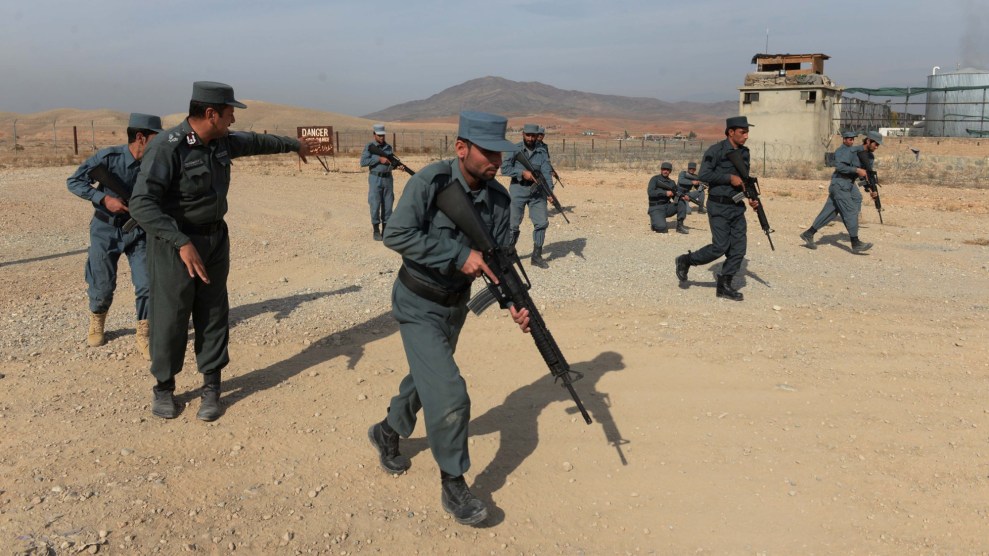 Afghan policemen display their skills at a police training center on the outskirts of Jalalabad in Nangarhar province.Noorullah Shirzada/AFP/Getty

This week brought more grim news from the US war in Afghanistan, which is now in its 19th year.

The United Nations reported a 42 percent increase in civilian deaths in July-September compared to the same period in 2018. The NATO-led military coalition, which generally underestimates civilian harm relative to the UN, found a nearly-identical 39-percent increase for June-September. This stretch, documented in a filing published Wednesday by the special inspector general for Afghanistan reconstruction, covers key events such as the Afghan presidential election and the breakdown of peace negotiations between the Taliban and the United States. During that time, several horrific attacks linked to the Taliban and ISIS’ Afghan offshoot took place at weddings, mosques, and other public venues.

“It’s not like there’s a well-thought-out strategy that’s simply being enacted as we go along.”

The United States and its allies are hardly free from responsibility for the carnage. In July, a UN report said American-led forces and Afghan security officials were responsible for a majority of the civilian deaths in the country during the first six months of the year. On Thursday, Human Rights Watch unveiled evidence of atrocities by fighters aligned with the CIA, which has been training Afghan paramilitary units to fight terrorists for nearly two decades. The report identified 14 cases over the past two years in which “CIA-backed Afghan strike forces committed serious abuses, some amounting to war crimes.”

The intelligence community does not reveal the location or result of most of its raids, but reporting by HRW and news outlets like the Intercept have shed light on the gross overreach of CIA-backed operations. At a national security forum in October 2017, then-CIA director Mike Pompeo said that with President Donald Trump’s support, he and the agency’s leaders “were taking several steps to make CIA faster and more aggressive.” It quickly became clear what he meant. A New York Times story later that month reported that the CIA was “expanding its covert operations in Afghanistan” by sending agency personnel and contractors to help Afghan forces “hunt and kill Taliban militants across the country.”

A CIA spokesman told Reuters that the agency conducts its operations “in accordance with law and under a robust system of oversight.” But for months, the UN has flagged dangerous excesses by these CIA-backed groups. In its 2018 annual report, the UN Assistance Mission in Afghanistan warned of there being “no legal basis for the existence of the Khost Protection Force,” one such unit, adding that “Afghan authorities have not taken the necessary action to hold members of this group accountable with respect to allegations of excessive use of force, intentional killings, and other abuses that severely impact the human rights and the lives of Afghans.”

More troubling news arrived on Tuesday with the publication of a memoir by Guy Snodgrass, former aide to ex-Defense Secretary James Mattis. During an overseas trip with Mattis to the Middle East, Snodgrass writes, he was ordered to redo the Trump administration’s Afghanistan strategy “in one day” after a first draft from the Pentagon’s policy shop proved unsatisfactory. Despite not having participated in “any rollout or strategy planning meetings,” Snodgrass states that he completed the task. Given the time constraints, he says he was forced to bypass the policy office, which was responsible for crafting the strategy in the first place.

None of this happens in a vacuum. As Snodgrass told me in an interview earlier this week, a “chaotic administration” produces an “incredibly dangerous” environment for national security policymaking.

“It’s not like there’s a well-thought-out strategy that’s simply being enacted as we go along,” he said.