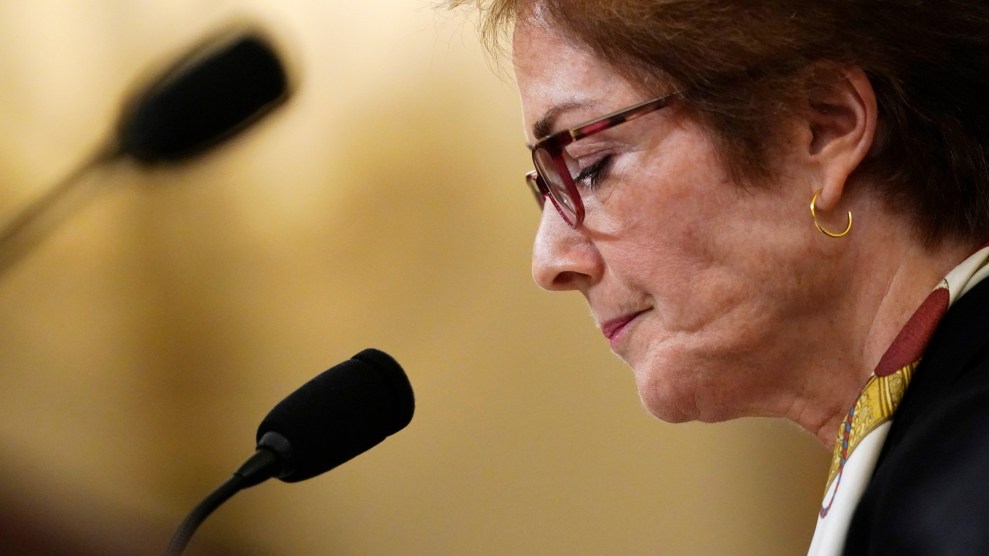 When Mike Pompeo took over as secretary of state last year, he inherited a slimmed-down workforce still reeling from the impact of a 16-month hiring freeze. In his first address to State Department employees, he vowed to restore their “swagger” and rebuild the department’s flagging role in Donald Trump’s administration.

On Friday, roughly 16 months after Pompeo’s first day at State, former US Ambassador to Ukraine Marie Yovanovitch gave House impeachment investigators a far different portrait of his leadership. Far from “swaggering,” US diplomats had been subjected to smear campaigns, co-signed by Trump, “from individuals with questionable motives.”

If anyone has the authority to speak about smear campaigns, it’s Yovanovitch. A Foreign Service Officer with more than three decades of experience in government, she was abruptly ousted from her post in Kyiv after pushing an anti-corruption effort—in line with stated US policy at the time—that made her a target of Rudy Giuliani, Trump’s personal lawyer, who convinced the president that she was disloyal. The campaign of disinformation is in line with several instances of Trump’s cronies, in cahoots with corrupt foreign oligarchs, pushing discredited attacks against career US officials, especially those with experience during the Obama administration. The smears frequently center around liberal billionaire George Soros, who Giuliani and his allies portray—with all the relevant anti-Semitic innuendo—as a puppet master controlling US diplomats and intelligence operatives.

In her testimony opening remarks, Yovanovitch detailed the impact of that right-wing conspiracy feedback loop on not just her, but the State Department writ large:

The attacks are leading to a crisis in the State Department as the policy process is visibly unravelling, leadership vacancies go unfilled, and senior and midlevel officers ponder an uncertain future and head for the doors. The crisis has moved from the impact on individuals to an impact on the institution. The State Department is being hollowed out from within at a competitive and complex time on the world stage. This is not a time to undercut our diplomats.

It’s a familiar, if dispiriting comment on Trump’s treatment of the State Department—and Pompeo’s complicity in the attacks on career bureaucrats within it. Since his election, Trump has appointed more inexperienced ambassadors than any president since World War II, leading to roughly 40 percent of ambassadors coming from outside the Foreign Service, the corps of highly-trained diplomatic professionals meant to serve apolitically across administrations, a sharp increase from 30 percent under Obama. Among the least qualified of Trump’s handpicked diplomats is as ambassador to the European Union Gordon Sondland. As I wrote this week, while career professionals like Yovanovitch were being pushed aside, Trump tasked personal cronies like Giuliani and Sondland, whose official portfolio does not include Ukraine, to pressure the Eastern European country’s leaders to investigate Trump’s political rivals.

The State Department’s rot goes far beyond Trump though. As Yovanovitch made clear in her testimony, senior department officials abandoned her even as no credible evidence emerged to even partially validate the accusations leveled against her. John Sullivan, then Pompeo’s No. 2, told lawmakers last month that he never sought to confirm the allegations of disloyalty against Yovanovitch or give credence to them. He acknowledged that she served “capably and admirably.” Michael McKinley, a former senior adviser to Pompeo, told House investigators in a private deposition last month that he spoke three separate times with Pompeo about issuing a statement in support of Yovanovitch, but the secretary “did not respond at all.”

“What I was told is that there was concern that the rug would be pulled out from underneath the State Department if they put out something publicly,” Yovanovitch said in her own closed-door testimony to House investigators last month. “You know, that perhaps there would be a tweet of disagreement or something else.” As a member of Congress before joining the Trump administration, Pompeo was one of the most vocal critics of Hillary Clinton’s handling of the attack on US diplomats in Benghazi, pushing several conspiracy theories and hammering the Obama administration for not providing relevant documents to Congress. Now overseeing the department he once pilloried, Pompeo has become, as Obi-Wan Kenobi, might say, the very thing he swore to destroy.

Assessing her own experience in the spotlight, Yovanovitch on Friday described a “hollowing out” of the State Department. Career ambassadors, scared off by Trump or unwilling to serve for a secretary who won’t protect them, have retired in droves. As if to prove her point, less than an hour into the public hearing Friday morning, Trump tweeted a series of attacks against Yovanovitch, writing, “Everywhere Marie Yovanovitch went turned bad.” When Rep. Adam Schiff (D-Calif.), chair of the House Intelligence Committee, asked her to respond to the tweets Yovanovitch’s pained expression evinced an inability, at this point, to be shocked. “It’s very intimidating,” she said. “The effect is to be intimidating.”