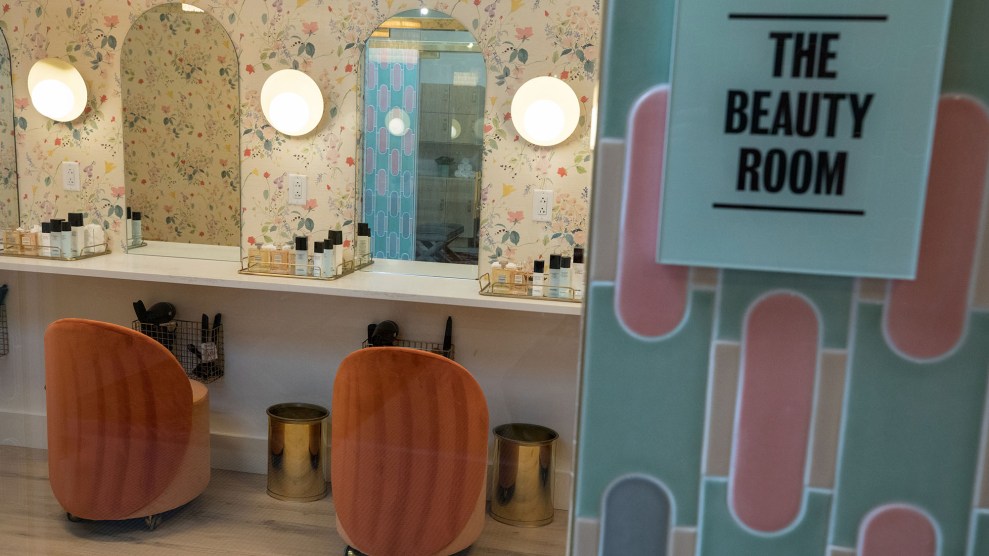 I never thought I would get to go to the Wing, the women-only co-working space and “diverse community open to all” whose demise I gleefully cheered for just a few weeks ago. I resented the place, frequented by the likes of Lena Dunham and Tavi Gevinson, because I considered its $2,350 yearly New York price tag antithetical to its stated egalitarian mission. When I visited last week to see Sen. Cory Booker (D-NJ), the first cisgender man to speak at the venue, I realized my objections were more complicated than I had thought.

As the Wing’s communications manager led me on a tour of the two-story, 10,000-square-foot SoHo location before Booker arrived, I realized that my pseudo-Marxist objections to the $215 monthly membership fees were unreasonable; the amenities are worth the price. At the SoHo Wing—one of 10 locations around the world—there are comfortable places to read or write, drenched in sunlight that filters in from floor-to-ceiling windows on the eastern wall. There are showers and complimentary hair-and-beauty products and a workout room with Peloton bikes. There are phone booths and conference rooms, a breast pump and a children’s daycare area, a convenient cafe, book clubs and private events—and all the luxuries of a space without men. A hot desk at a nearby WeWork starts at $520 per month, but the Wing seems to offer so much more.

But as much as I love the idea of a space where women can breastfeed without shame, or work in the absence of leering men, I found the millennial-pink-drenched aesthetics overwhelming and impractical, like femininity itself. The phone booths, painted with the names of fictional female characters like Hermione Granger and Ramona Quimby, seem somehow infantilizing, creating Instagram-ready expressions of feminist solidarity out of little glass rooms that would suffice to be purely functional. I thumbed a succulent plant by the window. It felt like plastic, but I couldn’t be sure. Most strikingly, the books that cover the beautiful ceiling-high shelves are arranged not by author or genre, but by color—which, the communications rep conceded, makes it hard to locate a title. Sacrificing functionality for style sounds to me a lot like trying to walk in high heels.

And many of the members wore high heels. The women waiting for Booker in folding chairs all exuded an effortless, Glossier-inspired beauty. Women sported snow-white Reeboks, somehow undefiled by the city’s grime. One applied a skillful stroke of lip gloss as Booker spoke. Marguerite Ward, writing for CNBC, noted the near-oppressive stylishness of the Wing’s clientele: “I get it: If I don’t want to dress like the stylish women around me, then that’s my prerogative…But surrounded by successful women dressed to a T, I might want to keep up.” And considering how central female beauty standards—and the rejection or acceptance thereof—are to feminist discourse, aesthetics matter.

“If the atmosphere of the whole place were a little less pink, and by that I mean a little less traditionally feminine, maybe I’d feel more comfortable,” Ward concludes, and I agree. Audrey Gelman, co-founder of the Wing and the inspiration for Marnie’s character on Girls, refers to members as “winglets.” At high points in Booker’s remarks, the audience erupted not into applause, but into a quiet chorus of snapping fingers. If only the vibe were a little less twee and the amenities a little less luxurious, and the membership price a little lower, the Wing would be a wonderland. It is, in short, like communism: a good idea, poorly executed.

But I was genuinely curious about the titles that lined the color-coded shelves—would I find a copy of The Beauty Myth?—and I hoped to browse the library before I headed out. I also thought I’d ask some of the members about their preferences for the Democratic presidential nomination and how they felt about Booker. But as soon as the New Jersey senator left the room, I was ushered to the door. I may be a woman, but Wing member I am not.