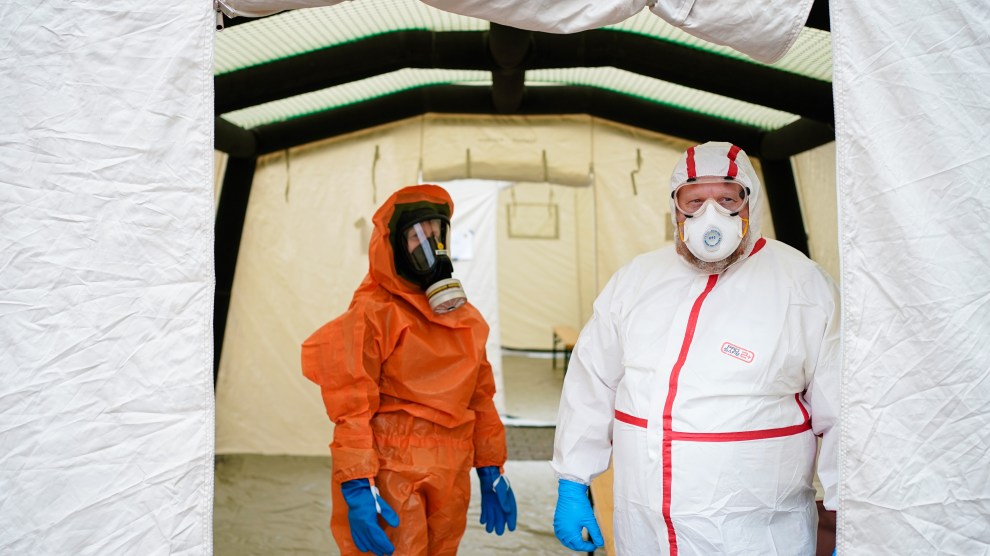 Last week, a U.S. State Department official said that fears about the spread of COVID-19 are helping fuel Russian disinformation campaigns. “The coronavirus is an example of where we have seen adversaries take advantage of a health crisis where people are terrified worldwide to try to advance their priorities,” Lea Gabrielle, who serves as special envoy and coordinator of the State Department’s Global Engagement Center, told senators during a Capitol Hill hearing.

Prior to Gabrielles testimony, Russian propaganda media outlets with ties to the Kremlin had been pushing the hoax that the coronavirus is a U.S. created bioweapon.

Iranian media has taken advantage of fears over the virus to spread conspiracies.

It turns out that Russia isn’t the only country glomming onto coronavirus fears to peddle disinformation. Iranian media organizations linked to the government have also been taking advantage of fears over the virus to spread other conspiracies. Like Russia, PressTV, an English and French news service associated with the Islamic Republic of Iran, has been focusing on pushing the idea that coronavirus is the U.S.-made bioweapon.

Russia Today, the Kremlin’s English language propaganda arm, has amplified these theories by publishing the head of the Iranian Revolutionary Guard’s claims that the virus is a bioweapon.

Clint Watts, a research fellow who focuses on global disinformation at the Foreign Policy Research Institute, has written that Iranians are pushing coronavirus conspiracies even more strongly than Russia.

Russia has gotten a good deal of attention thus far for advancing such conspiracies, but I’d assess Iran has advanced this false narrative to a higher degree and the Russian disinformation ecosystem elevates it even further. Iran’s suffering from the coronavirus outbreak and its inability to contain it incentivizes them to churn out a substantial amount of disinformation pointing to the U.S. as a culprit.

China is also pushing its own campaigns related to the coronavirus, but Watts and Rachel Chernaskey, a project manager at the same think tank, have noted that that country has been less interested in peddling disinformation and more in pushing narratives about the strength of its response compared to the U.S., which has been slow to take steps to stop the virus, in part because of the Center for Disease Control’s bungled rollout of test kits for the virus, and President Trump’s mismanagement and unwillingness to confront the implications of the disease.