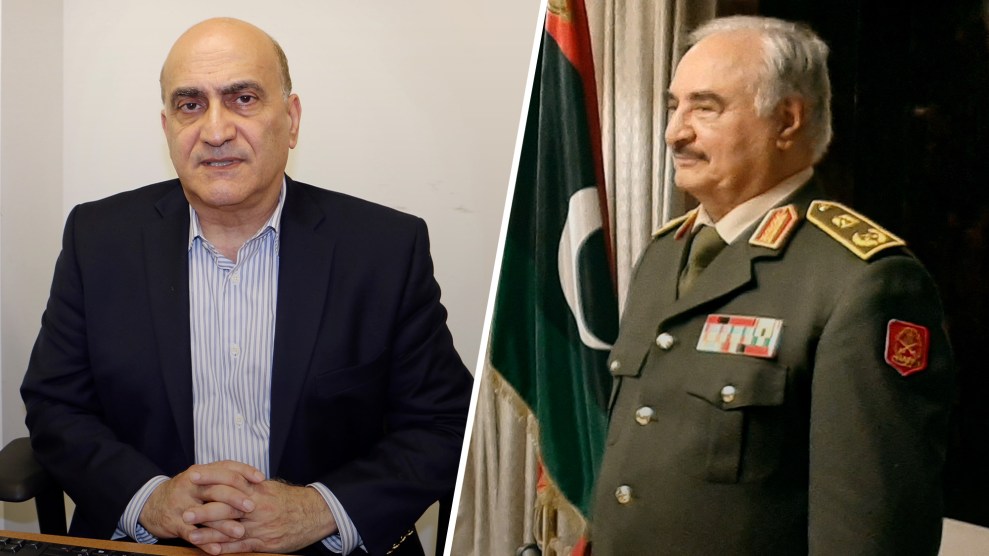 When Khalifa Haftar launched an offensive last spring to oust Libya’s internationally recognized government in Tripoli, he sought US support with a simple pitch. Haftar—a renegade general who controls the eastern part of the country—sold himself as an opponent of a terrorist-backed Tripoli government and as the best hope for stabilizing the war-torn nation. Within days, President Donald Trump placed a supportive call to Haftar. But overall, the US administration has remained largely cool to the warlord and his Libyan National Army, a coalition of militias and allied fighters. In May, a bipartisan group of lawmakers asked the Justice Department to investigate accusations that Haftar and his forces have committed war crimes. Haftar has since been sued in US courts by people who say their relatives were tortured or killed by his forces. (He has generally denied such allegations.) And questions about his military competence and his reliance on Russian and Sudanese mercenaries have left him short on backers in official Washington.

Haftar, who is a US citizen, does have his supporters, though. One of the most prominent is Walid Phares, a right-wing pundit and adviser to the 2016 Trump campaign, who for years has spoken favorably about Haftar in public remarks and social media posts. Phares contends that Haftar is preferable to the current government, which he argues is rife with jihadists. As Haftar fought to seize control of Tripoli’s airports last year, Phares tweeted on April 6 that the United States should not oppose the warlord’s offensive.

Libya National Army under #Haftar takes the control of one of #Tripoli's airports away from Islamist militias. Enters a suburb. Where do we stand? According to the #Ikhwan–#Qatar lobby, we should stand against Haftar and with the Islamist militias. But should we? Of course not

What Phares has not mentioned while touting Haftar is that Phares has explored business opportunities involving Haftar’s son, Okba Haftar. The younger Haftar lives in Northern Virginia and works in real estate. According to people involved in US-Libya relations, Okba Haftar has also helped his father advance his interests in the United States.

In response to questions from Mother Jones, a representative for Phares acknowledged that Phares has a personal and professional relationship with Okba Haftar. “Dr. Phares is a friend with Mr. Okba Haftar,” Rebecca Bynum said over email. Bynum added that the two men “often discuss regional problems and the Libya situation, as well as providing assessments of risk analysis for potential ventures. They also meet with parties who inquire about ideas and projects in the Middle East, including in Libya.” She argued, however, that the relationship falls short of an arrangement that would warrant disclosure. “Dr. Phares has no business contract binding him to Okbar Haftar,” she said. “If that should ever change, Dr Phares would certainly disclose it, but that is simply not the case at the present time.” She also stated that Phares currently has no business interests in Libya.

Bynum said the two men first met each other in 2017. She declined to say if Phares has earned any money through the risk assessments and meetings he has participated in with Okba Haftar, though she said Okba Haftar has paid Phares to translate documents from English into Arabic. Okba Haftar did not respond to requests for comment.

There’s no evidence that Phares’ relationship with Okba Haftar has impacted Phares’ public statements about Libya. Bynum said that Phares’ positions on the country are consistent with his longstanding views on the Middle East, and she noted that Phares has publicly supported Khalifa Haftar’s LNA since 2014—three years before he first met Okba Haftar.

But according to Kelly McBride, a media ethics expert at the nonprofit Poynter Institute, Phares seems to have at least “an appearance of a conflict” when it comes to his Libya commentary. Asked whether Phares should have disclosed his connection to Okba Haftar, McBride said in an email, “I personally believe that when you are presenting yourself as an expert and trying to sway someone to your position, it is honorable to reveal any real or perceived conflicts of interest.”

The timing of one potential business opportunity involving Okba Haftar overlapped with Phares’ public defense of the LNA’s 2019 offensive. On November 21, 2018, Neil Livingstone—an anti-terrorism consultant, self-styled international man of intrigue, prolific author, and former Republican gubernatorial candidate in Montana—incorporated a company in Las Vegas called Transglobal Commerce and Construction. The registration lists Phares and Okba Haftar as directors. (Haftar’s name is spelled “Hifter” in the documents.) There is no sign the company ever did any actual work. It was dissolved on April 19, 2019.

The men involved have declined to explain exactly what they hoped the firm would do. Bynum said that the business was intended to act as a “consulting company for global commerce” and that Phares “agreed to join a board of advisers when and if the company would materialize” to provide expertise. But, she noted, the firm “never materialized.” Bynum said that the registration form for the “potential company incorporation” was “done and undone by Mr Livingstone himself.”

Livingstone has a history of for-profit entrepreneurship involving Libya. In March 2011, during US-led attacks on Moammar Qaddafi’s forces, Livingstone and a group of partners reportedly pushed a plan in which they would help the dictator safely flee the country—if he paid them a massive fee, including $10 million up front. (Livingstone confirmed in an email that he was involved in this effort to arrange Qaddafi’s exit, but he said that the plan never received approval from the Treasury Department’s Office of Foreign Assets Control, which was necessary because of sanctions that office had placed on Libya. As a result, “nothing ever happened,” Livingstone said.)

Much of Libya is now under Haftar’s control, but Livingstone said Transglobal Commerce and Construction was not formed to do business in that country. “It was anticipated that it would begin with a business opportunity in the [Middle East,] but there was nothing in Libya,” he wrote.

Phares has apparently eyed other business involving Okba Haftar. In the summer of 2018, Phares helped David Correia, a Florida businessman, contact Okba Haftar to arrange a meeting about doing business in Libya, CNN reported in December. Correia proposed hiring Phares “in a possible expertise agreement,” Bynum told Mother Jones. She added that such an arrangement “never materialized.” (Last year, Correia, along with two associates of Rudy Giuliani—Lev Parnas and Igor Fruman—was charged by federal prosecutors with taking part in a conspiracy to conceal the source of foreign political contributions. A lawyer representing Correia did not respond to requests for comment.)

Phares’ calls for the United States to support Khalifa Haftar’s LNA date back half-a-decade. In April 2015 congressional testimony, he noted that he had urged US backing for “anti-Jihadist forces led by General Khalifa Haftar,” among other prescriptions for the region. In March 2017, he said in a video on Facebook that “we need to make sure that we have a strong partner in Libya—that would be the Libyan National Army” and others. This advocacy gained renewed importance in early April 2019, when Khalifa Haftar launched his surprise attack intended to quickly seize Tripoli and oust the United Nations-recognized Government of National Accord there. The effort enjoyed support from the leaders of Egypt, the United Arab Emirates, and Russia. But the UN, US State Department, and other countries called for Haftar to stand down and agree to peaceful negotiations. (Efforts by German Chancellor Angela Merkel and other European leaders to mediate the conflict broke down in January when Haftar refused to abide by a proposed a ceasefire.)

In an April 17, 2019, speech to the Westminster Institute, a think tank outside Washington that focuses on combatting extremism, Phares lamented the international community’s refusal drop support for the Government of National Accord and embrace Khalifa Haftar’s rebellion. The Tripoli-based regime, Phares said, is inundated with jihadists and the Muslim Brotherhood, a Sunni Islamist organization founded in Egypt that Phares frequently decries. Haftar, Phares argued, is “fighting the jihadists” but has been hindered by a lack of UN recognition and by American indecision on who to support in Libya.

On April 19, reacting to a White House announcement that Trump had placed a supportive phone call to Khalifa Haftar, Phares tweeted that anti-terrorism “cooperation between the US and the LNA is logical.” The same day, the company Livingstone incorporated—with Okba Haftar and Phares as directors—was dissolved. Livingstone did not respond to questions about that timing. Bynum said Phares had “no idea when this form was posted nor when it was dissolved online.”

Bynum noted that Phares’ “positions in opposing extremists, including Jihadists, are explicitly set out in his wide literature,” adding that “for over three decades, his positions and academic conclusions have been steadily consistent.”

Phares’ views are indeed consistent. A Lebanese-born Maronite Christian with a PhD from the University of Miami, he has regularly argued that Islam is expansionist, while condemning a broad swath of Muslim states, political organizations, and institutions as pro-terrorist. He wrote in a 2005 book, Future Jihad, that “jihadists within the West pose as civil rights advocates” and that “[a]lmost all mosques, educational centers, and socioeconomic institutions” in Arab Muslim communities fall into the hands of Islamic fundamentalists.

Phares sees no need to disclose his relationship with Okba Haftar when he publicly promotes the cause of Khalifa Haftar and the LNA, according to Bynum. “Dr Phares has no business interests in Libya; therefore, the question is irrelevant,” she wrote.

Still, Phares remains open to the prospect of doing consulting work in the country that the elder Haftar seeks to rule. “Dr. Phares would consider providing his professional expertise anywhere in the world,” Bynum noted, “especially in the countries of his regional expertise…including in Libya, that is, if any projects materialize.”