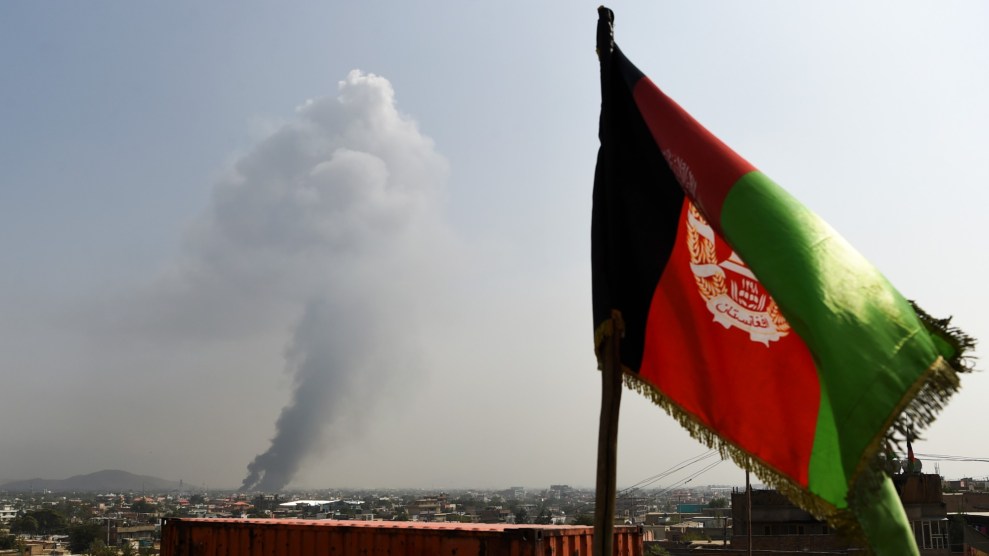 The national flag of Afghanistan rises from the site of a massive blast in Kabul, where the Taliban launched an attack in September 2019. Wakil Kohsar/AFP/Getty

The NATO-led military coalition in Afghanistan has stopped releasing details about Taliban attacks against the Afghan government even as the United States prepares to draw down its forces there, the Special Inspector General for Afghanistan Reconstruction revealed in a report Friday morning.

The decision to shield that information was another step back for Pentagon transparency and a troubling sign of turmoil following the signing of a peace agreement between the US government and the Taliban in February. The deal, which sets a 14-month timeline for a complete withdrawal of US forces, was negotiated without the Afghan government’s involvement but includes a provision requiring the Taliban to begin negotiating with Afghan leaders—a process that barely got off the ground last month and quickly ran into roadblocks.

Special Inspector General John Sopko’s quarterly report noted how far apart the two sides remain. Immediately after signing the agreement, “the Taliban increased its attacks on Afghan security forces,” Sopko wrote. Instead of revealing how many attacks took place, as it had done previously, the NATO Resolute Support mission withheld data on “enemy-initiated attacks” from investigators in Sopko’s office, known as SIGAR. This data, he wrote, “was one of the last remaining metrics SIGAR was able to use to report publicly on the security situation in Afghanistan.” The military declined to reveal the information, which is not classified, due to peace negotiations between the United States and the Taliban.

Bill Roggio, senior fellow at the Foundation for Defense of Democracies, has spent five years cataloguing how much Afghan territory falls under the Taliban’s control. (The US military used to release this information on a district-by-district basis to SIGAR, but stopped in 2018). He was not shocked by the military’s latest step to shield information about the Taliban’s brewing conflict with the Afghan government, which makes any US declaration of peace look suspect. “The data looks bad so they hide the data,” he told me. “That’s what’s going on here.”

When asked about Afghanistan on Friday, Pentagon spokesperson Jonathan Hoffman acknowledged an increase in Taliban attacks. “We are not pleased by the level of violence by the Taliban,” he told reporters on a morning conference call. “The level of attacks is not conducive to a diplomatic solution.”

The Trump administration had spent months pursuing a deal to achieve peace between the Taliban and Afghan government while allowing for a withdrawal of US troops. President Trump said last year that he was intending to bring down the number of US troops, estimated at around 13,000 currently, to 8,600 troops as part of the peace deal. The exact number of troops stationed there is not known; it’s another figure the Pentagon chooses to not disclose. Hoffman said Friday that the current level is “somewhere between 8,600 and more than that,” adding that the Pentagon was comfortable with 8,600 as a baseline level even amid the increased violence from the Taliban.

Transparency has been an ongoing issue for the Pentagon, especially during the Trump administration. Last year, Trump railed against the disclosures in SIGAR’s quarterly reports on waste, fraud, and abuse in Afghanistan and suggested they be “locked up.” During a Cabinet meeting, he told then-acting Defense Secretary Patrick Shanahan, “The enemy reads those reports; they study every line of it…I don’t want it to happen anymore, Mr. Secretary. You understand that.” SIGAR is run independently from the Pentagon and was set up by Congress to be insulated from the department, but military officials can control which information is shared with SIGAR investigators, including the amount of Taliban attacks.

Since Trump took office, the Pentagon has stopped reporting the number of US troops in Afghanistan, Iraq, and Syria while substantially curbing its access to the press under James Mattis, Trump’s first secretary of defense. (Mark Esper, Mattis’s successor, restored regular briefings, and during the coronavirus crisis the department has held several briefings per week.)

Earlier this month, I reported on the department’s request to classify its future defense spending plans, which would eliminate an important resource for reporters and lawmakers to hold the department accountable to its spending projections. At a time when the defense spending is increasingly on the rise, these projected figures are especially important. The department also chose in late March to withhold data on coronavirus infections specific to a military base or installation, which it justified as a precaution needed to stop adversaries from seeing where the military is most vulnerable. Ten Senate Democrats, in a blistering letter to Esper on Monday, said the decision “has sowed fear within both military and civilian communities” by preventing residents near these installations “to know how widespread the illness may be in their own backyard.”