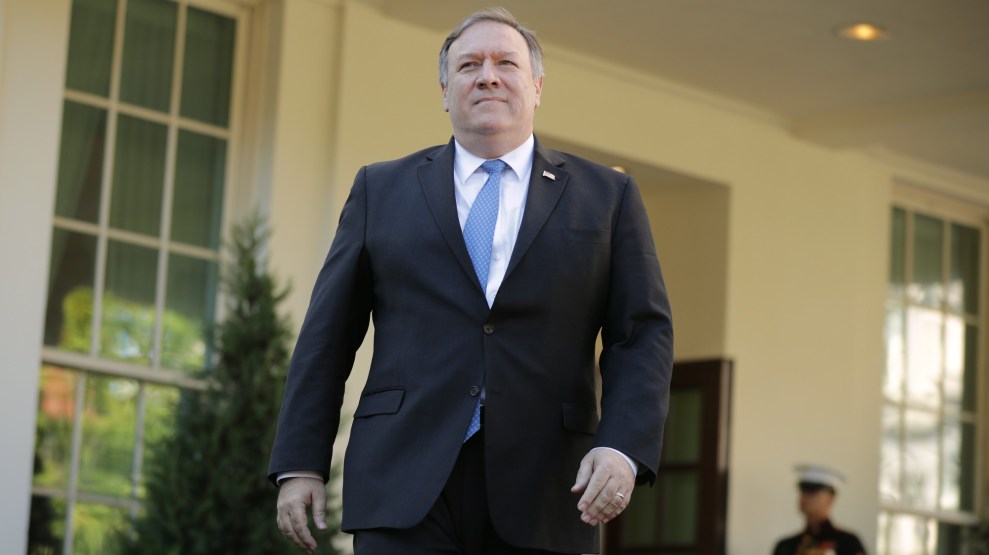 The most shocking thing about President Donald Trump’s decision to fire State Department Inspector General Steve Linick on Friday was how routine and predictable it felt. Linick, the fourth independent watchdog the president has recently purged, had been investigating Secretary of State Mike Pompeo and his wife, Susan, for allegedly misusing staff and had been wrapping up a probe into Trump officials’ efforts last year to accelerate arms sales to Saudi Arabia and the United Arab Emirates. Already unpopular within Pompeo’s inner circle thanks to a series of reports showing retaliation by State higher-ups against career officials, Linick experienced the same fate that’s befallen other qualified, independent-minded bureaucrats in the Trump era. To the increasingly morose staff of State Department lifers, Linick’s demise was one of many sad reminders of how the paranoid regime Pompeo has put into place privileges loyalty over competence.

“If your body is numb all over, can you still respond to shock?” says Tom Countryman, a longtime foreign service officer who served as acting undersecretary for arms control and international security under President Barack Obama. “I think it would be difficult to shock State Department employees at this point with anything the president or secretary does.”

In recent months, Pompeo has not even tried to disguise his lack of interest in defending career diplomats from Trump. He didn’t stand up for Marie Yovanovitch—the former ambassador to Ukraine who was pushed out as part of a baseless conspiracy theory painting her as disloyal—after Trump slimed her on Twitter. Despite being pushed internally by an adviser to issue a statement of support for Yovanovitch, Pompeo reportedly declined. An NPR reporter tried to get a response from him in January about it, but Pompeo threw a fit and deflected—far from the first time he’s been hostile to the news media when pressed with a tough question.

Part of the reason Pompeo apparently soured on Linick was a “pattern of unauthorized disclosures, or leaks,” from the IG’s office, Brian Bulatao, the State Department’s undersecretary for management, told the Washington Post. Bulatao also bizarrely criticized Linick for “not promoting Pompeo’s professional ethos statement, laying out basic principles of respect and dedication, through training sessions and other activities.” Pompeo’s own defense of the firing was even stranger. He told the Post that Linick, who took over as State’s internal watchdog in 2013, was not “performing a function” that was “additive for the State Department.”

Linick might not have been beloved—few inspectors general are—but he at least had a track record of fairness, investigating Hillary Clinton’s use of private email and Pompeo’s support for weapon sales to the Saudis with equal aplomb. If there was some persuasive justification for canning him, Trump offered no sign of it on Monday when reporters asked about it. He made no mention of an “ethos statement” or “additive” function. In fact, Trump said that he had “never heard of” Linick and only fired him after Pompeo recommended it.

While Trump has wide latitude to fire inspectors general for any reason, it is against the law for the secretary of State to “prevent or prohibit” an IG from conducting an investigation. Pompeo has said he was not aware Linick was investigating whether he misused staff, but he acknowledged during a press conference Wednesday that he had answered questions in writing related to the arms sales probe. Congressional Democrats have already opened their own investigations into the circumstances of Linick’s ouster, and moderate Republicans such as Sens. Mitt Romney (R-Utah) and Susan Collins (R-Maine) voiced concerns about Trump’s decision to remove him seemingly without cause. In an all-too-familiar twist, Trump tapped Ambassador Stephen J. Akard, a former adviser to Vice President Mike Pence, as Linick’s replacement, despite Akard’s existing role as director of State’s Office of Foreign Missions. Akard, a political appointee, will now “have oversight of and access to all confidential inspector general information, including whistleblower complaints and identities,” Sen. Chuck Grassley (R-Iowa) wrote in a letter to Trump on Monday.

Morale in the State Department had already been low in 2018 when Pompeo took over for Rex Tillerson, a former oil executive who was widely unpopular among State’s rank and file. After promising to restore the “swagger” to the department during his first speech as secretary, Pompeo has done the opposite—overseeing a brain drain among career staff and watching his own internal approval ratings plummet. Senate Republicans, and even Trump himself, have made no secret of their effort to encourage him to run for the open Senate seat in Kansas, though Pompeo has so far refused to enter the race.

While Tillerson sparked anger by instituting a 16-month hiring freeze and pushing through an unpopular restructuring plan, he was not particularly close with Trump and was valued in some circles for his efforts to push back against the president’s isolationist leanings. Pompeo, on the other hand, is joined at the hip with Trump on policy, especially pertaining to Iran. But like Tillerson, Pompeo has become neglectful, even scornful, when it comes to filling important State positions with career staff. Several crucial roles lack permanent appointees, including the undersecretary for civilian security, democracy and human rights, as well as the assistant secretary positions overseeing the Europe and South Asia bureaus. Laura Kennedy, a retired foreign service officer who served as ambassador to Turkmenistan under George W. Bush, said the practice of leaving so many positions without a qualified appointee represents “an unprecedented swipe at the competence, the importance, and the value of career officials.”

Since Trump took office, that kind of behavior has been the norm. More donors, party bigwigs, and other inexperienced diplomats have been added to the ambassadorial ranks under Trump than at any point in nearly eight decades. Think of folks like Gordon Sondland, the bumbling hotelier who Trump named ambassador to the European Union before coming to regret it once Sondland emerged as a crucial witness during Trump’s impeachment hearings. Pompeo has cultivated this kind of elite circle of friends, too. On Tuesday, NBC News reported that Pompeo and his wife would regularly host billionaires, Supreme Court justices, and business titans for lavish dinners in Foggy Bottom. The list of invitees was short on actual diplomats or foreign service officers, raising concerns internally that Pompeo was using the dinners to shore up his political base at the government’s expense.

If he does end up running for the Senate, the decision will come soon. The filing deadline is June 1, meaning this could be Pompeo’s swan song at the State Department. If so, don’t expect the department’s staff to mourn a change in leadership.