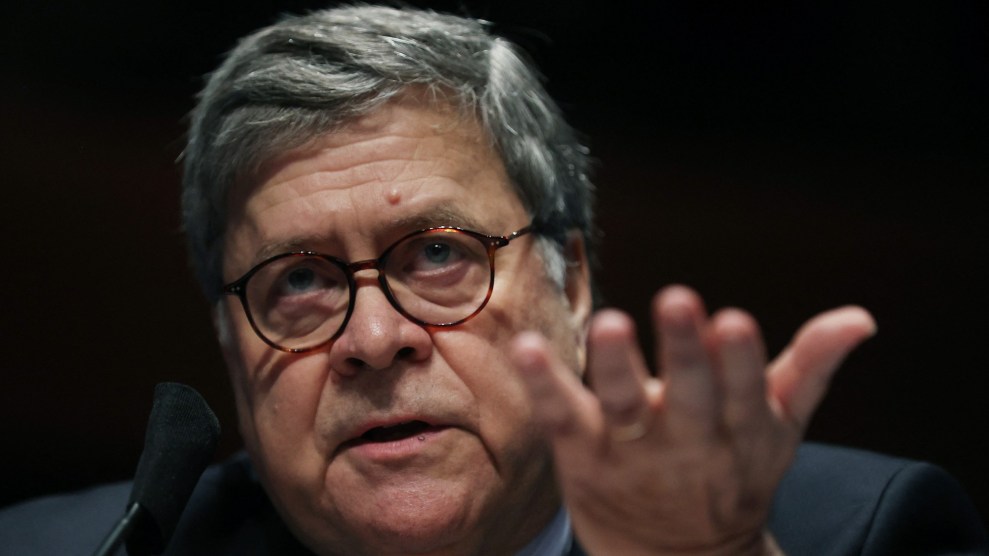 Attorney General William Barr is nothing if not consistent, and his visit today to Congress proved it. It also proved he’s not great with this whole honesty thing.

Testifying Tuesday before confrontational Democrats and obsequious Republicans on the House Judiciary Committee, Barr stuck to his claims that President Trump has never asked him to intervene in any federal criminal cases. But for a guy who says he hasn’t been pressured, Barr has been awfully helpful to Trump on issues related to what the attorney general on Monday called the “bogus Russiagate scandal.”

Throughout the nearly daylong hearing, Barr made a slew of misleading statements. Here are a few of today’s worst offenders:

Barr, under questioning by Rep. Eric Swalwell (D-Calif.), said that he was unaware that Trump had tweeted that his longtime adviser Roger Stone showed “guts” by vowing not to testify against him. Earlier this month, Trump commuted the three-year prison sentence Stone was facing after being convicted for perjury, obstruction of Congress, and witness tampering. Evidence at Stone’s trial showed Stone in 2016 communicated with Trump about WikiLeaks’ plans to release Democratic emails stolen by Russia and that Trump probably lied to special counsel Robert Mueller about those conversations. Swalwell suggested that Trump had obstructed justice by effectively promising to reward Stone if he kept quiet, and then actually following through with that promise. But Barr said he wasn’t even aware of Trump’s many public statements on this topic.

Here’s the problem with that: Mueller’s report on the Russia investigation described Trump’s tweets lauding Stone’s “guts” and referred to a Trump interview with the New York Post in which the president praised Stone as “actually very brave” for vowing not to cooperate with Mueller. The report specifically cited both statements as evidence of possible obstruction of justice by Trump. And Barr claims he independently concluded last year there was not enough evidence to indict Trump for obstructing justice—after reading Mueller’s report. How could Barr conclude that if he didn’t review Mueller’s findings on the topic specifically?

In response to Swalwell's questions, Barr claims he was unaware of the President's tweets praising Stone for having "guts" not to testify. But it's in Volume II of the Mueller report, which Barr claimed to have reviewed to reach a conclusion there was no obstruction. pic.twitter.com/LCouAwl73k

Barr had other trouble with questions about Stone. Ahead of Stone’s sentencing in February, the attorney general intervened to override the sentencing recommendation of career prosecutors on the case, which called for a seven-to-nine-year sentence, and force subordinates to instead suggest a shorter sentence. Barr did this the day after Trump tweeted an attack on prosecutors’ original sentencing recommendation, but Barr claims his action was not caused by the president’s tweet.

On Tuesday, Rep. Ted Deutch (D-Fla.) questioned that intervention, noting that the prosecutors’ original sentencing recommendation was stiff in part because “Stone threatened to kill a witness,” and federal sentencing guidelines impose longer sentences for violent threats. Deutch was citing an April 2018 email that Stone sent to comedian Randy Credico, who was then threatening to give investigators information showing that Stone had lied to Congress. “Prepare to die cock sucker,” Stone wrote. But Barr told Deutch that “the witness”—Credico—”didn’t think” Stone was really threatening him. While Credico did indeed say in a letter to the judge that Stone “never posed a direct physical threat” to him, Credico also told a grand jury and has said publicly that he feared that Stone, who has a large social media footprint, would incite violence against him.

Responding to previous similar assertions from Barr, Credico told me last month that he finds it “deeply disturbing and cynical for Attorney General Barr to have mischaracterized my letter to Judge Jackson to justify his ominous purging of the Justice Department on behalf of his client Donald Trump.”

Barr also went along with a false statement from Rep. Jim Jordan (R-Ohio) on the now somewhat infamous “unmasking” kerfuffle. Jordan (again) alleged that documents released in May show that former Vice President Joe Biden and former FBI Director James Comey were among the Obama administration officials who had asked to “unmask” the identify of former Lt. General Michael Flynn in reports compiled by a US intelligence agency, in which Flynn’s identity as an American citizen would normally be hidden. This is false. Jordan confused things: Biden and Comey were listed among officials who were authorized to review intelligence reports in which Flynn was identified, according to the material declassified in May by former national security adviser Richard Grenell. But, as we’ve reported, nothing in those documents says either man ordered that Flynn be “unmasked.” In fact, the documents do not say who ordered Flynn’s “unmasking.”

Jordan, a Trump ally, pretty clearly mentioned Biden in an effort to harm his chances of defeating Trump in November. Barr probably knows that, but he went along with Jordan’s claim anyway, even noting that he has ordered the US Attorney for the Western District of Texas to look into the unmasking issue. That’s one of at least four ongoing investigations by various US attorneys that Barr has ordered up in an effort to undermine the origins of Mueller’s investigation, which concluded that the Trump campaign sought to benefit from Russian help in 2016.

The power to fire

Maybe Barr’s most striking evasion came late in the hearing when Rep. Joe Neguse (D-Colo.) pressed the attorney general about his firing of Geoffrey Berman, formerly the US attorney for the Southern District of New York, whose office is conducting several investigations into Trump associates. Neguse asked Barr about a public statement he issued on Friday June 19, 2020, claiming Berman was “stepping down.” At the time, Berman was not stepping down; in fact, he was refusing to do so, and had personally told Barr that. Berman did later agree to leave the job after Barr backed off an effort to replace him with a prosecutor from outside the Manhattan office, but that June 19 statement was a lie. Barr would not admit that when Neguse asked him if his statement was true at the time the department issued it. “He may not have known it, but he was stepping down,” Barr said, then smiled.

Rep. Joe Neguse: On June 18, your Department of Justice issued a statement that Geoff Berman had stepped down as US Attorney. Was that statement true at that time?

Bill Barr: Uh, he may not have known it, but he was stepping down. pic.twitter.com/WmYqxS1dKo