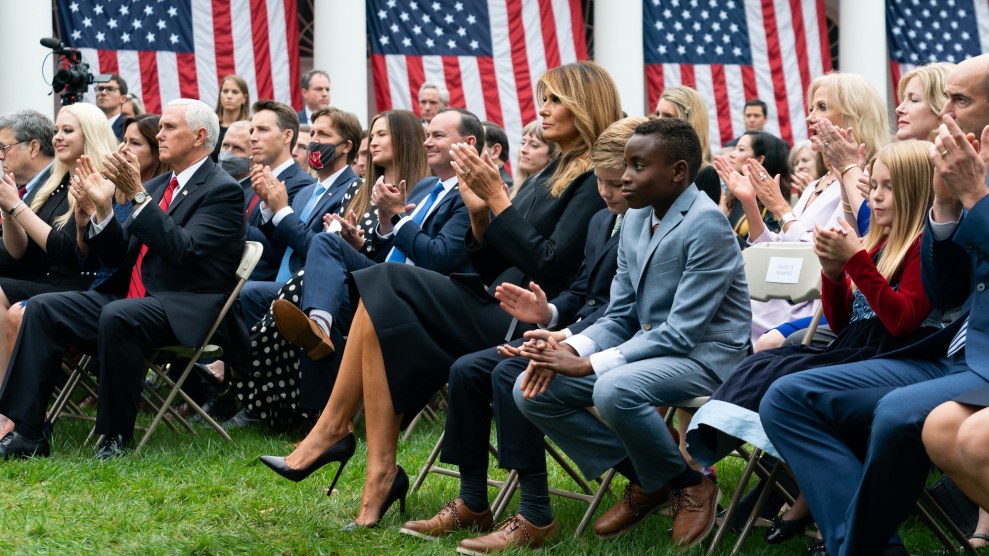 The White House ceremony to honor Amy Coney Barrett’s nomination to the Supreme Court on September 26 was supposed to be the kickoff for the capstone achievement of President Donald Trump’s first term. Trump’s bungled response to the pandemic had been looming over his reelection bid and threatened to take much of his party down with him. But the death of Ruth Bader Ginsburg had reset the terms of the election to turf Republicans like best: Lifetime judicial appointments of conservative justices to the nation’s highest court.

But one week later, any lingering optimism from the ceremony vanished in a record-scratching halt. The Thursday announcement that former White House communications director Hope Hicks had tested positive for COVID-19 was just the starting point for a series of coronavirus diagnoses among Trump’s inner circle and GOP allies including, of course, the president himself. Vice President Mike Pence has, so far, twice tested negative for the virus.

Many of them had been in close quarters at Barrett’s ceremony. While the public festivities were held outdoors in the Rose Garden, attendees mingled in close quarters at indoor receptions throughout the day. In the days since, those GOP insiders have gone about their business on Capitol Hill, in the White House, and on the campaign trail—nearly always maskless.

The spread of the virus now threatens to cripple both the president’s campaign in the final weeks of the race and Republican efforts to rush Barrett through the judicial nomination process. On Friday night, Senate Judiciary chairman Sen. Lindsay Graham (R-S.C.) insisted that confirmation hearings would commence as planned on October 12, even though two Republican members of the committee have tested positive for the disease. The precarious moment now facing the GOP has occurred only because they have followed Trump’s example throughout the course of the pandemic: Ignoring the science and flouting the rules.

Here’s a list of all of the Republicans who have tested positive for coronavirus since last Saturday:

Hope Hicks: On Thursday, Bloomberg reported that former White House communications director and current senior aide was the first of Trump’s inner circle to receive a positive diagnosis. She had been in close proximity to the president and his campaign staff during prep sessions in advance of Trump’s debate against Joe Biden last Tuesday and traveled with the president to and from his campaign rally in Minnesota on Wednesday night.

President Donald Trump: President Trump announced that he and First Lady Melania Trump had tested positive for the virus on Twitter early Friday morning. Reports suggested his condition had worsened throughout the day, and, on Friday night, he was flown by helicopter to Walter Reed Medical Center in Bethesda, Maryland, for treatment and monitoring. The president is being treated with an experimental Regeneron antibody cocktail and remdesivir, an anti-viral medication recently approved by the FDA to treat severe cases of COVID-19.

First Lady Melania Trump: The White House said in a statement that the first lady “remains well” with only a mild cough and a headache. No other member of the Trump family has tested positive thus far.

Sen. Mike Lee (R-Utah): Lee is a member of the Senate Judiciary Committee, the congressional body that oversees judicial nominations and confirmations. He announced that he tested positive on Thursday after experiencing “allergy-like” symptoms. He had attended the Rose Garden ceremony last Saturday, where he was seen hugging several guests. He has been in several meetings with fellow senators on Capitol Hill since.

Sen. Thom Tillis (R-N.C.): Tillis, another member of the Senate Judiciary Committee, had also been at the Rose Garden ceremony at the White House last weekend. He does not have any symptoms but will self-isolate for 10 days.

Kellyanne Conway: The daughter of the former White House adviser alerted the world to her mother’s diagnosis via TikTok on Friday night. Conway had been at both Barrett’s Rose Garden ceremony and in debate prep sessions with the president.

Chris Christie: The former New Jersey governor and Trump adviser announced Saturday morning that he had tested positive. With Hope Hicks and campaign manager Bill Stepien, Christie was one of the inner circle who prepared the president for his debate against former Vice President Joe Biden.

I just received word that I am positive for COVID-19. I want to thank all of my friends and colleagues who have reached out to ask how I was feeling in the last day or two. I will be receiving medical attention today and will keep the necessary folks apprised of my condition.

We will be updating this story.