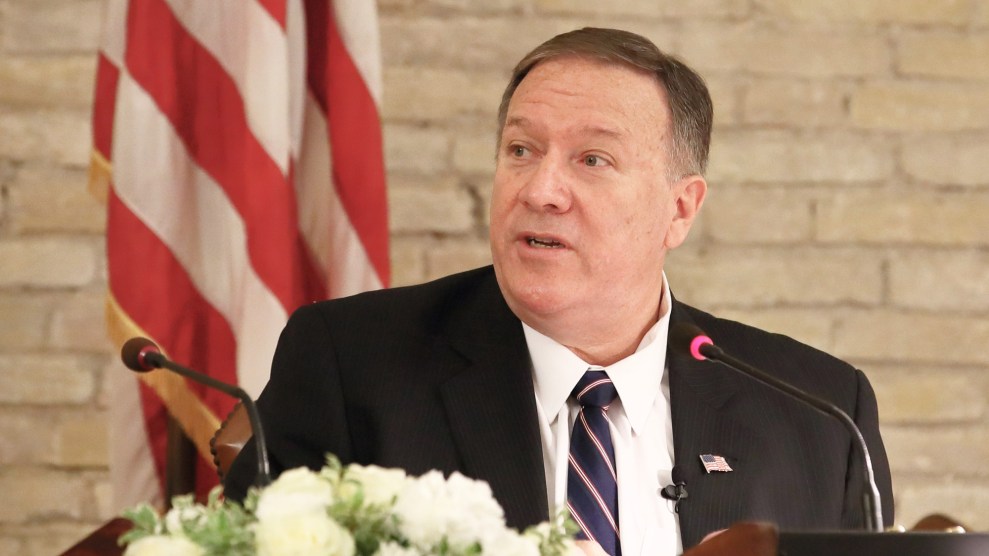 Secretary of State Mike Pompeo attends an event in Vatican City during his trip to Europe in October 2020.Vatican Pool/Getty

Before taking a long-scheduled trip to Rome last week, Secretary of State Mike Pompeo did perhaps the last thing you would expect from a diplomat planning to meet with Pope Francis. He launched a public critique of the Catholic Church, calling on the pope to end an arrangement between the Vatican and China that permits shared input on the appointment of bishops. “The Vatican endangers its moral authority, should it renew the deal,” Pompeo tweeted late last month.

The criticism stunned Vatican officials, who promptly declined Pompeo’s request for a meeting with Francis last week. Popes do not regularly meet with US officials so close to a presidential election and, perhaps conscious of his own polarizing reputation in the United States—many conservatives distrust him—Francis was wary of such a meeting. When asked if Pompeo’s visit to Rome sought to “exploit” Francis in the run-up to the election, Archbishop Paul Gallagher, the Vatican foreign minister, suggested as much. “Well, that’s one of the reasons why the Holy Father is not receiving the secretary of State,” Gallagher said.

It was the latest undiplomatic move for America’s chief diplomat, who has looked more like a bulldog campaign surrogate than a polite secretary of State in recent weeks. Four days before leaving for Europe, Pompeo gave a highly-politicized speech in front of the Wisconsin legislature that lambasted China and affirmed his narrow, nationalist view of the world. This speech came on the heels of other controversial domestic appearances—including at a megachurch in Texas and at the religious right’s Value Voters Summit in Washington, DC—that seem almost micro-targeted to Christian conservative voters. Similar behavior by any other secretary of State would be unprecedented, but for Pompeo, it’s become just the most visible evidence of his push to use the power and influence of the State Department as a tool for Trump’s reelection campaign.

“It is absolutely all about domestic politics for Secretary Pompeo and has been since he joined the administration,” says Tom Countryman, a former State Department official who now chairs the Arms Control Association, a group that opposes nuclear proliferation. “He has not been much more subtle than the president in utilizing the tools of the government to advance, not just a policy agenda, but an electoral politics agenda. It has become more blatant in the last few months.”

Even as his own department issues guidance reminding staff not to “improperly engage the Department of State in the political process,” Pompeo has used the trappings of his office to promote Trump and appeal to his conservative religious base. When Pompeo appeared at the Republican National Convention—the first time in more than 75 years that a sitting secretary of State addressed a convention—he did so while on an official government trip to Jerusalem and surrounded by religious imagery: “with the lights of the Old City and its Jewish, Muslim and Christian shrines visible over his shoulder,” as the New York Times put it.

Pompeo’s clash with the pope appears to have been similarly geared toward appealing to conservative Catholics and evangelical Christians, who have become increasingly aligned in the United States even as Francis and his allies have criticized aspects of the American evangelical tradition, including the “prosperity gospel.” Before heading to Rome, Pompeo even published an op-ed criticizing the Vatican in First Things, a conservative research journal whose editor has been harshly critical of Francis. The unorthodox op-ed surprised the Vatican and Foggy Bottom in equal measure. It “was not cleared by a damn person in the State Department,” a department official told me.

Massimo Faggioli, a Villanova University professor who studies the Catholic Church, told me that attacks on Francis, who is still generally popular among American Catholics, could help turn out the more politically engaged faction of conservative Catholics who despise his progressive approach on some issues, including his attention to climate change and critique of capitalism. “My impression is that there’s more mobilization of anti-Francis Catholics voting for Trump than Francis Catholics voting for Biden,” he said.

Religious freedom, which is central to Pompeo’s foreign policy rhetoric and his criticism of China, remains a compelling issue for conservative voters, especially evangelicals. While just 35 percent of US adults think their religious freedom is under threat, 46 percent of evangelicals believe that to be the case, according to a poll conducted earlier this year by the Associated Press and the University of Chicago.

Pompeo, himself a devout evangelical Christian, has used religious freedom as a cudgel against traditional US adversaries such as China and Iran, but, like Trump, tends to ignore the plight of Christians and other religious minorities in allied countries, such as Saudi Arabia. His creation of a Commission on Unalienable Rights, which produced a report delineating religious freedom as a paramount right, is another not-so-subtle nod to the evangelical base. The report deemed marriage equality and abortion rights to be nothing more than “divisive social and political controversies,” not basic human rights, and gave institutional credence to the State Department’s increasingly hostile policies toward LGBTQ people.

Given Pompeo’s shameless interest in furthering Trump’s political fortunes (and his own), it was no surprise that the campaign tried to solicit him as an actual surrogate. During a hearing before the House Foreign Affairs Committee last month, State Department acting legal adviser Marik String was asked if Trump had requested that Pompeo appear at one of his campaign rallies in October or November 2019. While evading the particulars of the question, String substantially confirmed it by saying, “As I recall, there was a period in 2019 when that issue that you raised came up, and it was reviewed.”

Pompeo never appeared onstage with Trump at a rally, but in his official capacity, but he’s constantly made time to meet with conservative donors and party bigwigs. Last October, he even visited his home state of Kansas to discuss a possible Senate run with conservative megadonor Charles Koch. It was one of several taxpayer-funded trips he took to Kansas ahead of the filing deadline in that race, which he ultimately did not join. He was investigated and then cleared of violating the Hatch Act, which prohibits political activity by government officials, in relation to his visits to Kansas. But Pompeo has never seemed too concerned about his behavior breaking department norms or even federal law. In May, Pompeo asked Trump to fire Steve Linick, the department’s inspector general, who was investigating Pompeo’s role in pushing through weapons sales to Middle Eastern allies and allegations that Pompeo’s wife, Susan Pompeo, had used department staff to run personal errands. Trump complied. In his statements to the press after Linick’s removal, Pompeo showed how disdainfully he views rank-and-file government employees. Linick, Pompeo told the Washington Post, was “undermining” the department and not performing a function “that was additive for the State Department.”

Linick, as inspector general, was not supposed to serve Pompeo’s interests, just as Pompeo, as secretary of State, is supposed to be an emissary for the entire country, not for Trump’s campaign. That message doesn’t appear to resonate with the Trump administration’s ultimate team player, who has survived longer than almost any other member of the president’s inner circle by never confusing the right thing—the responsible thing—with what best serves Trump’s interests.