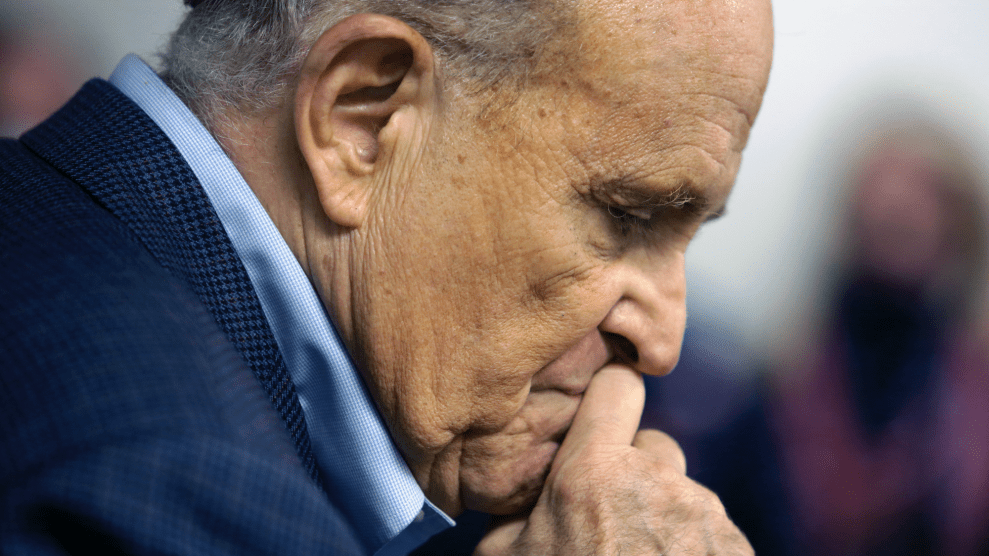 Rudy Giuliani said Wednesday that George Soros, the billionaire financier and philanthropist, who is Jewish, is the cause of a federal investigation into Giuliani’s activity involving Ukraine, a baseless allegation that deploys an anti-Semitic troupe of a wealthy Jew secretly controlling world events.

The former New York mayor appeared Wednesday morning on a radio show and podcast hosted by Steve Bannon, who is himself facing federal fraud charges, to promote a dubious New York Post story that Biden’s son Hunter had tried to arrange a meeting between his father and a board member of a Ukrainian company paying Hunter. But Giuliani first complained about the damage his reputation has suffered due to his attempt to solicit dirt on the Bidens from Ukraine, an effort that also contributed to the impeachment of his client, Donald Trump, last year.

“They tried to destroy me,” the Giuliani said, without specifying who he meant. “They tried to take away my livelihood. They harassed me. They said terrible lies about me.” Giuliani then noted that prosecutors in the Southern District of New York, a DOJ office he led in the 1980s,  last year launched “some kind of investigation into me that I can’t even figure out, as if I am some kind of criminal.”

“I think that is the work of George Soros,” Giuliani said. “I think a lot of this is.”

Giuliani did not respond to a text message asking him to explain his claim. A Southern District spokesman declined to comment.

Patrick Gaspard, president of the Open Society Foundations, a nonprofit funded by Soros that dispenses grants to boost democracy and civil society around the world, denounced Giuliani’s comment in a statement to Mother Jones on Wednesday.

“If I were under investigation by the office I once led, I would be desperate to distract attention from the many potential criminal abuses the SNDY is looking at,” Gaspard said. “Rudy is seeing ghosts here at Halloween. George Soros has nothing to do with Rudy’s legal woes and it’s time for responsible figures in the conservative movement to denounce these baseless and anti-Semitic theories, wherever they may appear.”

Soros is a financial backer of Democrats in the United States. But his international giving is more broadly aimed at promoting democratic institutions and human rights. Through the Open Society Foundations, Soros, who grew up in Hungary, has supported anti-corruption efforts in Central and Eastern Europe. That includes providing 17 percent of annual funding for AntAC, a Ukrainian anti-corruption organization. By exaggerating that fact, and by citing largely debunked reporting by former Hill columnist John Solomon, Giuliani and his allies have concocted the claim that Soros worked to oppose Trump’s interest in Ukraine, as my colleague Dan Spinelli explained last year.

The same supposed evidence formed the basis for an especially unhinged rant on Fox News last year in which Joe diGenova, a lawyer who supported Giuliani’s efforts in Ukraine, claimed that Soros controls a “very large” part of the State Department. This claim resulted in Fox News banning diGenova and his wife, Victoria Toensing, an action diGenova later said shows the station is “compromised when it comes to Soros.”

Invoking #Soros as controlling the State Dept, FBI, and Ukraine is trafficking in some of the worst anti-Semitic tropes. @FoxNews won’t have Chris Farrell on for making similar remarks, and they should hold the same standard for @JoeDiGenova. https://t.co/IbCQCdXZfL

In alleging that Soros is now calling shots in the Justice Department as well, Giuliani expanded the conspiracy theory.

You can find Giuliani’s claim about Soros at around the 9:45 mark here: