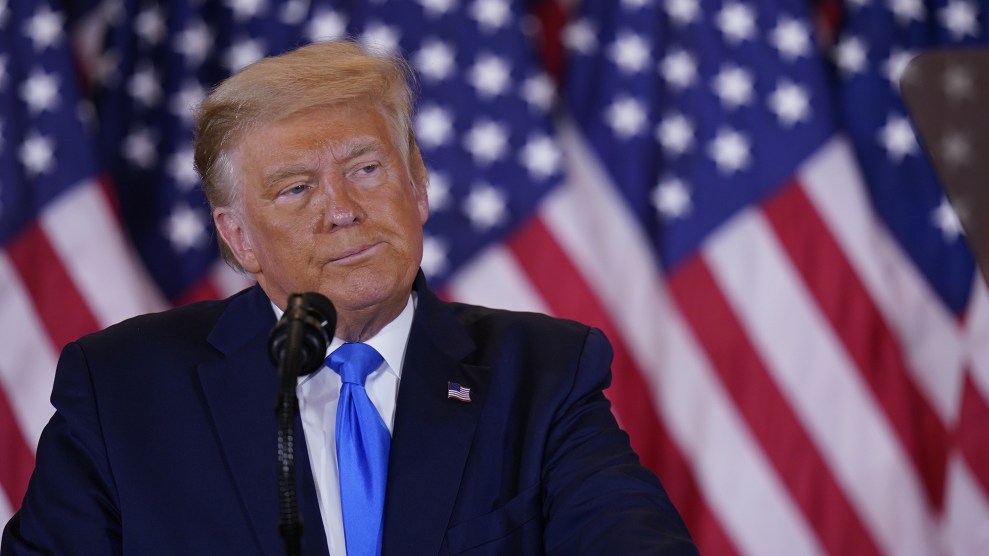 The TV networks have declared Joe Biden the next president of the United States. World leaders have congratulated him. Biden’s transition team is moving ahead. Courts have repeatedly tossed allegations of fraud or misconduct alleged by the Trump campaign to try to block the result. The race is over. But most Republicans in office refuse to admit that.

On Fox News, Sen. Lindsey Graham (R-S.C.) called the election “contested” and said Trump was right not to concede.

“This is a contested election,” Lindsey Graham says on Fox. “President Trump should not concede.”

On the same network, House Minority Leader Kevin McCarthy (R-Calif.) agreed that the race isn’t over until all of the Trump campaign’s legal challenges are heard—though there’s no evidence to back up those challenges.

House GOP Leader Kevin McCarthy, who hasn’t commented on Biden’s victory, says to Bartiromo that “every legal challenge should be heard” in the presidential race. “Why would you call the presidential race first?” pointing to how some House races haven’t been called yet

On ABC’s This Week, George Stephanopoulos grilled Sen. Roy Blunt (R-Mo.). “Joe Biden has won this election. Why can’t you acknowledge it?” Blunt, in turn, called on Trump’s team to lay its cards on the table. “It’s time for the president’s lawyers to present the facts and then it’s time for those facts to speak for themselves,” he responded. But he acknowledged that it is unlikely that any litigation or further ballot-counting will lead to a Trump victory.

Thus far, it appears only GOP Senators Lisa Murkowski of Alaska and Mitt Romney of Utah have acknowledged Biden’s victory. Senate Majority Leader Mitch McConnell has not had any contact with the Biden team, and neither has the White House. Meanwhile, on Sunday morning, President Trump continued to baselessly claim the election had been stolen with voter fraud.

“You have the president sitting in the White House not acknowledging” the outcome, Trump ally and former Republican New Jersey Gov. Chris Christie said on ABC. “And I think there are lots of Republicans who are trying to feel their way around that.”

The GOP is still Trump’s party, and even when it comes to our democracy, Republicans are still beholden to his rantings. The question is, for how much longer?