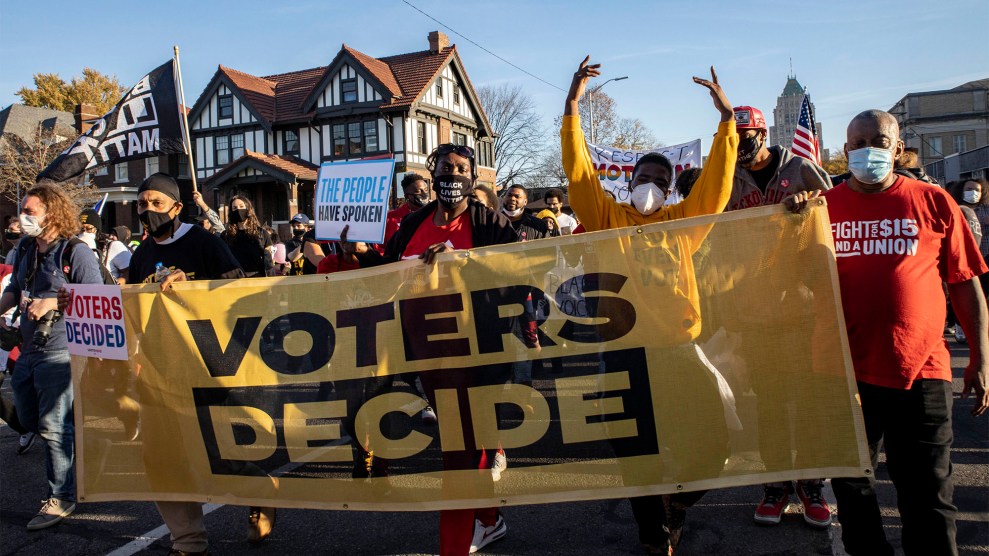 On Tuesday night, when two Republicans on the canvassing board in Wayne County, Michigan, initially refused to certify the election results, GOP board chair Monica Palmer said she would be open to certifying the results in “communities other than Detroit.”

It was a revealing statement: Palmer raised no concerns about unproven irregularities in other parts of the county but was willing to block hundreds of thousands of votes in a city that is 78 percent Black and voted 94 percent for Joe Biden.

Singling out Detroit reflects a broader legal strategy by the Trump campaign to challenge votes in heavily Democratic cities with large concentrations of Black voters, like Detroit, Milwaukee, and Philadelphia. Though the Trump campaign has produced no evidence of voter fraud, it is clearly signaling through its strategy that such fraud can only be committed in Democratic areas with large numbers of Black voters.

“Really the themes that we see, that persist, are this: Black people are corrupt, Black people are incompetent, and Black people can’t be trusted,” Michigan Attorney General Dana Nessel, a Democrat, said last week. “That’s the narrative that is continually espoused by the Trump campaign and their allies in these lawsuits.”

In Michigan, the Trump campaign has filed litigation to throw out the results in only Wayne County, which would disenfranchise 750,000 voters and half the state’s Black population. GOP activists tried to disrupt the counting of votes in Detroit after Election Day, and GOP poll watchers said they felt threatened by election officials who wore clothes that said Black Lives Matter.

In Wisconsin, the Trump campaign has requested a recount in only two counties, Milwaukee and Dane (home to Madison), which together comprise nearly three-quarters of the state’s Black population. Both counties voted overwhelmingly for Biden.

In Pennsylvania, the Trump campaign’s legal strategy has centered on throwing out votes cast in Philadelphia, which is 44 percent Black and where nearly half of the state’s Black voters live. Trump falsely claimed there was a “mountain of corruption” in the election there.

These efforts are not likely to succeed. The Trump campaign has lost nearly every major post-election case in court and has not prevented votes from being counted anywhere or changed in Trump’s favor in any substantive way. But by spreading baseless charges of fraud in heavily Black areas, Republicans are laying the groundwork to make it harder to vote for these communities in the future—just as voter suppression efforts have targeted Black voters throughout US history.